不用再找了，arduino资源帖，持续更新_arduino吧. DIY Cellphone. An exploration into the possibilities for individual construction and customization of the most ubiquitous of electronic devices, the cellphone. By creating and sharing open-source designs for the phone’s circuit board and case, we hope to encourage a proliferation of personalized and diverse mobile phones. Freed from the constraints of mass production, we plan to explore diverse materials, shapes, and functions. We hope that the project will help us explore and expand the limits of do-it-yourself (DIY) practice. How close can a homemade project come to the design of a cutting edge device? What are the economics of building a high-tech device in small quantities? The initial prototype combines a custom electronic circuit board with a laser-cut plywood and veneer enclosure. 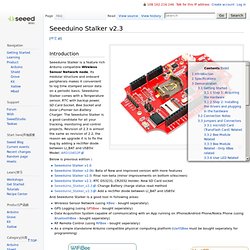 Its modular structure and onboard peripherals makes it convenient to log time stamped sensor data on a periodic basis. Seeeduino Stalker comes with a Temperature sensor, RTC with backup power, SD Card Socket, Bee Socket and Solar LiPoimer Ion Battery Charger. The Seeeduino Stalker is a good candidate for all your tracking, monitoring and control projects. ECE4760 TinyRealTime. Cornell University ECE4760 A preemptive kernel for Atmel Mega1284 microcontrollers Introduction It is useful to be able to write several small tasks running on a microcontroller, as if each one were the only program running. 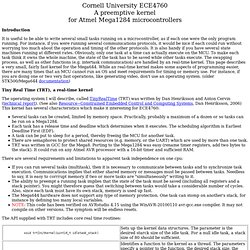 For instance, if you were running several communications protocols, it would be nice if each could run without worrying too much about the operation and timing of the other protocols. It is also handy if you have several state machines running at different rates. Obviously, only one task at a time can actually execute on the MCU. Wi-Fi Body Scale with Arduino. #include <LiquidCrystal.h> #include <EEPROM.h> #include <WiServer.h> const int PinVPeso = A1; const int PinPulsanteP1 = A3; 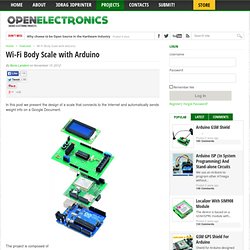 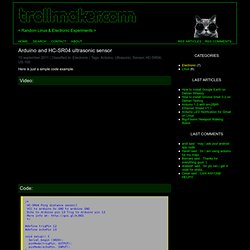 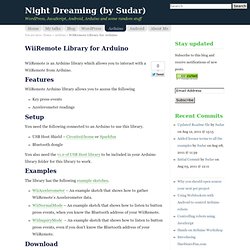 Features. Freaklabs - Open Source Wireless - Tutorials. In the first part of the walkthrough, we learned some basic operations and hello world type programs to get the 900 LR board up and running. 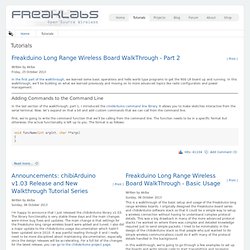 In this walkthrough, we’ll be building on what we learned previously and moving on to more advanced topics like radio configuration and power management. Adding Commands to the Command Line In the last section of the walkthrough, part 1, I introduced the cmdArduino command line library. It allows you to make sketches interactive from the serial terminal. Now, let’s expand on that a bit and add custom commands that we can call from the command line. First, we’re going to write the command function that we’ll be calling from the command line. Practical Arduino PDF. The ADC of the AVR « maxEmbedded. Most real world data is analog. 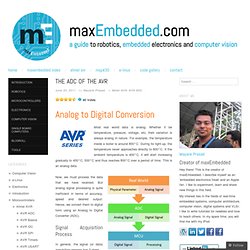 Whether it be temperature, pressure, voltage, etc, their variation is always analog in nature. For example, the temperature inside a boiler is around 800°C. During its light-up, the temperature never approaches directly to 800°C. If the ambient temperature is 400°C, it will start increasing gradually to 450°C, 500°C and thus reaches 800°C over a period of time. This is an analog data. How to optimize your Arduino memory usage « Liudr's Blog. If you are unfortunately hitting the memory limit on your arduino, let me first take the moment to congratulate you! 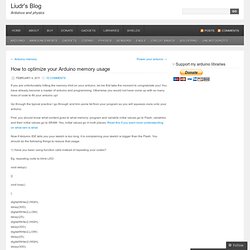 You have already become a master of arduino and programming. Otherwise you would not have come up with so many lines of code to fill your arduino up! Go through the typical practice I go through and trim some fat from your program so you will squeeze more onto your arduino. First, you should know what content goes to what memory: program and variable initial values go to Flash, variables and their initial values go to SRAM. Guide (in France) The World Famous Index of Arduino & Freeduino Knowledge.