Internet handover is go-go-go! ICANN to take IANA from US govt. The most significant change in the internet's functioning for a generation happened on 30 September at midnight. 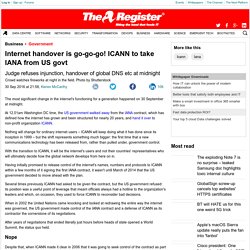 At 12.01am Washington DC time, the US government walked away from the IANA contract, which has defined how the internet has grown and been structured for nearly 20 years, and hand it over to non-profit organization ICANN. Nothing will change for ordinary internet users – ICANN will keep doing what it has done since its inception in 1999 – but the shift represents something much bigger: the first time that a new communications technology has been released from, rather than pulled under, government control. How the West lost faith in globalism. Sign Up for Our free email newsletters Is globalism dying? 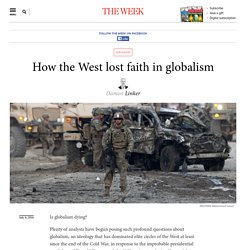 Plenty of analysts have begun posing such profound questions about globalism, an ideology that has dominated elite circles of the West at least since the end of the Cold War, in response to the improbable presidential candidacy of Donald Trump and the U.K. voting to take itself out of the European Union. Is rising popular opposition to free markets and open borders a sign of a broader rejection of neoliberal economic policies, or of free-market capitalism in general, or even of "liberal politics" itself?

Facebook posts becoming less personal as site looks to encourage people to post about their lives. 1/26 ‘The Drone-ovic’ In time for Wimbledon, Virgin Active is trialling ‘The Drone-ovic’ – a drone that drops tennis balls from above to achieve that perfect serve at its Northwood club tennis courts CPG Photography Ltd 2/26 Voice assistants are coming for your home A year from now, Google, Amazon and Apple might be listening in on your living room. 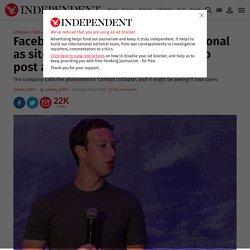 And you’ll be glad of it. All three of those companies are working on or have announced voice assistants that sit in people’s houses and talk to them. The boxes – which function as speakers, and look like them too – are meant do everything from asking questions to operating various parts of peoples’ houses Google 3/26 North Korean Facebook set up and immediately hacked An imitation of Facebook apparently set up for North Koreans has already been hacked and sent offline, just days after it was discovered. The Manufactured Invention of the Beatles, Stones, Grateful Dead and the Birth of Rock n’ Roll by the Tavistock Institute; A Jesuit Corporation. Kalergi Plan for the extinction of the white race with a world wide Jewish Zionist government. <Kalergi Translation by Michael Palomino; from: Kalergi was an Austrian Japanese mestizo. 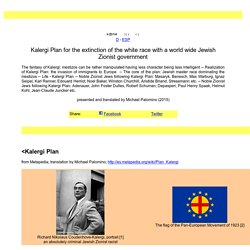 Richard Nikolaus Eijiro Count Coudenhove-Kalergi (Japanese: リヒャルト・ニコラウス・栄次郎・クーデンホーフ=カレルギー Rihiyăruto-Nikorausu 栄次郎 (= Eijiro) Kūdenhōfu-Karerugī), (Tokio, born on November 16, 1894 - dead on July 27, 1972, in Schruns, Vorarlberg, Austria) was an Austrian Japanese politician and activist of geopolitics. In 1923 he published his manifesto "Pan Europe" which states that an International Pan-European Union was founded. With this manifesto the Pan-European Movement was started, the precursor of Europe of Maastricht and of the European union.

Breitbart/Gravis Immigration Poll: 6 to 1, Americans Want Less. New polling data shows that it would be virtually impossible for Hillary Clinton to win the general election if the Republican nominee were able to frame the immigration issue in populist terms that emphasize reducing the overall amount of immigration into the country and protecting jobs, incomes, and benefits for the domestic population. 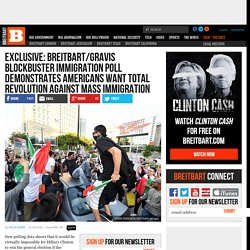 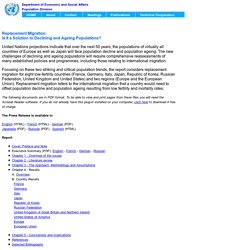 United Nations projections indicate that over the next 50 years, the populations of virtually all countries of Europe as well as Japan will face population decline and population ageing. The new challenges of declining and ageing populations will require comprehensive reassessments of many established policies and programmes, including those relating to international migration. Focusing on these two striking and critical population trends, the report considers replacement migration for eight low-fertility countries (France, Germany, Italy, Japan, Republic of Korea, Russian Federation, United Kingdom and United States) and two regions (Europe and the European Union). Replacement migration refers to the international migration that a country would need to offset population decline and population ageing resulting from low fertility and mortality rates. 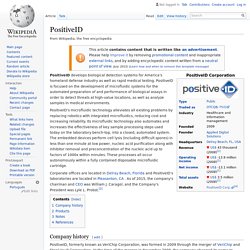 PositiveID is focused on the development of microfluidic systems for the automated preparation of and performance of biological assays in order to detect threats at high-value locations, as well as analyze samples in medical environments. PositiveID’s microfluidic technology alleviates all existing problems by replacing robotics with integrated microfluidics, reducing cost and increasing reliability. Its microfluidic technology also automates and increases the effectiveness of key sample processing steps used today on the laboratory bench-top, into a closed, automated system. The embedded devices perform cell lysis (including difficult spores) in less than one minute at low power, nucleic acid purification along with inhibitor removal and preconcentration of the nucleic acid up to factors of 1000x within minutes. Company history[edit] Products[edit] Notes[edit]