Off-duty officer kills man who stabbed 8 at mall in St. Cloud. Read the latest update to this story. 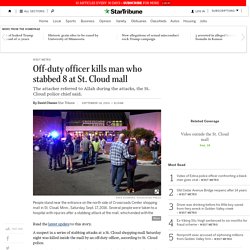 A suspect in a series of stabbing attacks at a St. Cloud shopping mall Saturday night was killed inside the mall by an off-duty officer, according to St. Cloud police. In a media briefing after midnight Sunday, St. Cloud police chief William Blair Anderson said an off-duty officer from another jurisdiction confronted and killed the suspect. Anderson declined to call the stabbing a terrorist attack, saying the motive for the attacks isn't known yet. Leaked FBI Data Reveal 7,700 Terrorist Encounters in USA in One Year; Border States Most Targeted.

Some of the documents pertain to the entire U.S., while others focus specifically on the state of Arizona. 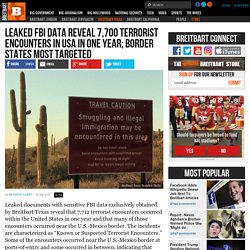 The documents are labeled, “UNCLASSIFIED/LAW ENFORCEMENT SENSITIVE” and contain data from the FBI-administered Terrorist Screening Center, the organization maintaining the Terrorist Screening Database, also known as the “Terror Watch List.” The leaked FBI data are contained in a fusion center’s educational materials, specifically the Arizona Counter Terrorism Information Center’s (ACTIC) “Known or Suspected Terrorist (KST) Encounters Briefing” covering from July 20 2015 through July 20 2016. The leaked documents are composed of 10 individual pages, but Breitbart Texas chose to release only nine of them due to page 10 containing contact information for ACTIC. Page Two of the documents contains a map of the entire U.S. with the numbers of encounters per state. The states with the highest encounters are all border states. 5 Afghan refugees detained in Austria following sexual assaults. Police in northern Austria have detained five migrants from Afghanistan over accusations of sexually harassing women during a wine festival in the city of Wels. 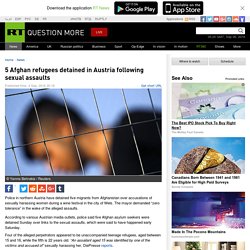 The mayor demanded “zero tolerance” in the wake of the alleged assaults. According to various Austrian media outlets, police said five Afghan asylum seekers were detained Sunday over links to the sexual assaults, which were said to have happened early Saturday. Report: 'British Muslim Male 170 Times More Likely to Be Part of a Sex Grooming Gang Than a Non-Muslim' Our diversity is our strength. 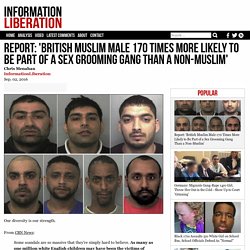 From CBN News: Some scandals are so massive that they're simply hard to believe. As many as one million white English children may have been the victims of Muslim rape gangs, better known as grooming gangs, in towns up and down Great Britain. Al-Qaeda founder launches fierce attack on Osama bin Laden. He is equally unsparing about Muslims who move to the West and then take up terrorism. 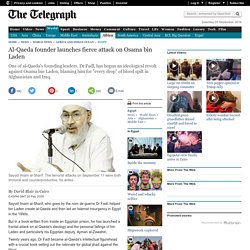 "If they gave you permission to enter their homes and live with them, and if they gave you security for yourself and your money, and if they gave you the opportunity to work or study, or they granted you political asylum," writes Dr Fadl, then it is "not honourable" to "betray them, through killing and destruction". In particular, Dr Fadl focuses his attack on Zawahiri, a key figure in al-Qaeda's core leadership and a fellow Egyptian whom he has known for 40 years. Zawahiri is a "liar" who was paid by Sudan's intelligence service to organise terrorist attacks in Egypt in the 1990s, he writes. The criticisms have emerged from Dr Fadl's cell in Tora prison in southern Cairo, where a sand-coloured perimeter wall is lined with watchtowers, each holding a sentry wielding a Kalashnikov assault rifle. Greece Calls On EU For Help With Huge Migrant Population. The Greek migration minister has called out to the European Union (EU) to help his country handle the tens of thousands of migrants stranded in Greece, claiming the country cannot handle them all alone. 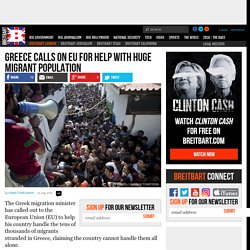 Greek Migration Minister Ioannis Mouzalas made it clear his government cannot handle the sheltering and feeding of an estimated 58,000 migrants by themselves and are appealing for the EU to help. Mr. Mouzalas said that Greece was ready to send 7,000 migrants to other EU states in order to relieve some of the pressure on the Greek government that is still racked with austerity measures and high unemployment. While the EU states are legally bound to help, the minister has claimed so far none have answered his calls, reports Zeit Online. Germany's "Rapefugee" Crisis. “Why should we children have to grow up in such fear?” 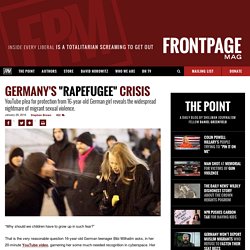 That is the very reasonable question 16-year-old German teenager Bibi Wilhailm asks, in her 20-minute YouTube video, garnering her some much-needed recognition in cyberspace. Her video had first appeared on Facebook, but was taken down for reasons that still remain unclear. German riot police break up huge brawl between ‘hundreds’ of Muslims. Riot police were called in to break-up a mass brawl involving ‘hundreds’ of asylum-seekers in Germany, in a dispute over alcohol. 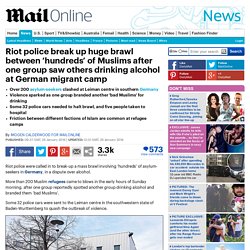 More than 200 Muslim refugees came to blows in the early hours of Sunday morning, after one group reportedly spotted another group drinking alcohol and branded them ‘bad Muslims’. German asylum centers: Muslim migrants tear up Bibles, assault Christians, sexually abuse women and children, beat up gays. Racist Violence in Germany Again Tests Merkel’s Openness To Refugees. Künzelsau: Frau in eigener Wohnung vergewaltigt. U.S. accepts more Syrian refugees than all of EU: 8,000 vs. 6,000. French citizens urged to let desperate refugees into their homes. There are currently 147 reception centres across France, but these are in massive demand as desperate refugees continue to flee the Middle East. 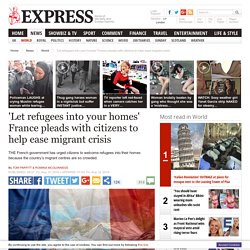 Fears of a 'Calais in Italy' as migrants keep flooding across the Mediterranean  Investigative Report Homegrown Terrorism Military. Etriean refugee 'rapes pensioner' in Iddenbueren, Germany, when visting her sister grave. The man, originally from Eritrea, was charged with rape and placed into custody while police investigate the case. 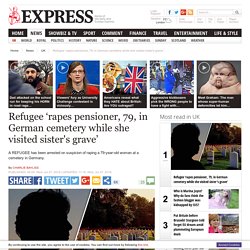 A witness heard the woman crying out for help and called the police. Islam: The Politically Incorrect Truth. Real or imagined: Racism 'fear' over Rotherham child abuse. A "taboo" subject, "ignoring a politically inconvenient truth", threatening "community cohesion", "fear of being thought racist".

The report which revealed the abuse of more than 1,400 children in Rotherham - mainly by men of Pakistani heritage - found many reasons why the shocking scale of child sexual exploitation in the South Yorkshire town remained hidden. A God to Damn Us. The former Army Ranger known as Peter Kassig met his end under the knives of the Islamic State as Abdul Rahman Kassig. Germany: Migrant Rape Crisis Worsens. A mob of asylum seekers from Afghanistan assaulted three teenage girls at a shopping center in the northern German city of Kiel. The attack — which occurred over two-hours on the evening of February 25, and mirrored the mass assaults of German women in Cologne on New Year's Eve — shows, once again, that public spaces in Germany are becoming increasingly perilous for women and children.

Police reports show that sexual violence in Germany has skyrocketed since Chancellor Angela Merkel allowed more than one million mostly male migrants from Africa, Asia and the Middle East into the country. But the crimes are being played down by German authorities, apparently to avoid fueling anti-immigration sentiments. Police in Kiel say the assault began at around 5:30 pm, when two Afghan males (aged 19 and 26) began stalking and photographing three girls (aged 15, 16 and 17) at a food court in the Sophienhof, a large shopping center near the city's central train station. Norwegian 3-year-old raped at Forus asylum centre in Stavanger. A three-year-old refugee has allegedly been raped at an asylum centre in Norway's Stavanger, the country's third largest city.

In Denmark, lawmakers are pushing to have such sex education included in mandatory language classes for refugees. The German region of Bavaria, the main entry point to Germany for asylum seekers, is already experimenting with such classes at a shelter for teenage migrants in the town of Passau. Sweden: Rape Capital of the West. Sparks Fly In German Press As Treatment Of Muslims Hits "Gunpoint" Canada: School “Refugee” Violence - Cologne Police Requested Reinforcements On New Year's Eve But Were Denied By Politician Who Later Criticised Them For Performance. Racism and prejudice.

Erdogan Dreaming to 'Revive New Ottoman Caliphate'… in Europe. Politics Get short URL All German Chancellor Angela Merkel got for enlisting Turkish President Erdogan's help in coping with the European refugee crisis is a dramatic drop in poll numbers, renowned international expert, author and journalist Deena Stryker writes in her article for New Eastern Outlook entitled "Was a United Europe a Mirage?