How to Fix Issue Booting to DVD/CD with New UEFI BIOS Boot Order. Creating bootable USB drive for UEFI computers - Ask the Core Team. In today’s blog I am going to discuss how to handle booting from a USB drive on a UEFI system so you can deploy Windows. 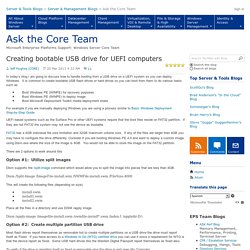 It is common to create bootable USB flash drives or hard drives so you can boot from them to do various tasks such as Boot Windows PE (WINPE) for recovery purposes Boot Windows PE (WINPE) to deploy image Boot Microsoft Deployment Toolkit media deployment share For example if you are manually deploying Windows you are using a process similar to Basic Windows Deployment Step-by-Step Guide UEFI based systems such as the Surface Pro or other UEFI systems require that the boot files reside on FAT32 partition. If they are not FAT32 the system may not see the device as bootable. FAT32 has a 4GB individual file size limitation and 32GB maximum volume size. There are 2 options to work around this Option #1: Utilize split images Dism supports the /split-image command which would allow you to split the image into pieces that are less than 4GB. 1. 2. 3. 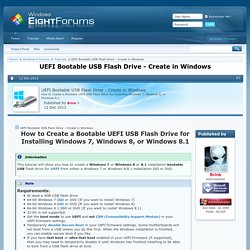 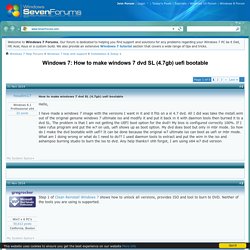 I only mentioned rufus because I have to use that as an alternative to run w7 off a usb drive so I can install it in uefi mode. Anyway, I serviced this w7 image just like everyone else does through dism command and imagex. First, I have original, genuine, untouched, w7 ultimate iso. mount that with dt (daemon tools) extract the install.wim leaving the original disc unharmed. service wim with imagex and remove all versions of 7 except: home premium, pro, and ultimate (done for x64 only no x32). Then save the wim with my now custom image with home premium, pro, and ult (only x64). Then mount the original w7 ult iso with dt and replace my custom wim with the one already on the disc. Creating Windows UEFI Boot-Stick in Windows - Thomas-Krenn-Wiki.

In this article you will find information about how you can create a UEFI-Windows-Boot-Stick in Windows. 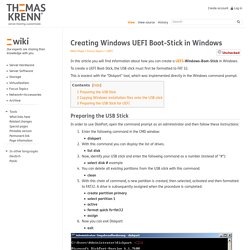 To create a UEFI Boot-Stick, the USB stick must first be formatted to FAT 32. This is easiest with the "Diskpart" tool, which was implemented directly in the Windows command prompt. Preparing the USB Stick In order to use DiskPart, open the command prompt as an administrator and then follow these instructions: Enter the following command in the CMD window: diskpart With this command you can display the list of drives. Copying Windows installation files onto the USB stick Next, Windows installation files need to be copied to the USB stick. Here is an example of how you can copy the files via Windows Command Prompt from the mounted ISO file or from the inserted Windows DVD to the USB stick: Create Windows PE or Linux Bootable Disc/USB/ISO. Introduction of Bootable CD Bootable CD is a kind of special disc, which contains a bootable operating system. 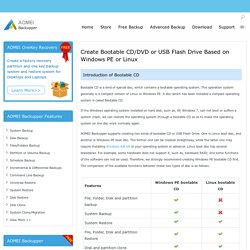 UEFI. The Extensible Firmware Interface (EFI) or its version 2.x variant, Unified EFI (UEFI) is a firmware type that is widespread on recent computers, especially those more recent than 2010. 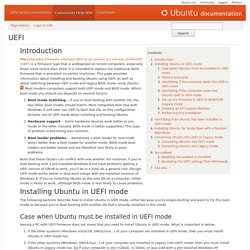 It is intended to replace the traditional BIOS firmware that is prevalent on earlier machines. [SOLVED]Cannot boot Debian 8 live DVD in UEFI mode. I have a new laptop DELL Inspiron 15 3543 (3000 Series)5th Generation Intel Core i5-5200U ProcessorIt comes installed with Windows 8.1 (UEFI mode) I tried to dual boot Windows with Debian but I can't boot the Debian live DVD in UEFI mode. 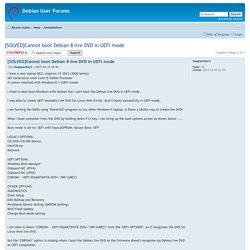 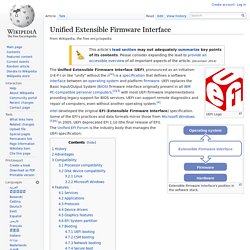 Intel developed the original EFI (Extensible Firmware Interface) specification. Some of the EFI's practices and data formats mirror those from Microsoft Windows.[5][6] In 2005, UEFI deprecated EFI 1.10 (the final release of EFI). The Unified EFI Forum is the industry body that manages the UEFI specification. History[edit] The original motivation for EFI came during early development of the first Intel–HP Itanium systems in the mid-1990s. In July 2005, Intel ceased its development of the EFI specification at version 1.10, and contributed it to the Unified EFI Forum, which has evolved the specification as the Unified Extensible Firmware Interface (UEFI). Version 2.1 of the UEFI (Unified Extensible Firmware Interface) specification was released on 7 January 2007. Advantages[edit] Interaction between the EFI boot manager and EFI drivers Compatibility[edit] Processor compatibility[edit] Disk device compatibility[edit]

Unified Extensible Firmware Interface Forum. The Test Tools identified below are available for downloading and to read only. 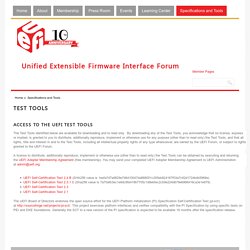 By downloading any of the Test Tools, you acknowledge that no license, express or implied, is granted to you to distribute, additionally reproduce, implement or otherwise use for any purpose (other than to read only) the Test Tools, and that all rights, title and interest in and to the Test Tools, including all intellectual property rights of any type whatsoever, are owned by the UEFI Forum, or subject to rights granted to the UEFI Forum. UEFI boot: how does that actually work, then? It’s AdamW Essay Time again! 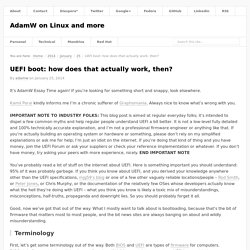 If you’re looking for something short and snappy, look elsewhere. Kamil Paral kindly informs me I’m a chronic sufferer of Graphomania. Always nice to know what’s wrong with you. IMPORTANT NOTE TO INDUSTRY FOLKS: This blog post is aimed at regular everyday folks; it’s intended to dispel a few common myths and help regular people understand UEFI a bit better. UEFI BIOS explained. If you’re buying a new PC, you'll see systems described as boasting a UEFI BIOS. If you’re building a computer from scratch you may notice that some motherboards feature a UEFI BIOS, while older models lack it. But what does UEFI mean, and is it worth paying extra for it?

Why BIOS needs replacing Anyone who has used a PC will be at least vaguely familiar with the BIOS – the Basic Input/Output System that’s stored in your PC’s firmware, and which kicks in as soon as you turn on your PC. Before the operating system loads, it’s the BIOS that handles the fundamental business of enumerating which hardware is installed, and applying basic settings such as CPU frequencies and RAM timings.

Broadly speaking, the role of the PC BIOS hasn’t changed in more than 20 years, and for most of that time it’s done a satisfactory job. The BIOS was never designed to be extended ad infinitum in this way. Welcome to Unified Extensible Firmware Interface Forum.