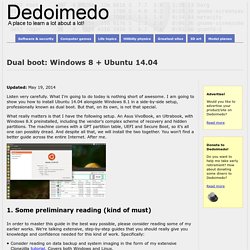 What I'm going to do today is nothing short of awesome. I am going to show you how to install Ubuntu 14.04 alongside Windows 8.1 in a side-by-side setup, professionally known as dual boot. But that, on its own, is not that special. What really matters is that I have the following setup. 1. In order to master this guide in the best way possible, please consider reading some of my earlier works. Consider reading on data backup and system imaging in the form of my extensive Clonezilla tutorial. UEFI Installing - Tips. Boot and Install Windows 7 from USB 3.0 solution.

Modern motherboards have a number of USB 3.0 ports, although Windows 7 installation does not contain USB 3.0 and brings up an error when booting with a USB stick(flash drive) from a USB 3.0 port. 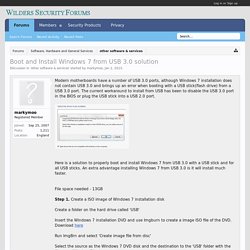 The current workaround to install from USB has been to disable the USB 3.0 port in the BIOS or plug the USB stick into a USB 2.0 port. G752VT clean install - some issues found and questions. HI, i've received a brand new G752VT-T7005T a couple of days ago. 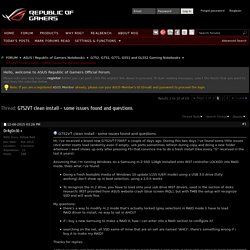 During this two days i've found some little issues (dvd writer starts load randomly even if empty, usb ports sometimes refresh during copy and doing a new folder wherever i want shows up only after pressing F5) that convince me to do a fresh install (like every "G" received in the last 6 years);Assuming that i'm running Windows on a Samsung m.2 SSD 128gb installed onto IRST controller LOCKED into RAID mode, thats what i've found:Doing a fresh bootable media of Windows 10 update 1155 (UEFI mode) using a USB 3.0 drive (fully working) don't show up in boot selection, using a 2.0 it works.To recognize the m.2 drive, you have to load onto your usb drive IRST drivers, used in the section of disks research; IRST provided from ASUS website crash (blue screen IRQL), but with THIS the setup will recognize SSD and will work fine.

Guide: How to install windows 8/8.1/10 The proper way (UEFI based installation) - Page 7. Originally Posted by ClintlgmYes all new computer are using UEFI GPT, BIOS MBR is called legacy and hasn't been used for several years now. 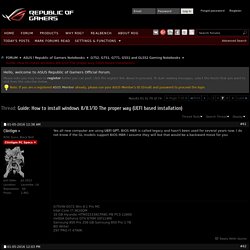 I do not know if the GL models support BIOS MBR I assume they will but that would be a backward move for youi'm sure that there is are some portable pcs sticks for TV and tables that runs based on 8086 (= x86) instruction set using BIOS - even though "brand new" today. With asus ROG laptops, it is likely that you got their Aptio based BIOS, thus you should have a "CSM" option in the bios ( enabled=legacy BIOS mode | disabled = UEFI mode ). Also, another indicator for your laptop support of UEFI is the CHIPSET ( on rog it is usually Intel's ) model. One can check @intel's website for the chipset features to see whether it supports UEFI.Nontheless, even if your ROG laptop is publish by ASUS THEMSELF as being UEFI supported - your laptop might NOT have a UEFI suppoted pre-installed windows 8/10 !!!... 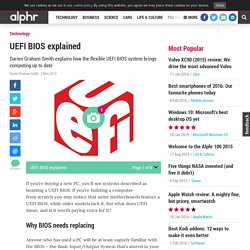 If you’re building a computer from scratch you may notice that some motherboards feature a UEFI BIOS, while older models lack it. But what does UEFI mean, and is it worth paying extra for it? Why BIOS needs replacing Anyone who has used a PC will be at least vaguely familiar with the BIOS – the Basic Input/Output System that’s stored in your PC’s firmware, and which kicks in as soon as you turn on your PC. Before the operating system loads, it’s the BIOS that handles the fundamental business of enumerating which hardware is installed, and applying basic settings such as CPU frequencies and RAM timings. Broadly speaking, the role of the PC BIOS hasn’t changed in more than 20 years, and for most of that time it’s done a satisfactory job. The BIOS was never designed to be extended ad infinitum in this way.