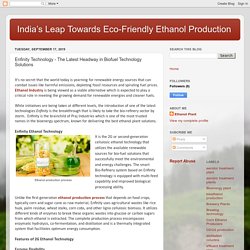 Ethanol Industry is being viewed as a viable alternative which is expected to play a critical role in meeting the growing demand for renewable energies and cleaner fuels. Enfinity Technology - The Latest Headway in Biofuel Technology Solutions by Praj Industries. ADVANCEMENTS IN CELLULOSIC ETHANOL PRODUCTION & INTEGRATION OF BIOGAS: karankumar01. The advent of cellulosic ethanol production online has prompted the co-location of anaerobic digesters at the plants to recover biogas from soluble residues, naturally encountered in the ethanol production process. 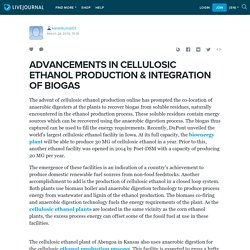 These soluble residues contain energy sources which can be recovered using the anaerobic digestion process. The biogas thus captured can be used to fill the energy requirements. Recently, DuPont unveiled the world’s largest cellulosic ethanol facility in Iowa. At its full capacity, the bioenergy plant will be able to produce 30 MG of cellulosic ethanol in a year. Prior to this, another ethanol facility was opened in 2014 by Poet-DSM with a capacity of producing 20 MG per year. India’s Leap Towards Eco-Friendly Ethanol Production: karankumar01. India has taken a big developmental step recently that is certain to change the future of its fuel generation and consumption patterns. 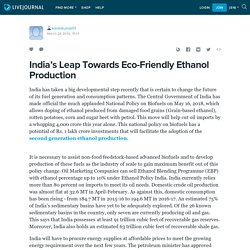 The Central Government of India has made official the much applauded National Policy on Biofuels on May 16, 2018, which allows doping of ethanol produced from damaged food grains (Grain-based ethanol), rotten potatoes, corn and sugar beet with petrol. This move will help cut oil imports by a whopping 4,000 crore this year alone. This national policy on biofuels has a potential of Rs. 1 lakh crore investments that will facilitate the adoption of the second generation ethanol production.

Working of an Industrial Effluent Treatment Plant. Effluents refer to the liquid waste or sewage generated majorly from the industries. 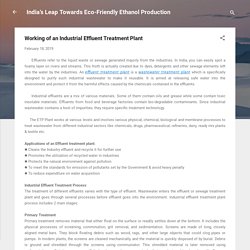 In India, you can easily spot a foamy layer on rivers and streams. This froth is actually created due to dyes, detergents and other sewage elements left into the water by the industries. DDGS: A Nutritious Yet Inexpensive Addition to Poultry Feed. The rising cost and declining supply of conventional grains have made way for researching newer methods of poultry food production which are cheaper but have better nutritional value. 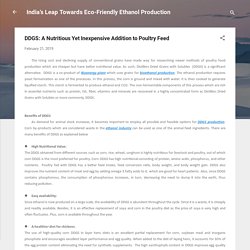 As such, Distillers Dried Grains with Solubles (DDGS) is a significant alternative. DDGS is a co-product of Bioenergy plant which uses grains for bioethanol production. The ethanol production requires yeast fermentation as one of the processes. In this process, the corn is ground and mixed with water. It is then cooked to generate liquified starch. Benefits of DDGS As demand for animal stock increases, it becomes important to employ all possible and feasible options for DDGS production. L High Nutritional Value: Working of an Industrial Effluent Treatment Plant. Effluents refer to the liquid waste or sewage generated majorly from the industries. 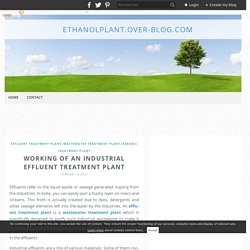 In India, you can easily spot a foamy layer on rivers and streams. This froth is actually created due to dyes, detergents and other sewage elements left into the water by the industries. An effluent treatment plant is a wastewater treatment plant which is specifically designed to purify such industrial wastewater to make it reusable. It is aimed at releasing safe water into the environment and protect it from the harmful effects caused by the chemicals contained in the effluents. Industrial effluents are a mix of various materials. The ETP Plant works at various levels and involves various physical, chemical, biological and membrane processes to treat wastewater from different industrial sectors like chemicals, drugs, pharmaceutical, refineries, dairy, ready mix plants & textile etc. Wastewater Treatment Using Evaporation. Multiple effect evaporator efficiently uses the heat from steam to evaporate water to concentrate dissolved salts in the water. 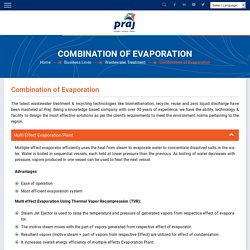 Water is boiled in sequential vessels, each held at lower pressure than the previous. As boiling of water decreases with pressure, vapors produced in one vessel can be used to heat the next vessel. Advantages Ease of operationMost efficient evaporation system Multi effect Evaporation Using Thermal Vapor Recompression (TVR): Brewery Plants & Technology. Ethanol Production Plant - Fuel Ethanol Manufacturers. Praj Industrial Water Treatment Systems. Sustainability of the world through circular economy has always been the driving force for Praj to offer complete End-to End Water and Wastewater Treatment Solutions to our customers. 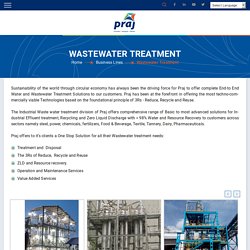 Praj has been at the forefront in offering the most techno-commercially viable Technologies based on the foundational principle of 3Rs - Reduce, Recycle and Reuse. The Industrial Waste water treatment division of Praj offers comprehensive range of Basic to most advanced solutions for Industrial Effluent treatment, Recycling and Zero Liquid Discharge with > 98% Water and Resource Recovery to customers across sectors namely steel, power, chemicals, fertilizers, Food & Beverage, Textile, Tannery, Dairy, Pharmaceuticals.

Praj offers to it’s clients a One Stop Solution for all their Wastewater treatment needs: Treatment and DisposalThe 3Rs of Reduce, Recycle and ReuseZLD and Resource recovery.Operation and Maintenance ServicesValue Added Services. Ethanol From Molasses - Praj Industries. Bio Energy Praj is a name to reckon with in the global biofuel technology solutions. 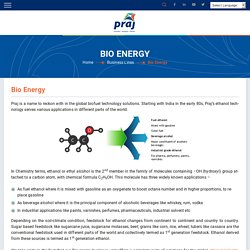 Starting with India in the early 80s, Praj’s serves various applications in different parts of the world. In Chemistry terms, ethanol or ethyl alcohol is the 2nd member in the family of molecules containing –OH (hydroxyl) group attached to a carbon atom, with chemical formula C2H5OH. This molecule has three widely known applications – As fuel ethanol where it is mixed with gasoline as an oxygenate to boost octane number and in higher proportions, to replace gasolineAs beverage alcohol where it is the principal component of alcoholic beverages like whiskey, rum, vodkaIn industrial applications like paints, varnishes, perfumes, pharmaceuticals, industrial solvent etc Depending on the soil-climate condition, feedstock for ethanol changes from continent to continent and country to country.