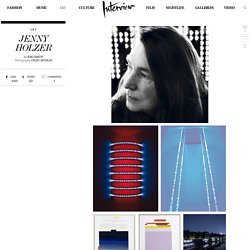 He had to flee the National Socialists. He set up shop in New York. He went from cafés in Munich to cafés in New York, and tried to live as well as he could. I put his own text back in Munich, in the café of the literature house there. SMITH: That's where I am, in Munich, right now. HOLZER: We put his words on pie plates and the bottoms of coffee cups, because he was a man who liked to eat and drink and write and talk. SMITH: Do you like working internationally, as in outside the United States? HOLZER: I went to Europe early. SMITH: That was the case with many artists of our generation, and many more before us. HOLZER: Because I started making memorials and public projects in Europe relatively early, that confirmed the impulse to develop certain kinds of subject matter. SMITH: What's the difference between making work, like commissioned work, and making work from the studio by your own impetus? HOLZER: Yes. Tracey Emin on Getting Older With Her Art. “I’m really interested in making work that’s political but also joyful.” — Visual AIDS. 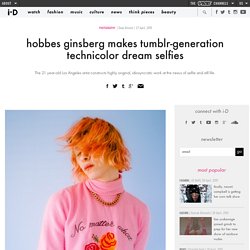 Outside there are thousands of smoked cigarettes, inside there are mattresses on the floor, the power appears to be off, and a cat is wandering around. It's a West Coast, millennial version of the Parisian artist's garret. Ginsberg was brought up just outside of Dallas, Texas, but went to middle school and high school in Nicaragua (she identifies as a queer girl, and wishes to be referred to as "she" or "they"). They are a pretty much self-taught artist who photographs painstakingly constructed still lives and selfies. They see the taking of selfies as a sort of strange alchemy, a way of transforming the inner psyche.

Recently there has been a lot of interest in feminist collectives and activism, as well as trans and queer communities online. Which artists inspire you apart from your peers? What message are you trying to share with the world? SEEING I. EL ANATSUI. Iris Haeussler - The Legacy of Joseph Wagenbach. Vdrome. Biennale Arte 2015 - Lili Reynaud-Dewar. Lili Reynaud Dewar : entretien. 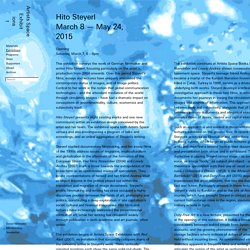 Over this period Steyerl’s films, essays and lectures have uniquely articulated the contemporary status of images, and of image politics. Central to her work is the notion that global communication technologies – and the attendant mediation of the world through circulating images – have had a dramatic impact on conceptions of governmentality, culture, economics and subjectivity itself. Hito Steyerl presents eight existing works and one new commission within an exhibition design conceived by the artist and her team.

Steyerl studied documentary filmmaking, and her essay films of the 1990s address issues of migration, multiculturalism and globalization in the aftermath of the formation of the European Union. Empire of the Senses.

Fabric. Lauren Clay. An amazing series of sculptures by Brooklyn-based artist Lauren Clay who recently obtained her MFA in Painting and Printmaking at Virginia Commonwealth University. 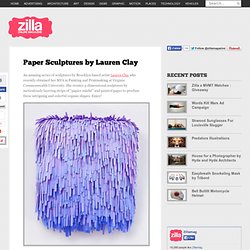 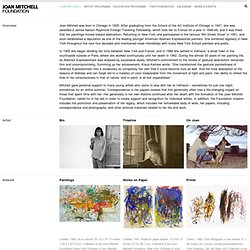 After graduating from the School of the Art Institute of Chicago in 1947, she was awarded a James Nelson Raymond Foreign Traveling Fellowship, which took her to France for a year in 1948-49, and it was there that her paintings moved toward abstraction. Returning to New York, she participated in the famous “9th Street Show” in 1951, and soon established a reputation as one of the leading younger American Abstract Expressionist painters. She exhibited regularly in New York throughout the next four decades and maintained close friendships with many New York School painters and poets. In 1955 she began dividing her time between New York and France, and in 1968 she settled in Vétheuil, a small town in the countryside outside of Paris, where she worked continuously until her death in 1992.

Mitchell gave personal support to many young artists who came to stay with her at Vétheuil— sometimes for just one night; sometimes for an entire summer. King Street Gallery.