Forehand Swings. HighTechPanda sur Twitter : "Slow motion video of a 142mph tennis serve shows the ball turning to goo... What It’s Like to Face a 150 M.P.H. Tennis Serve. World's Most Amazing Tennis Trick Shots. Jordan Sweeney - Forehand. Wall Street Journal on Twitter: How much top athletes are paid in tennis and other sports: #USOpen... How Much Does the 32nd Player Make in Tennis and Other Sports? From Baseball to Bowling: How Players Compare Several sports, including those shown above, are broken down below, showing how the highest-paid player compares with the 32nd highest-paid player in sports ranging from hockey to bull riding. 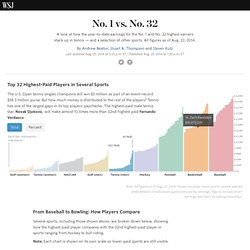 Note: Each chart is shown on its own scale so lower-paid sports are still visible. Tennis (men) Association of Tennis Professionals Novak Djokovic, the No. 1-ranked tennis player in the world, has made more than $7 million this year, including more than $2.9 million for winning Wimbledon. Meanwhile, Fernando Verdasco, the No. 32 earner on the ATP Tour, has made $757,446 with one ATP tournament victory—his first since 2010. Tennis (women) Women's Tennis Association Maria Sharapova has won three tournaments this year, including the French Open, and leads the WTA with $4,011,860 in prize money. Baseball Major League Baseball Basketball National Basketball Association Football National Football League Hockey National Hockey League Soccer Major League Soccer. Sports Sunglasses. By Gary Heiting, OD; reviewed by Donald S. 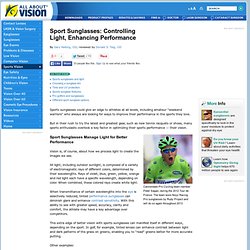 Teig, OD Sports sunglasses could give an edge to athletes at all levels, including amateur "weekend warriors" who always are looking for ways to improve their performance in the sports they love. But in their rush to try the latest and greatest gear, such as new tennis racquets or shoes, many sports enthusiasts overlook a key factor in optimizing their sports performance — their vision. Cannondale Pro Cycling team member Peter Sagan, during the 2012 Tour de France.

The team wore Noyz Racing Pro sunglasses by Rudy Project and will do so again throughout 2013. Sport Sunglasses Manage Light for Better Performance Vision is, of course, about how we process light to create the images we see. All light, including outdoor sunlight, is composed of a variety of electromagnetic rays of different colors, determined by their wavelengths. This extra edge of better vision with sports sunglasses can manifest itself in different ways, depending on the sport.

All About Vision - Complete Consumer Guide About Vision and Eye Care. Google Glass Roger Federer video: first-person film of tennis. Roger Federer Faces Rafael Nadal at Australian Open Friday. Ask any fan or pundit to refute the claim that Roger Federer is the greatest men’s tennis player of all time, and he will, without question, point to one thing before all others: Federer’s record against Rafael Nadal. 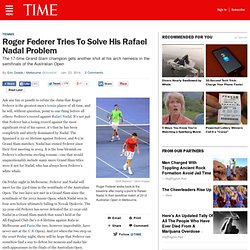 It’s not just that Federer has a losing record against the most significant rival of his career, it’s that he has been completely and utterly dominated by Nadal. The Spaniard is 22-10 lifetime against Federer, and 8-2 in Grand Slam matches. Nadal has owned Federer since their first meeting in 2004. It is the lone blemish on Federer’s otherwise sterling resume—one that would unquestionably include many more Grand Slam titles were it not for Nadal, who has always been Federer’s white whale. On Friday night in Melbourne, Federer and Nadal will meet for the 33rd time in the semifinals of the Australian Open. That hope comes from a reasonable place. Roger Federer Faces Rafael Nadal at Australian Open Friday. Rafael Nadal Wins French Open, Defeats David Ferrer For Historic 8th Title At Roland Garros. PARIS — If Rafael Nadal truly was going to be challenged, if his bid for an unprecedented eighth French Open championship would be slowed even a bit, this might have been the moment. 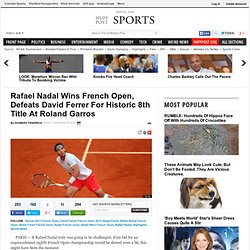 Leading by a set and a break 70 minutes into Sunday's final against David Ferrer, another generally indefatigable Spaniard, Nadal faced four break points in one game. The last was a 31-stroke exchange, the match's longest, capped when Nadal absorbed Ferrer's strong backhand approach and transformed it into a cross-court backhand passing shot. Ferrer glared at the ball as it flew past and landed in a corner, then smiled ruefully. What else was there to do? Save, Share, and Organize each Lesson and Classroom Activity with @TeamClaco by @Kleinerin. Claco is a free site for teachers to add their favorite content and find great resources to use. Claco is similar to Pinterest because you can view content on the main page. 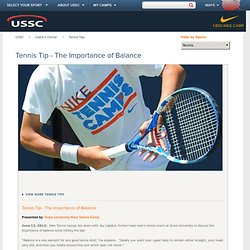 "Balance is a key element for any good tennis shot," he explains. "Ideally you want your upper body to remain rather straight, your head very still, and then you rotate around this axis which does not move. " With 18 years of head coaching experience at Duke University and a former All-American and US Davis Cup player himself, Lapidus has had time to observe players and notice where common mistakes occur. Prior to coaching at Duke, Lapidus was a three-time All-America selection and team captain at Princeton University, earned a berth on the United States Davis Cup Team in 1980 as well as the U.S. 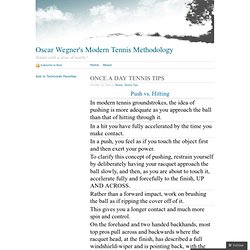 Hitting In modern tennis groundstrokes, the idea of pushing is more adequate as you approach the ball than that of hitting through it. In a hit you have fully accelerated by the time you make contact. The Second Tier of Improvement « Official Website of Oscar Wegner and Modern Tennis Methodology MTM. You already learned your strokes according to MTM (Modern Tennis Methodology). 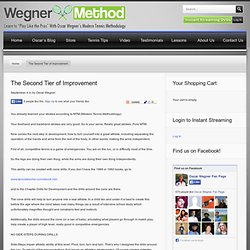 Your forehand and backhand strokes are very good. So is your serve. Really great strokes. Pure MTM. Now comes the next step in development: how to turn yourself into a great athlete, including separating the operation of the hands and arms from the rest of the body. First of all, competitive tennis is a game of emergencies. So the legs are doing their own thing, while the arms are doing their own thing independently. This ability can be created with cone drills. Www.tennisteacher.com/ebook.htm and to the Chapter Drills for Development and the drills around the cone are there. The cone drills will help to turn anyone into a real athlete. Additionally, the drills around the cone (or a can of balls), emulating what players go through in match play, help create a player of high level, really good in competitive emergencies. 1.bruce.lee.secrets.v5_QT. 1002.generating.short.power.v2_QT. Hand Use. No twisting. 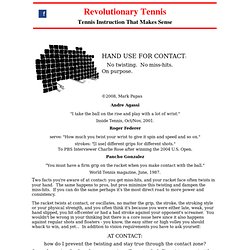 No miss-hits. On purpose. ©2008, Mark Papas Andre Agassi "I take the ball on the rise and play with a lot of wrist. "