1194984267600342220world_map_01. ESL 2. Some study that I used to know: What do you remember from high school? Author Note: This is the first YouTube video I've tried "flipping" into a TEDed lesson, as I work to learn how to make best use of the new TEDed platform for making videos into interactive lessons. 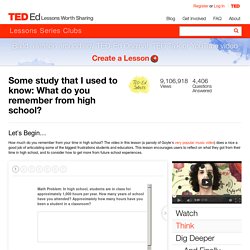 I'd welcome encouragement, feedback and questions from others trying it out. ~~~An idea for an extension project:Goyte's song, "Somebody I used to Know" has been covered and parodied by several other artists. For example, Walk of the Earth, created their one-cut video showing the 5 band members playing the whole song on one guitar. The Natural Teacher: 10 Ways You Can Add Vitamin "N" to the Classroom & Beyond. Not long ago I met some dedicated young women who were doing their student teaching at an impressive nature-based preschool. 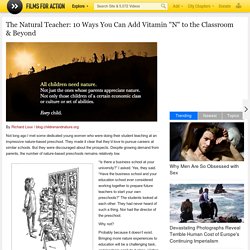 They made it clear that they’d love to pursue careers at similar schools. But they were discouraged about the prospects. Despite growing demand from parents, the number of nature-based preschools remains relatively low. “Is there a business school at your university?” Why Schools Need to Bring Back Shop Class. Sir Ken Robinson, Ph.D, is the author of Creative Schools, The Element, Finding Your Element and Out of Our Minds. 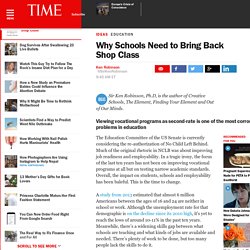 The Education Committee of the US Senate is currently considering the re-authorization of No Child Left Behind. Much of the original rhetoric in NCLB was about improving job readiness and employability. In a tragic irony, the focus of the last ten years has not been on improving vocational programs at all but on testing narrow academic standards. Overall, the impact on students, schools and employability has been baleful. This is the time to change. A study from 2013 estimated that almost 6 million Americans between the ages of 16 and 24 are neither in school or work. In practice, our communities — and economies — depend on an enormous diversity of talents, roles, and occupations.

As with many schools in the United States, the shop program at Analy High School in Sebastopol, California, had become largely irrelevant. Brain Scans Show The Real Impact Love Has On A Child’s Brain. By Editor You comfort them over a skinned knee in the playground, and coax them to sleep with a soothing lullaby. 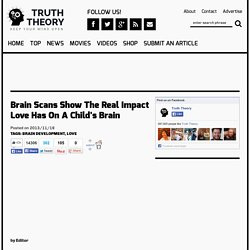 But being a nurturing mother is not just about emotional care – it pays dividends by determining the size of your child’s brain, scientists say. Shocking: According to neurologists the sizeable difference between these two brains has one primary cause – the way were treated by their mothers Both of these images are brain scans of a two three-year-old children, but the brain on the left is considerably larger, has fewer spots and less dark areas, compared to the one on the right.

According to neurologists this sizeable difference has one primary cause – the way each child was treated by their mothers. But the child with the shrunken brain was the victim of severe neglect and abuse. Babies’ brains grow and develop as they interact with their environment and learn how to function within it. This type of severe, global neglect can have devastating consequences. Lead author Joan L. 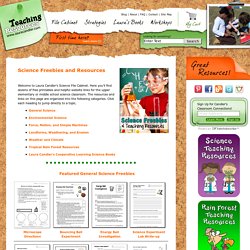 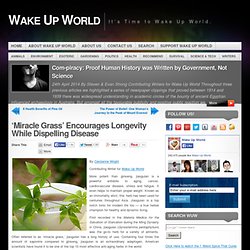 It even helps to maintain proper weight. Known as an immortality elixir, this herb has been used for centuries throughout Asia. Jiaogulan is a top notch tonic for modern life too — a true herbal champion for healthy and dynamic living. First recorded in the Materia Medica for the Salvation of Starvation during the Ming Dynasty in China, jiaogulan (Gynostemma pentaphyllum) was the go-to herb for a variety of ailments. What Inquiry is NOT. "Science class should make students think: Our students aren't being allowed to discover the joys of experimenting, and learning on their own. 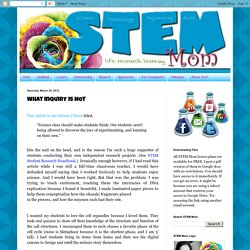 " hits the nail on the head, and is the reason I'm such a huge supporter of students conducting their own independent research projects. (See STEM Student Research Handbook.) Ironically enough however, if I had read this article while I was still a full-time classroom teacher, I would have defended myself saying that I worked tirelessly to help students enjoy science. The Challenges and Realities of Inquiry-Based Learning. Inquiry Learning Teaching Strategies Getty By Thom Markham Teachers in a rural southeast Michigan high school were recently discussing the odd behavior of the senior class. 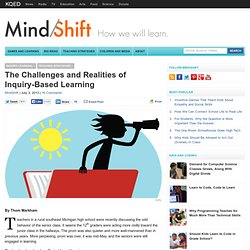 It seems the 12th graders were acting more civilly toward the junior class in the hallways. We’ll Go No More A-Roving by Lord Byron. BloomsCognitiveDomain.