Antoine Speaks...: Most People Won't Share this... because African Lives Don't matter! Most people won't read or share this; don't let this massacre of Students distract you from videos of cats and posts from ladbible... 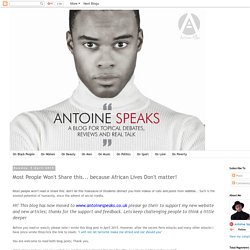 Such is the wasted potential of humanity, since the advent of social media. Hi! This blog has now moved to www.antoinespeaks.co.uk please go their to support my new website and new articles; thanks for the support and feedback. Lets keep challenging people to think a little deeperBefore you read or watch; please note I wrote this blog post in April 2015. However, after the recent Paris attacks and many other attacks I have since wrote this(click the link to read): "I will not let terrorist make me afraid and nor should you" You are welcome to read both blog posts; Thank you. German Revolution of 1918–19. The German Revolution or November Revolution (German: Novemberrevolution) was the politically driven civil conflict in the German Empire at the end of the First World War, which resulted in the replacement of Germany's imperial government with a republic. 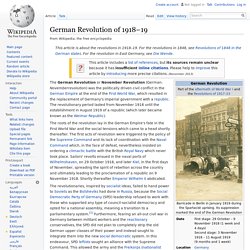 The revolutionary period lasted from November 1918 until the establishment in August 1919 of a republic (which later became known as the Weimar Republic). The roots of the revolution lay in the German Empire's fate in the First World War and the social tensions which came to a head shortly thereafter. The first acts of revolution were triggered by the policy of the Supreme Command and its lack of coordination with the Naval Command which, in the face of defeat, nevertheless insisted on ordering a climactic battle with the British Royal Navy which never took place. Elections for the new Weimar National Assembly were held on 19 January 1919. The revolution ended on 11 August 1919, when the Weimar Constitution was adopted. Momentum: Building the Labour Movement  Walking up Coldharbour lane in Brixton, South London on an autumnal Thursday morning I was preparing to meet a group of strangers who I was now loosely organised into a new 'Momentum' group with. 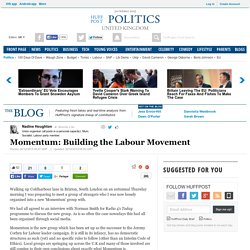 We had all agreed to an interview with Norman Smith for Radio 4's Today programme to discuss the new group. As is so often the case nowadays this had all been organised through social media. Momentum is the new group which has been set up as the successor to the Jeremy Corbyn for Labour leader campaign. It is still in its infancy, has no democratic structures as such (yet) and no specific rules to follow (other than an Interim Code of Ethics).

Local groups are springing up across the U.K and many of those involved are still coming to their own conclusions about exactly what Momentum is. The non-austerity British Labour party and reality – Part 2. In Part 1 of this two-part blog I laid out a general analytical framework for considering fiscal rules that might allow governments to borrow for infrastructure as long as all current expenditure is at least matched by taxation and other current receipts. 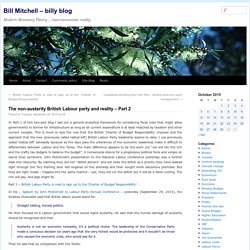 This is more or less the rule that the British ‘Charter of Budget Responsibility’ imposes and the approach that the new (previously called radical left) British Labour Party leadership aspires to obey. I use previously called ‘radical left’ advisedly because as the days pass the utterances of the economic leadership make it difficult to differentiate between Labour and the Tories. The Cult of Outstanding™: the problem with ‘outstanding’ lessons. First of all I need to come clean. 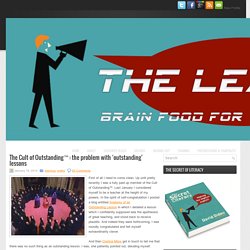 Up until pretty recently I was a fully paid up member of the Cult of Outstanding™. Last January I considered myself to be a teacher at the height of my powers. In the spirit of self-congratulation I posted a blog entitled Anatomy of an Outstanding Lesson in which I detailed a lesson which I confidently supposed was the apotheosis of great teaching, and stood back to receive plaudits. And indeed they were forthcoming. Stop the War Statement: The terrorist atrocity in Paris, 13 November 2015. We wish to express our condemnation at the terrorist attacks in Paris on Friday. 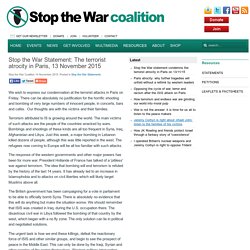 There can be absolutely no justification for the horrific shooting and bombing of very large numbers of innocent people, in concerts, bars and cafes. Our thoughts are with the victims and their families. Terrorism attributed to IS is growing around the world. The main victims of such attacks are the people of the countries wracked by wars. Paris: You Don’t Want to Read This. You don’t want to read this, and I take no pleasure in writing it, and no one really wants to hear it right now. 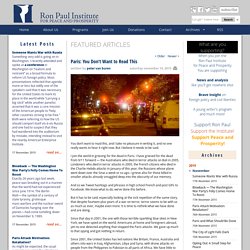 But I believe it needs to be said. I join the world in grieving for the dead in Paris. Paris - 13 November 2015 - West Yorkshire Fire & Rescue Service. I dedicate this blog to the memory of those who lost their lives in the terrorist attack on Paris on Friday 13 November 2015. 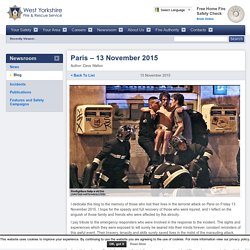 I hope for the speedy and full recovery of those who were injured, and I reflect on the anguish of those family and friends who were affected by this atrocity. I pay tribute to the emergency responders who were involved in the response to the incident. The sights and experiences which they were exposed to will surely be seared into their minds forever, constant reminders of this awful event. Their bravery, tenacity and skills surely saved lives in the midst of the marauding attack. You can only begin to imagine the horrors that people were exposed to and the thoughts that must have raced through their minds as they responded to the incident, the nature of which emerged all too clearly from the initial confusion.