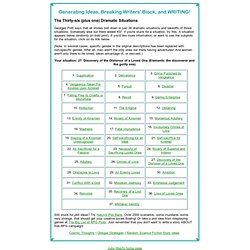 Somebody else out there added #37. If you're stuck for a situation, try this. A situation appears below randomly (in bold print). If you'd like more information, or want to see the subplots for the situation, click on its link below. (Note: In several cases, specific gender in the original descriptions has been replaced with non-specific gender. Your situation: 27. Still stuck for plot ideas? Cosmic Thoughts | Oblique Strategies | Random Science Fiction Story Ideas. General Fiction. Getting Around... 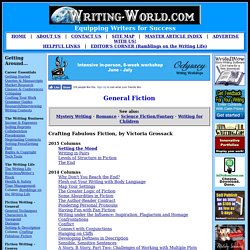 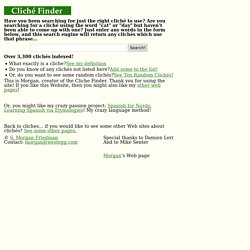 Are you searching for a cliché using the word "cat" or "day" but haven't been able to come up with one? Just enter any words in the form below, and this search engine will return any clichés which use that phrase... 100 jump-starters to cure your writer’s block - Pro Writing Tips. Creativity Boost #3 – Dictionary Excursion.

Inside the topsy-turvy world of contronyms. This article originally appeared on The Week. 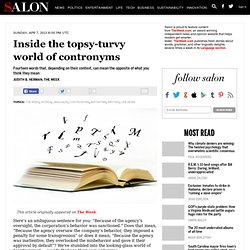 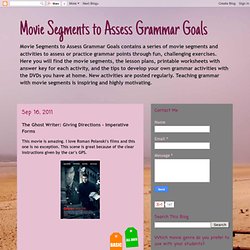 I love Roman Polanski's films and this one is no exception. This scene is great because of the clear instructions given by the car's GPS. I. Read the instruction the driver received from his GPS while driving to his destination. Choose the right verbs from the given ones below before watching the video. Harness the Mental, Creative, and Emotional Benefits of Regular Writing. My journal has without a doubt been a transformational tool in my life. 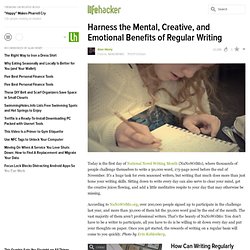 Just taking a bit of time to reflect on how the last week has gone and to renew my intentions for the coming week really keeps me on track, and alerts me early to any negative habits I am developing. It made it painfully clear to me why my NY Resolutions failed in the past. I simply didnt keep thinking about them. For me personally, having headings according to all the parts i want to keep in check (family, physical health, mental health, etc) works really well because it keeps me focussed on a balanced life. When you get hooked into something its easy to forget that other areas of your life exist. Introducing SmallWorld's WordSmithery. Welcome to SmallWorld's WordSmithery! 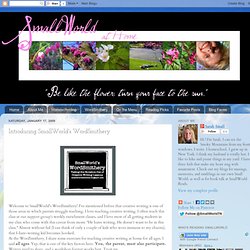 I've mentioned before that creative writing is one of those areas in which parents struggle teaching. I love teaching creative writing. Fundamentals of Fiction: Being Realistic. By Marg Gilks "I am always interested in why young people become writers, and from talking with many I have concluded that most do not want to be writers working eight and ten hours a day and accomplishing little; they want to have been writers, garnering the rewards of having completed a best-seller. 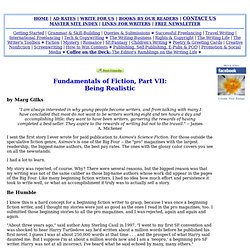 They aspire to the rewards of writing but not to the travail. " -- James A. Michener I sent the first story I ever wrote for paid publication to Asimov's Science Fiction. For those outside the speculative fiction genre, Asimov's is one of the Big Four -- the "pro" magazines with the largest readership, the biggest-name authors, the best pay rates. I had a lot to learn. My story was rejected, of course.

Fundamentals of Fiction: Avoid Those Beginners' Blunders. By Marg Gilks "Writing is easy; all you do is sit staring at a blank sheet of paper until the drops of blood form on your forehead. 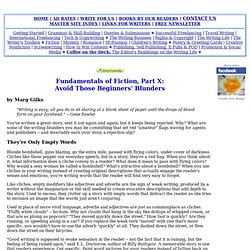 " -- Gene Fowler You've written a great story, sent it out again and again, but it keeps being rejected. Timeline Generator. One Sentence - True stories, told in one sentence. The Depressed Writer: An Interview with Julie Fast, Author of Get It Done When You’re Depressed. I’m on vacation this week, so I’m running an oldie-but-goodie that seemed to resonate with a lot of writers. 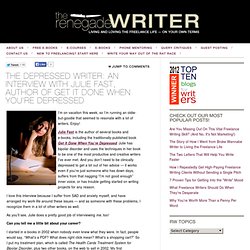 Enjoy! Julie Fast is the author of several books and e-books, including the traditionally-published book Get It Done When You’re Depressed. Julie has bipolar disorder and uses the techniques in her book to be one of the most productive and creative writers I’ve ever met. And you don’t need to be clinically depressed to get a lot out of her advice — it works even if you’re just someone who has down days, suffers from that nagging “I’m not good enough” inner voice, or has trouble getting started on writing projects for any reason. 5 situations where it's better to tell than show in your fiction. Good stuff; thanks for the article, and I agree with most of it.

I think I disagree, though, at least partly, with your point near the end about the emotional/psychological stuff; I think that a lot of the time that's exactly what "show, don't tell" is meant to be all about. For example, if your character is tired, you can say "She was tired. " 6-letter first names - - NamePlayground.com - the playground of first names. Every Photo Tells a Story/writing prompts/writers block. Writing. Writing. 6 Writers Who Broke the Rules and Got Away with It.

Have you ever read a book and noticed the author has broken what we writers often hear of as “the rules”? My initial reaction is usually indignation: “Why can she get away with that, and I can’t??” The more I study the craft of writing, the more rules I hear about, and most of these are guidelines based on making a book reader-friendly. As much as I believe it’s good practice to avoid the common pitfalls of beginning writers, there are always exceptions to every rule. Here are six commonly heard rules for writers, and six authors who’ve gotten away with breaking them. (By ‘gotten away with’, I mean being published, selling tons of copies, and in some cases, winning awards): Rule: Don’t write in First Person, Present Tense Audrey Niffenegger, The Time Traveler’s Wife: Niffenegger’s popular title is told by dual narrators from the first person point of view, in the present tense.