Mysql_insert_id. If you insert a data row by using the ON DUPLICATE KEY UPDATE clause in an INSERT-statement, the mysql_insert_id() function will return not the same results as if you directly use LAST_INSERT_ID() in MySQL. 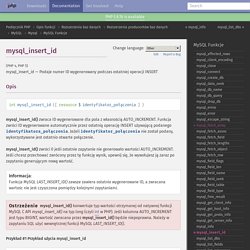 PHP File Uploading. A PHP script can be used with a HTML form to allow users to upload files to the server. 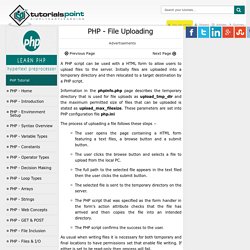 Initially files are uploaded into a temporary directory and then relocated to a target destination by a PHP script. Information in the phpinfo.php page describes the temporary directory that is used for file uploads as upload_tmp_dir and the maximum permitted size of files that can be uploaded is stated as upload_max_filesize. These parameters are set into PHP configuration file php.ini The process of uploading a file follows these steps − As usual when writing files it is necessary for both temporary and final locations to have permissions set that enable file writing. An uploaded file could be a text file or image file or any document.

Creating an upload form The following HTM code below creates an uploader form. <? It will produce the following result − Processing HTML checkbox forms with PHP. Form Processing with PHP. One of the best features of PHP is possibility to respond to user queries or data submitted from HTML forms. 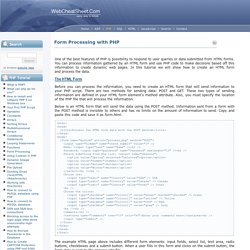 Below is an HTML form that will send the data using the POST method. The example HTML page above includes different form elements: input fields, select list, text area, radio buttons, checkboxes and a submit button. The Two Egg Problem. There are no tricks, gotchas or other devious ruses. 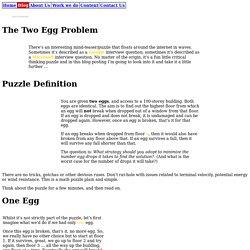 Don’t rat-hole with issues related to terminal velocity, potential energy or wind resistance. This is a math puzzle plain and simple. Think about the puzzle for a few minutes, and then read on. OK, let’s get back to the original two egg problem. As we’ve seen from above, the worst case using a binary search would break seven eggs; not acceptable when we only have two eggs. It does not take much imagination to see why a binary search solution will not work (optimally) for two eggs. This is certainly an improvement, but what is our worst case with this strategy?

We built Scribd into the #3 largest rails site by traffic and it worked for us, but these days I see a lot of new companies using rails and it feels like a mistake. 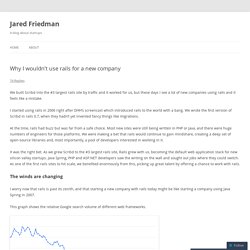 I started using rails in 2006 right after DHH’s screencast which introduced rails to the world with a bang. We wrote the first version of Scribd in rails 0.7, when they hadn’t yet invented fancy things like migrations. At the time, rails had buzz but was far from a safe choice. Most new sites were still being written in PHP or Java, and there were huge numbers of engineers for those platforms. We were making a bet that rails would continue to gain mindshare, creating a deep set of open-source libraries and, most importantly, a pool of developers interested in working in it. It was the right bet.