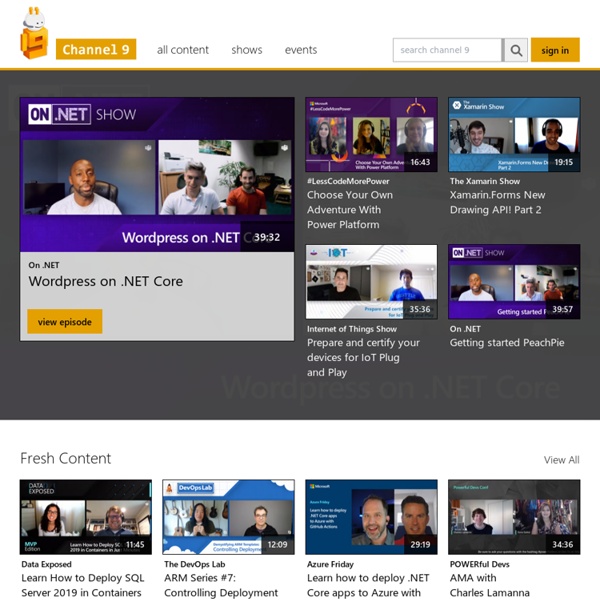 The guide to implementing 2D platformers Having previously been disappointed by the information available on the topic, this is my attempt at categorizing different ways to implement 2D platform games, list their strengths and weaknesses, and discuss some implementation details. The long-term goal is to make this an exhaustive and comprehensible guide to the implementation of 2D platform games. If you have any sort of feedback, correction, request, or addition – please leave it in the comments! Disclaimer: some of the information presented here comes from reverse engineering the behavior of the game, not from its code or programmers. Microsoft dominates Gamescom hall - Handy Tips Gamescom the European E3 kicks of in Germany later this month and over 600 companies will be exhibiting the latest in computer and video game hardware and software. The finalised maps of the three main halls have been released with the console manufacturers and the biggest publishers in Halle 5.2. Microsoft has reserved the most floorspace, it has two adjacent stands. Ubisoft, Nintendo, Take 2 and Sony will also have large exhibitor stands. Gamescom takes place in Cologne Germany from 21st to the 25th August.

Five Steps to Turn Your Hobby Into a Business You love making pastries and you do it well. It’s just a hobby, yet your friends and family always tell you how tasty your treats are. Is it time to quit your day job? Such has been the beginning of many American stories: people with a potentially money-making hobby who decide to convert that interest into a business. scripty2: for a more delicious web June 26th, 2009 The script.aculo.us 2 alpha is out! Check it out now at scripty2.com. As you would expect, it brings a lot of change and new features. welcome: 2d game development tutorial Welcome to the 2D Game Development Tutorial with XNA Game Studio. This tutorial will guide you through the creation of a two-dimensional action game – called Shooter – on Windows, Xbox 360, or Windows Phone 7. This tutorial will take about 90 minutes to complete. In this tutorial, you’ll be using the C# programming language. Previous knowledge in programming is helpful, but not required.

Microsoft makes company statistics interesting with the new "By The Numbers" website Microsoft has launched a brand new website to show off some figures about the company. If you've ever felt like knowing exactly how many minutes are accumulated through Skype calls (hint: 2 billion), this new resource is the perfect way of finding out, as well as figures and details for other Microsoft products and services. It's essentially a portfolio highlighting the company's success, but what about the losses and products that haven't taken off?

Ten Tips for the Shy Job Seeker In my previous post , I discussed the challenges for shy (or introverted ) people in the job market. I offered some general advice, but in this post I'd like to highlight ten things you can do (or think about) that might give you the edge in the very situations you prefer to avoid. 1. First, stop apologizing for being who you are. Work with it-- find your strengths and get to know them so well that they are all you think of when you are in the interview. Modkit and the Kickstarter Campaign - News by zagGrad | September 22, 2010 | 28 comments We're suckers for creative ideas that will help bring new people to the world of physical computing. So when we heard about Modkit we were all over it! In their own words:

HTML5 Game Dev Tutorials iOS 7.1 - minimal-ui is anything but minimal for HTML5 game developers Posted 15:16PM on March 20 2014 by Pascal Rettig This is a guest post from Odobo CTO Peter Mareš. As the developer program for real-money gaming, we assess the impact that any new software update is likely to have on our developer community. Windows Azure Adds New Features, Including SQL Server Support General Availability And New Push Features Microsoft introduced a laundry list of new features today for Windows Azure, including general availability of SQL Server AlwaysOn support, notification hubs and autoscale improvements. The new features have some common themes, focusing on systems automation that allows for use cases such as with Bing, which is using Azure notifications to send news updates to its users. SQL Server AlwaysOn Availability is the high availability and disaster recovery that was originally released with SQL Server 2012. It provides multiple database failover, replicas and configuration failover policies.