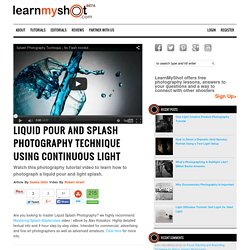 High Speed Primer - Introduction. We have done quite a bit of High Speed Photography here on DIYP, but never took it from a step by step approach starting with the basics and moving up to elaborate setups. 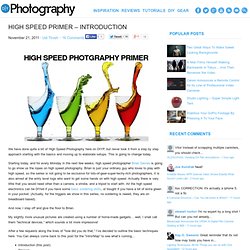 This is going to change today. Starting today, and for every Monday in the next few weeks, high speed photographer Brian Davies is going to go show us the ropes on high speed photography. Brian is just your ordinary guy who loves to play with high speed, so the series is not going to be exclusive for lots-of-gear-super-techy-rich photographers, it is also aimed at the entry level togs who want to get some hands on with high speed. Actually there is very little that you would need other than a camera, a strobe, and a tripod to start with. All the high speed electronics can be DIYed if you have some basic soldering skills, or bought if you have a bit of extra green in your pocket. And now, I step off and give the floor to Brian. 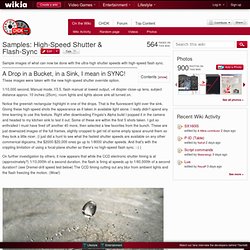 These images were taken with the new high-speed shutter override option. 1/10,000 second, Manual mode, f/3.5, flash manual at lowest output, +4 diopter close-up lens, subject distance approx. 10 inches (25cm), room lights and lights above sink all turned on. Notice the greenish rectangular highlight in one of the drops. That is the fluorescent light over the sink. Giving these high-speed shots the appearance as if taken in available light alone. On further investigation by others, it now appears that while the CCD electronic shutter timing is at (approximately?) I like this one, look at that way cool perfect ring floating on the surface.

This clearly shows the highlight from the fluorescent lamp above the sink. 45 Breathtaking Examples of Slow Shutter Speed Photography. Popped Bubble. Marbles part 6 photo - fotoopa photos at pbase. DSC_7491. Yoda. Blue Dance. The Sigma EF-500 flash - Light duration vs. output power. DIY - High Speed Photography at Home. How to take photos like the one you are seeing here. 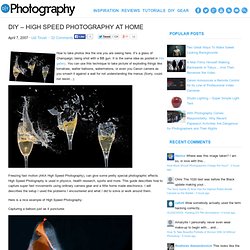 It’s a glass of Champaign, being shot with a BB gun. It is the same idea as posted in this gallery. You can use this technique to take picture of exploding things like tomatoes, watter balloons, watermelons, or even you Canon camera as you smash it against a wall for not understanding the menus (Sorry, could not resist…) DIY - Universal Sound and Optical Slave Flash Trigger. 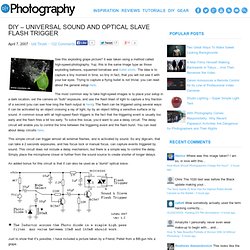 It was taken using a method called high-speed-photography. Yup, this is the same image type as those exploding balloons, squashed tomatoes and bullet shots. The idea is to capture a tiny moment in time, so tiny in fact, that you will not see it with your bar eyes. Trying to capture a flying bullet is not trivial, you can read about the general setup here. The most common way to take high-speed images is to place your setup in a dark location, set the camera on “bulb” exposure, and use the flash blast of light to capture a tiny fraction of a second (you can see how long the flash output is here). This simple circuit can trigger almost all external flashes, and is activated by sound. Advanced Photoshop Tutorial: Making Colors Pop. Creativity in the Photoshop Darkroom by Harold Davis, October 2010 (updated December 2010) Intro | Multi-RAW Processing | Creating HDR Images by Hand [Part I] | Creating HDR Images by Hand [Part II] | Sharpening in LAB Color | Converting to Black and White | Using LAB Color Adjustments | Inverting Backgrounds with LAB | Intro to Compositing | HDR in Adobe Photoshop CS5 | Using Image Apply Image | Aging Photos Roundup | Making Colors Pop in Photoshop Intro Image: These diminutive Sea Palms (a kind of kelp) were very attractive, but to get a great image from this composite photo I needed to make the colors pop using some of the techniques described in this article. 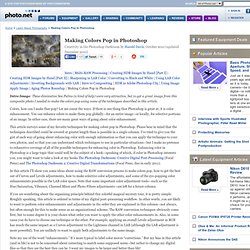 Colors, how can I make thee pop? Let me count the ways. If there is one thing that Photoshop is great at, it is color enhancement. This article surveys some of my favorite techniques for making colors pop in Photoshop. Hochgeschwindigkeitskamera. Creating "The Splash" Over the last few days, Flickr Explore has been sizzling with multiple pictures of Vincent Riemersma featuring splashes in wineglasses. 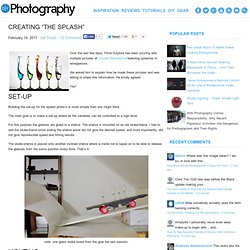 We asked him to explain how he made these pictures and was willing to share this information. He kindly agreed. Main Page - CameraAxe. Hobby Robotics. Camera Axe Motor Sensor Contest With this competition I’m focusing community attention on getting better motor controller support into the Camera Axe 5 sooner, while rewarding the winner with some free hardware. 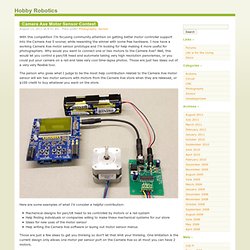 I now have a working Camera Axe motor sensor prototype and I’m looking for help making it more useful for photographers. Why would you want to connect one or two motors to the Camera Axe? Well, this would let you control a pan/tilt head and automate taking very high resolution panoramas, or you could put your camera on a rail and take very cool time-lapse photos. Those are just two ideas out of a very very flexible tool. The person who gives what I judge to be the most help contribution related to the Camera Axe motor sensor will win two motor sensors with motors from the Camera Axe store when they are released, or $100 credit to buy whatever you want on the store.

Camera Axe 5 Shield. This is the first Camera Axe shield, but it leverages the lessons learned from the previous four generations of Camera Axe hardware. 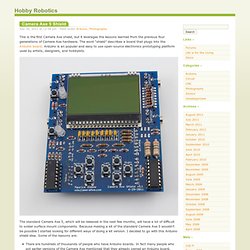 The word “shield” describes a board that plugs into the Arduino board. Arduino is an popular and easy to use open-source electronics prototyping platform used by artists, designers, and hobbyists. The standard Camera Axe 5, which will be released in the next few months, will have a lot of difficult to solder surface mount components.

Because making a kit of the standard Camera Axe 5 wouldn’t be possible I started looking for different ways of doing a kit version. I decided to go with this Arduino shield idea. There are hundreds of thousands of people who have Arduino boards. The both versions of the Camera Axe 5 will use 100% the same software and will both have the same capabilities. High Speed Air-gap Flash. A bullet hitting a solid brass rod. 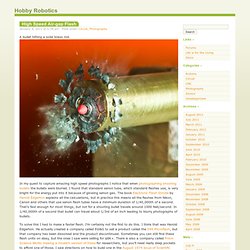 In my quest to capture amazing high speed photographs I notice that when photographing shooting bullets the bullets were blurred. I found that standard xenon tube, which standard flashes use, is very bright for the energy put into it because of glowing xenon gas. The book Electronic Flash Strobe by Harold Edgerton explains all the calculations, but in practice this means all the flashes from Nikon, Canon and others that use xenon flash tubes have a minimum duration of 1/40,000th of a second. That’s fast enough for most things, but not for a shooting bullet travels around 1000 feet/second. In 1/40,000th of a second that bullet can travel about 1/3rd of an inch leading to blurry photographs of bullets. Alan_sailer. [ Was a very, very obscure photographer working in his garage shooting stuff with a pellet rifle and photographing the results with a home built flash. Then in early 2009, someone linked one of my pictures to a social networking site.

My boss came by one day and told me my site was getting a huge number of views. Emails from magazines, newspapers and even Good Morning America started clogging my FlickrMail box. It was very stressful. After the dust settled down I now have a very nice view rate in the thousand or so per day. And now I'm a slightly less obscure photographer. After all, two point four billion Chinese and Indian nationals have never heard of me. Alan Sailer. Galerie de alan_sailer. Flash Interface. HiViz. About HiViz.com Some common misconceptions about high-speed photography are that it's only for experts and that it requires specialized and expensive equipment. The HiViz site is dedicated to dispelling those myths by providing...