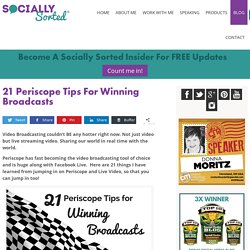 Not just video but live streaming video. Sharing our world in real time with the world. Periscope has fast becoming the video broadcasting tool of choice and is huge along with Facebook Live. Here are 21 things I have learned from jumping in on Periscope and Live Video, so that you can jump in too! I am no Periscope expert. What I can say is that it’s a great platform – super engaging, followers come thick and fast and you can build an active community very quickly. But what I hear often from Periscope and Facebook Live users is that they are hesitant to take the plunge and do their first broadcast or “scope”.

It is intimidating at first… to press that BROADCAST Button. But it’s also a bit like ripping off a bandaid – the earlier you jump in, the easier it is, and I hope these tips make it quick, easy and fun for you! Ready? Periscope Tips for a Winning Broadcast Preparing to Broadcast #1 Set Up Your Profile the Smart Way #5 Be Discoverable. The Beginner's Guide to Using Periscope for Education - Pike Mall Tech. Periscope, Twitter's live video streaming app, is taking the education world by storm. 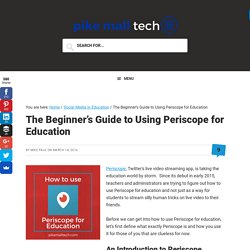 An Introduction to Periscope Periscope is a live video streaming app that Twitter purchased before Periscope launched to the public. That fact alone should make you stand up and take notice about how important a company like Twitter thinks that live streaming video really is in today's social media landscape. As such, those of us in education should probably take notice and figure out how we can use this app to our advantage. The great thing about Periscope is that it integrates directly with your Twitter account. @martypark. A Beginner's Guide to Using Periscope. If you haven’t downloaded Periscope to your phone, you’re missing out. 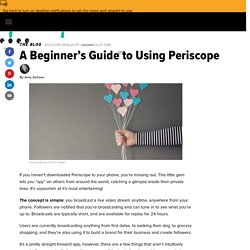 This little gem lets you “spy” on others from around the world, catching a glimpse inside their private lives. It’s voyeurism at it’s most entertaining! The concept is simple: you broadcast a live video stream anytime, anywhere from your phone. Followers are notified that you’re broadcasting and can tune in to see what you’re up to. Broadcasts are typically short, and are available for replay for 24 hours. Users are currently broadcasting anything from first dates, to walking their dog, to grocery shopping; and they’re also using it to build a brand for their business and create followers. It’s a pretty straight-forward app, however, there are a few things that aren’t intuitively easy to figure out. Even if you shy away from doing video, it’s fun to follow what other people are up to! First of all, Periscope is owned by Twitter. Once you’re logged in, you’ll want to enable your camera, microphone, and location.

5 Quick Tips for Using Periscope, Twitter's Live Video Streaming App. In the last month or so, there's been a big surge in live video broadcasting. 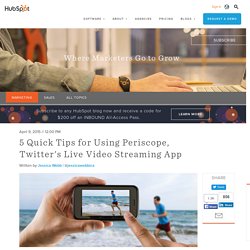 Thanks to smartphone apps like Periscope, users can record live video streams and share them with their network. For example, a friend of mine recently used Periscope to livestream an iPhone video of her walking her dog. She shared a link to the live stream on Twitter, and a few of her followers clicked through and watched her walk her dog in real time. Kind of weird, but at the same time, kind of cool. So, why are we writing about live streaming dog-walking videos on a marketing blog? Download our full guide to using Periscope and other live video streaming apps here. Whereas social media sites like Instagram and Vine let users record short video clips and post them online afterward, Periscope takes a different approach, allowing users to post live video streams of what they're doing at that very moment.