Why Search will be a Focus for Facebook in 2017 (and How it Will Impact Marketers) 5 Minute Librarian: New Facebook Groups for Librarians! Last year, we wrote a post highlighting all of the Facebook Groups that are for Public Librarians. 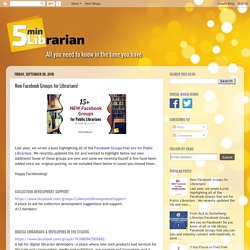 We recently updated the list and wanted to highlight below our new additions! Some of these groups are new and some we recently found! A few have been added since our original posting, so we included them below in cased you missed them. Happy Facebooking! Place to ask for collection development suggestions and support.413 members lab for digital librarian developers—a place where new tech products and services for libraries and communities, media and publishing, are created and innovated—and a space for discussion. 'The end of Trump': how Facebook deepens millennials' confirmation bias. HBO host John Oliver achieved the destruction of Donald Trump on 29 February 2016. 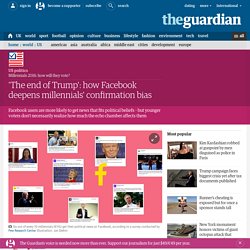 At least, according to the Daily Beast. Fansided, a popular social news aggregator, dates Trump’s destruction at 1 August while the Daily Good called it for 21 March. Salon found no fewer than “13 glorious times” that Oliver had destroyed the real estate tycoon. Sharp-eyed consumers of the news might note that it is impossible to, as the dictionary says, “put an end to the existence of something” more than a single time. But for #NeverTrump Facebook users who love any content they see as bringing Trump down a peg, the formulaic headline is indicative of the Facebook media landscape: the most shareable, clickable and likable content on the site aligns strongly with its readership’s pre-existing biases, assumptions and political affiliation. 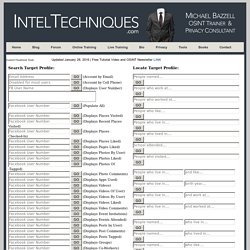 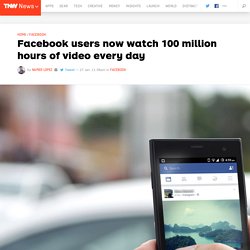 Mark Zuckerberg explained that users now watch 100 million hours of video daily on the platform. In light of this, he said the company is working on creating a dedicated video channel – a shot across the bow to YouTube. Run an awesome startup? Get your company on stage at TNW Europe. Apply for our startup program now! Apply free This perhaps comes as no surprise, given the investment the company has made to improve its video experience, including 360-degree videos and a pop-up player, as well as an overall emphasis on improving the mobile video experience. Timothy Boostrom is Not Real. Timothy Boostrom is Not Real How Facebook provides a nurturing home for catfishing scammers Meet Timothy Boostrom. 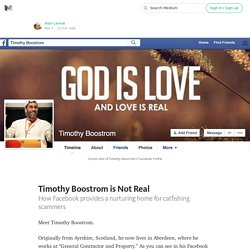 Originally from Ayrshire, Scotland, he now lives in Aberdeen, where he works at “General Contractor and Property.” As you can see in his Facebook profile, God is important to Timothy. His stream and photos are full of heartfelt images proclaiming Timothy’s commitment to God’s real love, as well as photos of Timothy in various mountainous locations in Scotland. Look at Timothy out there in the fields of Scotland with the ponies. 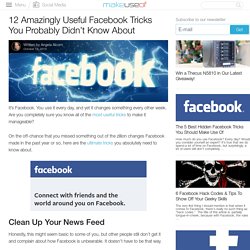 You use it every day, and yet it changes something every other week. Are you completely sure you know all of the most useful tricks to make it manageable? On the off-chance that you missed something out of the zillion changes Facebook made in the past year or so, here are the ultimate tricks you absolutely need to know about. Facebook Now the Number One Source for Political News - Study. A new study by Pew Research has found that Facebook is ‘far and away the most common source for news about government and politics’ among Millennials in the U.S. 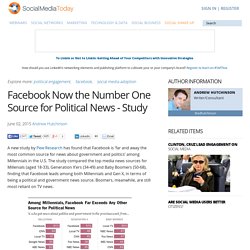 The study compared the top media news sources for Millenials (aged 18-33), Generation X’ers (34-49) and Baby Boomers (50-68), finding that Facebook leads among both Millennials and Gen X, in terms of being a political and government news source. Boomers, meanwhile, are still most reliant on TV news. While the data itself is not overly surprising, the significance of the gap between Facebook (61%) and the next closest source (CNN at 44%) is something that can’t be ignored, particularly when considering the breadth of that age bracket. People aged 18 to 34 make up around 20.7% of the American population, according to U.S. Census figures from 2013. In an Instant. Ten Facebook Pages You Need to Stop Sharing From. A friend of mine shared an eyebrow-raising article on Facebook. 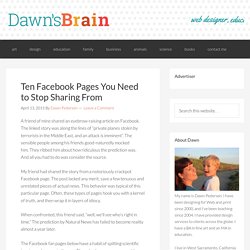 The linked story was along the lines of “private planes stolen by terrorists in the Middle East, and an attack is imminent”. The sensible people among his friends good-naturedly mocked him. They ribbed him about how ridiculous the prediction was. And all you had to do was consider the source. My friend had shared the story from a notoriously crackpot Facebook page.

When confronted, this friend said, “well, we’ll see who’s right in time.” The Facebook fan pages below have a habit of spitting scientific inquiry and reason in the eye. Parents, This Is How You Can Protect Your Kids On Facebook [Weekly Facebook Tips] Do you have any idea what your kids do on Facebook? 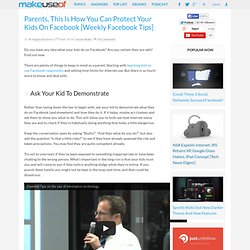 Are you certain they are safe? Find out now. There are plenty of things to keep in mind as a parent. Starting with teaching kids to use Facebook responsibly and setting time limits for Internet use. But there is so much more to know and deal with. Ask Your Kid To Demonstrate Rather than laying down the law to begin with, ask your kid to demonstrate what they do on Facebook (and elsewhere) and how they do it. Keep the conversation open by asking “Really?” Try not to overreact if they’ve been exposed to something inappropriate or have been chatting to the wrong person. Clean Up Their Profile, Friends & Apps For starters, make sure your kids have the correct age in their Facebook profile. Occasionally check over their profile to make sure they’re not giving away sensitive information like their address, phone number or school name.

Also check out the Facebook apps & games your child has installed. What are the Best Practices for Facebook Pages in 2014? [INFOGRAPHIC] #smlondon.