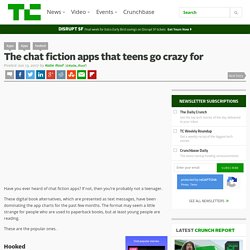 If not, then you’re probably not a teenager. These digital book alternatives, which are presented as text messages, have been dominating the app charts for the past few months. The format may seem a little strange for people who are used to paperback books, but at least young people are reading. These are the popular ones. Hooked Hooked is the app that started the frenzy. Users have to keep scrolling to find out what happens next. It costs $2.99 per week or $39.99 per year. Yarn Yarn is a lot liked Hooked. Some of those include hypothetical conversations with A-list celebrities or imaginary group chats about dating. And like Hooked, it’s currently ranked higher than the Kindle. Tap Tap was recently introduced by Wattpad, the social publishing platform.

Well, if the business model isn’t broken, don’t fix it. This app is also doing quite well in the rankings. Prompt: This life-changing app reminds people who forget. Big benefits The big idea for the future is that by choosing to share information like her calendar, contacts, and GPS location, your granny can still enjoy the trip to her friend’s house, without feelings of anxiety about getting lost. 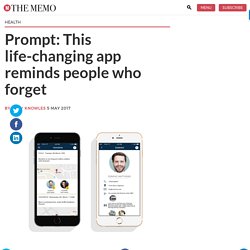 What’s more, friends and relatives won’t need to clip her independence by insisting on giving her a lift, or bombarding her with intrusive visits and phone-calls. Think OneNote and Evernote Are Bloated? Try These Lightweight Note-Taking Apps. I absolutely love OneNote. 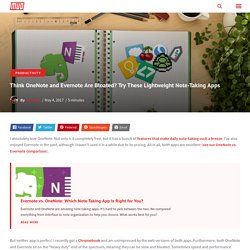 Not only is it completely free, but it has a bunch of features that make daily note-taking such a breeze. I’ve also enjoyed Evernote in the past, although I haven’t used it in a while due to its pricing. All in all, both apps are excellent (see our OneNote vs. Evernote comparison). How to Save (and Share) Everything You Learn With These 11 Apps. Picture your brain. 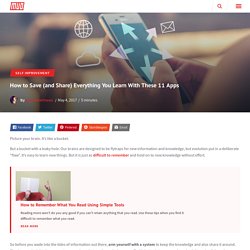 It’s like a bucket. But a bucket with a leaky hole. Our brains are designed to be flytraps for new information and knowledge, but evolution put in a deliberate “flaw”. Digital Apps Library. 22 Apps To Make Videos In The Classroom. 22 Of The Best Apps To Make Videos In The Classroom by TeachThought Staff In education, perhaps one of the least utilized talents of iOS hardware is creating exceptional video. 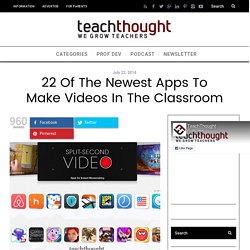 While it’s not uncommon for teachers and students to use iPads to create videos, creating stunning videos that are compelling, well-produced, innovative, truly social, and/or something worth sharing with the world isn’t so easy. An Interesting Infographic Featuring 12 iPad Apps Ideal for Librarians. 50 Best Social Media Tools From 50 Most Influential Marketers Online. Word Swag App - Generate Cool Text, Words & Quotes on Your Photos. You can now broadcast live video from the Twitter app - The Verge.

Meerkat Reawakens as ‘Houseparty’, a Multi-Participant Live-Stream App. As you may recall, way back in early 2015, a little app named Meerkat suddenly burst onto the scene at SXSW. 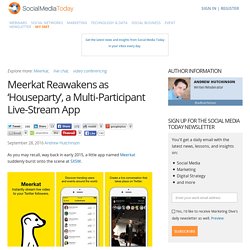 It suddenly became the app that everyone had to have – while live-streaming, as a practice, had existed for some time in various forms, Meerkat was the first app to utilize mobile technology and advanced connective capacity to make it immediate. You just press a button and you’re live, anytime, anywhere, broadcasting to anyone who wanted to tune in. And along with that surge in hype came money – the new app quickly raised $12 million at a $40 million valuation, with high profile investors like Gary Vaynerchuk, Ashton Kutcher and Jared Leto jumping on board. Other investors included Universal Music Group and various talent agencies – many saw Meerkat as the next big social platform, a new breeding ground for the next generation of social stars, and they were keen to get in on the ground floor to capitalize on its coming success.

Now your photos look better than ever – even those dusty old prints. Photos from the past, meet scanner from the future Google Photos is a home for all your photos and videos, but what about those old prints that are some of your most treasured memories? 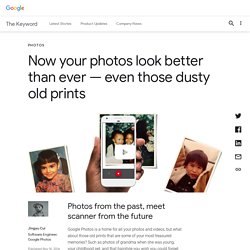 Such as photos of grandma when she was young, your childhood pet, and that hairstyle you wish you could forget. We all have those old albums and boxes of photos, but we don’t take the time to digitize them because it’s just too hard to get it right. We don’t want to mail away our original copy, buying a scanner is costly and time consuming, and if you try to take a photo of a photo, you end up with crooked edges and glare. We knew there had to be a better way, so we’re introducing PhotoScan, a brand new, standalone app from Google Photos that easily scans just about any photo, free, from anywhere.

PhotoScan gets you great looking digital copies in seconds - it detects edges, straightens the image, rotates it to the correct orientation, and removes glare. Pro edits, no pro needed. App to store old family photos launched. Image copyright Donna Fallows A smartphone app that allows people to upload, store and share their old photographs has been launched by two British entrepreneurs. 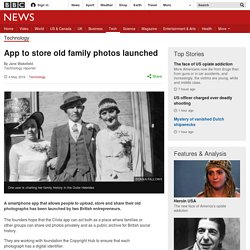 The founders hope that the Clixta app can act both as a place where families or other groups can share old photos privately and as a public archive for British social history. They are working with foundation the Copyright Hub to ensure that each photograph has a digital identifier. The app will be free initially. Image copyright Neil Wilson The idea was formed when Dean Newsome and Shaun Cutler - who describe themselves as middle-aged dads rather than typical entrepreneurs - started talking by the side of a football pitch in Morpeth, Northumberland. Word Dance  - Bev Humphrey​ Word Dance - Word Cloud Video Generator on the App Store. Mauras Trip Reveal. Augmented Reality Apps. Pack for iPad: Our List of the Essential iPad Apps. 16 Essential Tools to Help Streamline Your Workload This Summer.

When it comes to managing an ever-growing to-do list, many people struggle to get everything done. 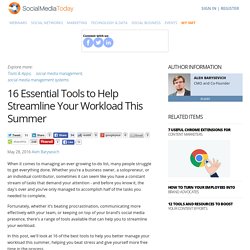 Whether you’re a business owner, a solopreneur, or an individual contributor, sometimes it can seem like you have a constant stream of tasks that demand your attention - and before you know it, the day's over and you’ve only managed to accomplish half of the tasks you needed to complete. Fortunately, whether it’s beating procrastination, communicating more effectively with your team, or keeping on top of your brand’s social media presence, there's a range of tools available that can help you to streamline your workload. In this post, we'll look at 16 of the best tools to help you better manage your workload this summer, helping you beat stress and give yourself more free time in the process. 1. 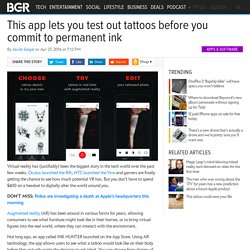 Oculus launched the Rift, HTC launched the Vive and gamers are finally getting the chance to see how much potential VR has. But you don’t have to spend $600 on a headset to digitally alter the world around you. DON’T MISS: Police are investigating a death at Apple’s headquarters this morning Augmented reality (AR) has been around in various forms for years, allowing consumers to see what furniture might look like in their homes, or to bring virtual figures into the real world, where they can interact with the environment. Not long ago, an app called INK HUNTER launched on the App Store. How to Organize Your Google Drive Like a Pro. Advertisement Google Drive can be a fantastic productivity and collaboration tool. Forbes Welcome. Thanks for coming to Forbes. Please turn off your ad blocker in order to continue. To thank you for doing so, we’re happy to present you with an ad-light experience. Hi again. 10 Tricks to Make Yourself a Chromecast Master. Hound App. The 5 Best iPad RSS Readers.

Here’s how it works. When you launch the app, you land directly in the live stream creation screen. 15 Essential Apps For The Organized Teacher. Organization Apps? Here Are 15 Essential Apps For The Organized Teacher by TeachThought Staff. How to use Overcast to maximize your podcast fun. News Apple may face $862 million in damages for allegedly infringing on a patent owned by the University of Wisconsin-Madison’s patent licensing wing, the Wisconsin Alumni Research Foundation. The Apple technologies which take advantage of said patent for increased processor efficiency? None other than the A7, A8 and A8X chips, which are found in the iPhone 5s, 6 and 6 Plus handsets, as well as several iPad models.

Snapseed on the App Store. Downloading Apps on Android: Everything You Need to Know. 55 Apps That Can Make You More Productive. Fastest Ways to Transfer Files Between PCs and Mobile Devices. Apps for Librarians: Digital Literacy with Mobile Apps. Consumers Spend 85% Of Time On Smartphones In Apps, But Only 5 Apps See Heavy Use. Fluent Mind Map- Create Beautiful Mind Maps on Your iPad.

April 15, 2015Fluent Mind Map is an excellent iPad app that you can use to easily map your thoughts and generate and organize your ideas into an elegant mind map. Fluent Mind Map provides you with easy to use editor where you can add nodes, change text, make colourful nodes, zoom in and out, and many more. Social Posters — Checkthis.