A diversity of voices 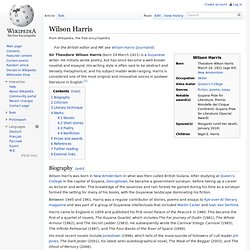 He initially wrote poetry, but has since become a well-known novelist and essayist. His writing style is often said to be abstract and densely metaphorical, and his subject matter wide-ranging. Harris is considered one of the most original and innovative voices in postwar literature in English.[1] Biography[edit] Wilson Harris. His work is often regarded as ‘difficult’ by both his Caribbean and his European audiences, and this is partly because of its deep philosophical grounding in the work of Hegel, Heidegger and others, and partly because of its roots in Latin American traditions largely incommensurable with European realisms. 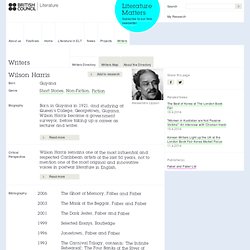 His fiction consistently rejects conventional devices of plot, setting and character. Nevertheless, as one of his most respected commentators, Michael Gilkes once put it: The Palace of the Peacock: Wilson Harris and the Curriculum in Troubled Times - Review of Education, Pedagogy, and Cultural Studies - Volume 18. Palace of the Peacock Summary - Wilson Harris - Magill's Survey of World Literature, Revised Edition. Palace of the Peacock contains most of the elements that Harris elaborates upon in his later works, and it establishes his rejection of the conventional European style of fiction writing, which follows a linear pattern of narration and in which all aspects of the story are finally brought together to a logical conclusion. 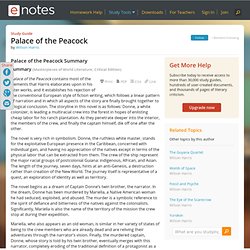 The storyline in this novel is as follows: Donne, a white colonizer, is leading a multiracial crew into the forest in hopes of enlisting cheap labor for his ranch plantation. Harris Techniques. Part One: The Technique of Combination David P. 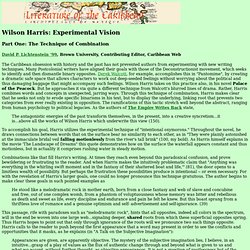 Lichtenstein '99, Brown University, Contributing Editor, Caribbean Web The Caribbean obsession with history and the past has not prevented authors from experimenting with new writing techniques. Many Postcolonial writers have aligned their goals with those of the Deconstructionist movement, which seeks to identify and then dismantle binary opposites. R. K. Narayan. R. 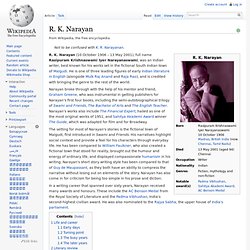 K. Narayan (10 October 1906 – 13 May 2001), full name Rasipuram Krishnaswami Iyer Narayanaswami, was an Indian writer, best known for his works set in the fictional South Indian town of Malgudi. The Guide. The Guide is a 1958 novel written in English by the Indian author R. 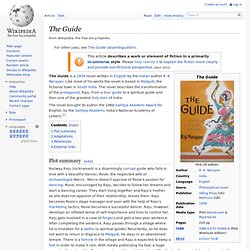 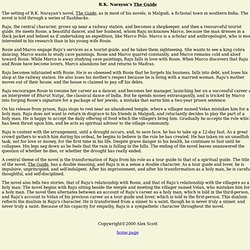 Narayan’s The Guide The setting of R.K. Narayan’s novel, The Guide, as in most of his novels, is Malgudi, a fictional town in southern India. R. K. Narayan: The Guide. Using this Guide List of other study guides R[asipuram] K[rishnaswamy] Narayan (1906-2001) is unusual among Indian authors writing in English in that he has stayed contentedly in his home country, venturing abroad only rarely. 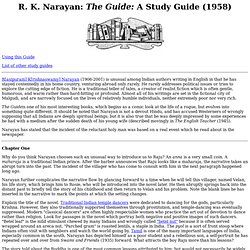 The Guide: A Novel (Penguin Classics): Amazon.co.uk: R. K. Narayan. This is the first Narayan novel I have read and I found his storytelling impressive. 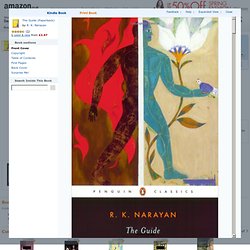 His characters come right off the page - and I loved the sights, sounds and smells of the Southern India he depicts. The set-up for this tale is engaging: a man leaves prison, hoping to re-integrate with society unnoticed...but ends up being mistaken for a holy man and becomes the centre of undesired attention. I enjoyed the comment made about the madness of herd mentality (there's a wonderful scene at the end where the people are scrambling to find spare water so that Raju can stand knee-deep in a river - in order to pray for rain to end a drought). I agree with a previous review that perhaps too much time was spent on the Raju/Rosie romance...they are such strong characters, however, that the narrative manages to sustain their story arc without too much strain. V. S. Naipaul. Vidiadhar Surajprasad Naipaul (/ˈnaɪpɔːl/ or /naɪˈpɔːl/; b. 17 August 1932), is a Trinidad-born Nobel Prize-winning British writer known for the comic early novels of Trinidad, the bleaker later novels of the wider world, and the chronicles of his life and travels.[1] Naipaul has published more than 30 books, both of fiction and nonfiction, over some 50 years. 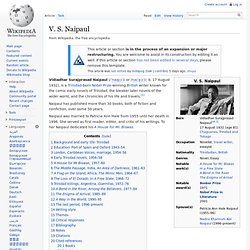 A House for Mr Biswas. A House for Mr Biswas is a 1961 novel by V. S. Naipaul, significant as Naipaul's first work to achieve acclaim worldwide. It is the story of Mohun Biswas, an Indo-Trinidadian who continually strives for success and mostly fails, who marries into the Tulsi family only to find himself dominated by it, and who finally sets the goal of owning his own house. Drawing some elements from the life of Naipaul's father,[1][2] the work is primarily a sharply-drawn look at life that uses postcolonial perspectives to view a vanished colonial world. Plot[edit] A House for Mr. Biswas by V S Naipaul.

*A gripping masterpiece, hailed as one of the 20th century's finest novels* A HOUSE FOR MR BISWAS is V.S. A House For Mr. Biswas (f) - Vidiadhar Surajprasad Naipaul - Google Books. A House for Mr Biswas Summary. A House for Mr Biswas Summary Plot Summary A House for Mr. Biswas is the story of a Trinidad native of Indian ancestry. Mohun Biswas is nominally Hindu, although he questions much of traditional Hindu Indian culture. The novel has been called tragicomic, but Mr. As the novel begins, Mohun Biswas's two older brothers are illiterate buffalo herders on a sugar estate. Wole Soyinka. Akinwande Oluwole "Wole" Soyinka (Yoruba: Oluwo̩lé S̩óyinká, pronounced "Shoyinka") (born 13 July 1934) is a Nigerian writer, notable especially as a playwright and poet; he was awarded the 1986 Nobel Prize in Literature,[1] the first person in Africa to be so honoured.

Ngũgĩ wa Thiong'o (Gikuyu pronunciation: [ŋɡoɣe wa ðiɔŋɔ]; born 5 January 1938)[1] is a Kenyan writer, formerly working in English and now working in Gikuyu. Ngugi wa Thiong'o. Profile: Ngugi wa Thiong'o. Acclaimed Kenyan author Ngugi wa Thiong'o, attacked by armed robbers during a visit home after 22 years in exile, has been a controversial figure in Kenya for the past quarter of a century. As a writer, playwright, journalist and lecturer he has been widely regarded as East Africa's most influential writer. His criticism of colonial rule, Christianity and post colonial abuses earned him as much admiration from the public as trouble from Kenya's authorities.

The Color Purple. Plot summary[edit] Celie, the protagonist and narrator, is a poor, uneducated, fourteen-year-old black girl living in the American South. She writes letters to God because the man she believes to be her father, Alphonso, beats and rapes her. The Color Purple: Context. Read an Excerpt of The Color Purple by Alice Walker – Harcourt. James Baldwin. Go Tell It on the Mountain (novel)

Narrative of the Life of Frederick Douglass, 1845 (ebook)