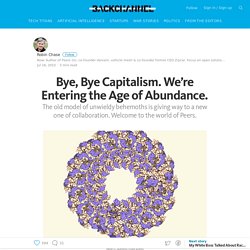 Welcome to the world of Peers. Compare the phone you had as a kid to the one in your pocket now. The first was a telephone owned by a monopoly that you used at most only minutes a day. The latter is a smart networked device you refer to hundreds of times. The difference? This cycle of opening up excess capacity, INCs building platforms for participation, and connecting billions of diverse Peers to create and collaborate together, is the path to abundance. Peers Inc partnerships are everywhere.

The French startup BlaBlaCar shares long distance car trips, connecting drivers with extra seats and travelers going in the same direction. Throughout the last century companies have made money by hoarding stuff: assets, intellectual property, people. In the new collaborative economy, sharing and networking assets, like platforms, car seats and bedrooms, will always deliver more value faster. The end of capitalism has begun. The red flags and marching songs of Syriza during the Greek crisis, plus the expectation that the banks would be nationalised, revived briefly a 20th-century dream: the forced destruction of the market from above.

For much of the 20th century this was how the left conceived the first stage of an economy beyond capitalism. The force would be applied by the working class, either at the ballot box or on the barricades. The lever would be the state. The opportunity would come through frequent episodes of economic collapse. Instead over the past 25 years it has been the left’s project that has collapsed. If you lived through all this, and disliked capitalism, it was traumatic. As with the end of feudalism 500 years ago, capitalism’s replacement by postcapitalism will be accelerated by external shocks and shaped by the emergence of a new kind of human being. Postcapitalism is possible because of three major changes information technology has brought about in the past 25 years. Arthur Koestler, Some general properties of self-regulating open hierarchic order (1969)

1. The holon 1.1 The organism in its structural aspect is not an aggregation of elementary parts, and in its functional aspects not a chain of elementary units of behaviour. 1.2 The organism is to be regarded as a multi-levelled hierarchy of semi-autonomous sub-wholes, branching into sub-wholes of a lower order, and so on. Sub-wholes on any level of the hierarchy are referred to as holons. 1.3 Parts and wholes in an absolute sense do not exist in the domains of life. 1.4 Biological holons are self-regulating open systems which display both the autonomous properties of wholes and the dependent properties of parts. 1.5 More generally, the term "holon" may be applied to any stable biological or social sub-whole which displays rule-governed behaviour and/or structural Gestalt-constancy. 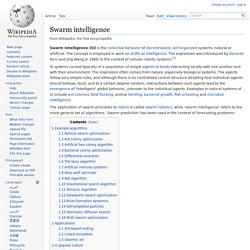 The concept is employed in work on artificial intelligence. The expression was introduced by Gerardo Beni and Jing Wang in 1989, in the context of cellular robotic systems.[1] The application of swarm principles to robots is called swarm robotics, while 'swarm intelligence' refers to the more general set of algorithms. 'Swarm prediction' has been used in the context of forecasting problems. Example algorithms[edit] Particle swarm optimization[edit] Ant colony optimization[edit] Artificial bee colony algorithm[edit] Artificial bee colony algorithm (ABC) is a meta-heuristic algorithm introduced by Karaboga in 2005,[5] and simulates the foraging behaviour of honey bees. Bacterial colony optimization[edit] Differential evolution[edit] Differential evolution is similar to genetic algorithm and pattern search. 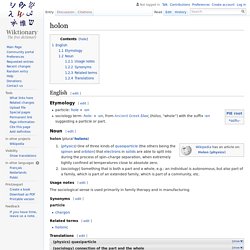 Noun[edit] holon ‎(plural holons) (physics) One of three kinds of quasiparticle (the others being the spinon and orbiton) that electrons in solids are able to split into during the process of spin–charge separation, when extremely tightly confined at temperatures close to absolute zero. Usage notes[edit] The sociological sense is used primarily in family therapy and in manufacturing. Synonyms[edit] particle chargon Related terms[edit] holonic.