Drug Recalls & Alerts - List of Drug and Medical Device Recalls. Pharmaceutical Companies Taking America to the Edge of Financial Disaster. Photo credit: bigstock.com By now, you have probably seen that Facebook meme which tells you that a bag of saline solution, which costs hospitals about $1, is billed to insurance companies at $500 per bag. 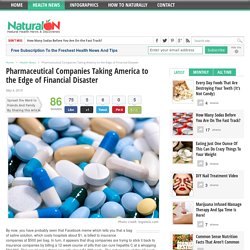 In turn, it appears that drug companies are trying to stick it back to insurance companies by billing a 12 week course of pills that can cure hepatitis C at a whopping $84,000. This would make these new pills about $1,000 each. The actual price of this 12 week program? About $136. Welcome to the land of the greedy. Back in December of 2013, the FDA approved a drug called Sovaldi, which is a new cure for hepatitis C.

Hepatitis C is a disease that slowly kills the liver. This drug is now the perfect illustration of how the American health care system is being bled dry and brought to the brink of bankruptcy through greed, lobbying, and an outrageous policy regarding the pricing of prescription drugs. India is refusing to play this game. Continue to Page 2. Big Pharma and Organized Crime — They are More Similar Than You May Think. 20th July 2015 By Carolanne Wright Contributing Writer for Wake Up World “It is scary how many similarities there are between this [pharmaceutical] industry and the mob. 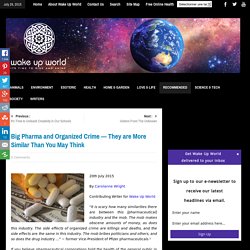 The mob makes obscene amounts of money, as does this industry. The side effects of organized crime are killings and deaths, and the side effects are the same in this industry. If you believe pharmaceutical corporations hold the health of the general public in high regard, it’s time to reconsider. As a physician and researcher, Peter C Gøtzsche has firsthand experience with the criminality behind the pharmaceutical industry — and subsequently exposed the massive fraud in “Deadly Medicines and Organized Crime: How Big Pharma Has Corrupted Healthcare.”

Dangerous Science Dr. Professor Peter C Gøtzsche graduated as a Master of Science in biology and chemistry in 1974 and as a physician 1984. A large part of Dr. Moreover, Gøtzsche drives home the truth that pharmaceuticals are just plain dangerous for a variety of reasons: The FDA Just Approved OxyContin to Be Prescribed to Children. By Josh Mur The infamously untrustworthy Food and Drug Administration (FDA) has furthered its reputation as one of America’s most beloved hypocrites with their latest motion. 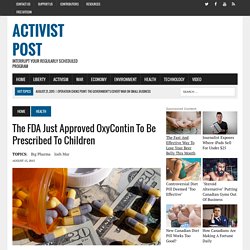 It was reported on Thursday that the FDA has just approved OxyContin prescriptions for children between the ages of 11 and 16 years old. For those unfamiliar, OxyContin is an opiate-based pharmaceutical painkiller used to ease severe pain. Aside from being known for its powerful effects on users, it is also notorious for its widespread abuse. Its effects on the mind and body are strikingly similar to heroin, making it dangerously addictive. Pharmakeia The Sorcerer's Wand. More Drug Recalls From India - Do You Trust Foreign-Made Generics? - The People's Pharmacy. The overwhelming majority of generic drugs are now made abroad. 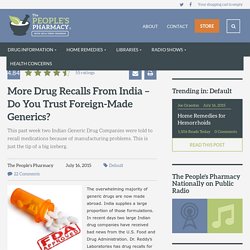 India supplies a large proportion of those formulations. In recent days two large Indian drug companies have received bad news from the U.S. Food and Drug Administration. America's doctors kill themselves at unprecedented rates. (NaturalNews) According to a 2005 article in the medical journal JAMA, male doctors are 70 percent more likely to kill themselves than other male professionals. 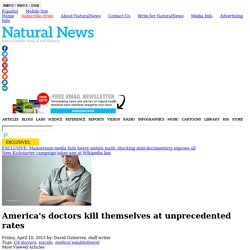 Female doctors are an astonishing 250 to 400 percent more likely to take their lives than their non-doctor counterparts. Why do U.S. doctors kill themselves at such an astonishingly high rate? While no one cause is obviously to blame, concerned observers are increasingly pointing the finger at a medical system that, from day one, fails to support or actively undermines students and doctors who may be struggling with mental illness. Show no weakness According to Pamela Wible, a Eugene, Oregon, family practitioner who researches and writes about the phenomenon of doctor suicide, an estimated 400 U.S. doctors kill themselves each year.

If all of those doctors were general practitioners with an average caseload of 2,300 patients, that would mean a million people's doctors killing themselves each year. "Accidental overdoses? " Materiel medical ProMedis (ex BHV Medical) - vente de materiel et equipement medical - ProMedis - BHV Médical. National Center for Biotechnology Information. Hosted by the Office of Scientific and Technical Information, U.S. Department of Energy.