The Bureau of Communication - Fill-in-the-blank Correspondence. Z-Type. Round 4: Your Daily Life in GIFs (29 GIFs) Internet, this is your life…in GIF form. 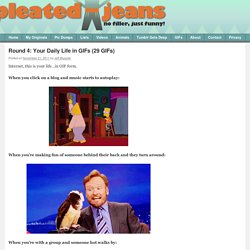 When you click on a blog and music starts to autoplay: When you’re making fun of someone behind their back and they turn around: When you’re with a group and someone hot walks by: When you have that annoying piece of hair that doesn’t do what it’s supposed to: When you make a reference to a TV show and no one gets it: When you hear the words ‘food’ and ‘free’ together: When all your friends are laughing at a joke about you: When you prove to someone that they are wrong: When you bump into the corner of a table: When someone likes your post on Facebook from, like, so long ago: A Trippy illusion. 25 Great Calvin and Hobbes Strips - Progressive Boink. Why Bill Watterson is our hero. 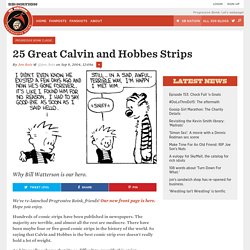 We've re-launched Progressive Boink, friends! Our new front page is here. Hope you enjoy. Hundreds of comic strips have been published in newspapers. The majority are terrible, and almost all the rest are mediocre. And it's really a shame that it's so difficult to quantify this strip's greatness. Calvin and Hobbes ran from 1985 to 1995. "Virtue needs some cheaper thrills. " © Universal Press Syndicate Calvin is an unbelievably intelligent six-year-old. It's kind of refreshing to see a strip that doesn't feel the need to have an uplifting message, or feel like it needs to point out that it's mean to whack an innocent person upside the dome with a snowball. - Jon "He's one of the old gods! One of the top classic Calvin strips. . - Bill "You've taught me nothing except how to cynically manipulate the system. " The Rubik's Cube Solution. How to Solve the Rubik's Cube in Seven Steps The world's most famous puzzle, simultaneously beloved and despised for it's beautiful simple complexity, the Rubiks Cube has been frustrating gamers since Erno Rubik invented it back in 1974. 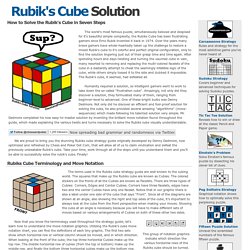 Over the years many brave gamers have whole-heartedly taken up the challenge to restore a mixed Rubik's cube to it's colorful and perfect original configuration, only to find the solution lingering just out of their grasp time and time again. The 50 most interesting articles on Wikipedia « Copybot. Deep in the bowels of the internet, I came across an exhaustive list of interesting Wikipedia articles by Ray Cadaster. 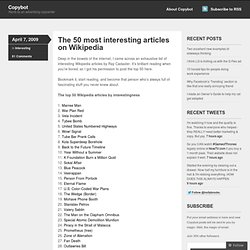 It’s brilliant reading when you’re bored, so I got his permission to post the top 50 here. Bookmark it, start reading, and become that person who’s always full of fascinating stuff you never knew about. The top 50 Wikipedia articles by interestingness 1. Marree Man 2. *Copybot is not responsible for the hours and hours that disappeared while you were exploring this list. Between Two Ferns with Zach Galifianakis: Jimmy Kimmel from Between Two Ferns, Comedy Deathray, Zach Galifianakis, Jimmy Kimmel, and BJPorter. Cubelets Engineering Prototypes. The Supernaturalist: Levitation. J.K.Rowling Official Site - Harry Potter and more. Galaxies. Pottermore: a unique online Harry Potter experience from J.K. Rowling. The Radioactive Orchestra.

What is the Radioactive Orchestra? 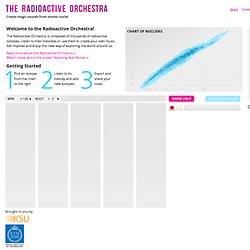 The Radioactive Orchestra is a “scientific musical translator” based on our current knowledge of the structure of atomic nuclei in nuclear physics. Using the Radioactive Orchestra, you can make melodies that are based on the nuclear energy levels and gamma radiation observed in experiments at accelerator laboratories around the world. Detailed information from thousands of different nuclei across the “chart of the nuclides” is available in the Radioactive Orchestra database. Some of this radiation is found due to natural radioactivity, which is present in the environment and in our bodies.

But most of it can only be found in the extreme environments created artificially in nuclear reaction experiments or nuclear reactors, in the interior of stars, or in other violent astrophysical processes like supernova explosions. Why did we create the Radioactive Orchestra? Our goal is to inspire. How does it work? Credits TRO is based on an idea by Prof. Selfcontrolfreak. The Fox Is Black » Bach’s Cantata 147, ‘Jesu, Joy of Man’s Desiring’ Played On a Giant Wooden Xylophone In a Forest.

This is probably the largest, least creative title for a post ever, but it’s also one of the most descriptive as well. 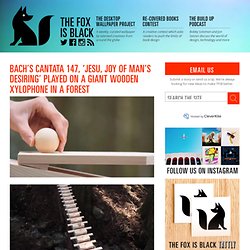 The video is a commercial by DOCOMO for the Touch Wood SH-08C, a limited edition phone of which there are only 15,000 being made. But honestly I could care less about the phone, this commercial is a thousand times more cool. By combining lord knows how many pieces of wood, they were able to make a long, downhill track that was able to reproduce Bach’s Cantata 147, Jesu, Joy of Man’s Desiring. This is a pretty phenomenal achievement and a beautiful piece of art. Huge props to Invisible Designs Lab’s Kenjiro Matsuo for making this crazy idea reality. Cracked.com - America's Only Humor & Video Site Since 1958.