The Art of Educational Videos - teche. The Exchange on Tuesday 29 July was a bumper edition focusing on video in education, presented by the Arts faculty. 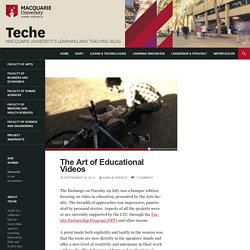 Consider yourself a 'visual' or 'auditory' learner? Turns out, there’s not much science behind learning styles. The idea that people have different styles of learning — that the visually inclined do best by seeing new information, for example, or others by hearing it — has been around since the 1950s, and recent research suggests it’s still widely believed by teachers and laypeople alike. 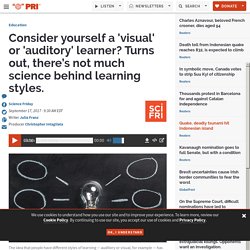 But is there scientific evidence that learning styles exist? “The short answer is no,” says Daniel Willingham, a psychology professor at the University of Virginia in Charlottesville. Learning styles should be easy to prove through science, he explains — for instance, by taking 50 auditory learners and 50 visual learners and exposing them to a mix of learning experiences.

Are teachers who sleep with boys getting off? Move over, Mrs. 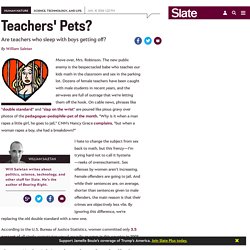 Robinson. The new public enemy is the bespectacled babe who teaches our kids math in the classroom and sex in the parking lot. Dozens of female teachers have been caught with male students in recent years, and the airwaves are full of outrage that we're letting them off the hook. On cable news, phrases like "double standard" and "slap on the wrist" are poured like pious gravy over photos of the pedagogue-pedophile-pet of the month. "Why is it when a man rapes a little girl, he goes to jail," CNN's Nancy Grace complains, "but when a woman rapes a boy, she had a breakdown? " Inspiring Spaces. Deserving Faces by Amy Fadeji. Music Education Can Help Children Improve Reading Skills. Children exposed to a multi-year programme of music tuition involving training in increasingly complex rhythmic, tonal, and practical skills display superior cognitive performance in reading skills compared with their non-musically trained peers, according to a study published in the journal Psychology of Music. 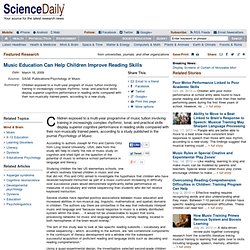 According to authors Joseph M Piro and Camilo Ortiz from Long Island University, USA, data from this study will help to clarify the role of music study on cognition and shed light on the question of the potential of music to enhance school performance in language and literacy. Several studies have reported positive associations between music education and increased abilities in non-musical (eg, linguistic, mathematical, and spatial) domains in children. All Research. Rhythm and Music Help Math Students. Stuck on a tricky math problem? 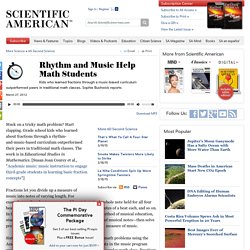 Start clapping. Grade school kids who learned about fractions through a rhythm-and-music-based curriculum outperformed their peers in traditional math classes. The work is in Educational Studies in Mathematics. [Susan Joan Courey et al., "Academic music: music instruction to engage third-grade students in learning basic fraction concepts"] The Correlation Between Music and Math: A Neurobiology Perspective. Duncan calls for NCLB repeal. In his speech, Duncan called for Congress to improve access to high-quality preschool in the law. 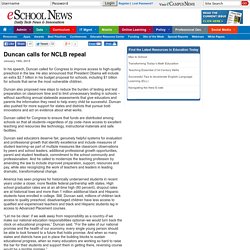 He also announced that President Obama will include an extra $2.7 billion in his budget proposal for schools, including $1 billion for schools that serve the most vulnerable children. Duncan also proposed new steps to reduce the burden of testing and test preparation on classroom time and to limit unnecessary testing in schools – without sacrificing annual statewide assessments that give educators and parents the information they need to help every child be successfu­­l. Duncan also pushed for more support for states and districts that pursue bold innovations and act on evidence about what works. Duncan called for Congress to ensure that funds are distributed among schools so that all students–regardless of zip code–have access to excellent teaching and resources like technology, instructional materials and safe facilities.

Brush Up On Your EdTech Vocabulary With This Cheat Sheet. Do you know what a flipped classroom requires? 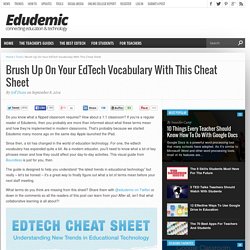 Study: Middle School Teachers as Savvy as Students with Tech. Researchers found that science teachers inside and outside the classroom aren't lagging behind the "digital natives" they teach when it comes to using technology. 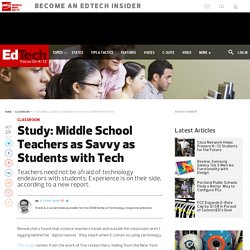 The study comes from the work of five researchers, hailing from the New York Institute of Technology, University of Connecticut and Utah State University. The result of their research, posted on the academic research website Springer in October, should bolster the confidence of teachers who feel intimidated about using technology in the classroom. The team surveyed 1,079 middle school students, 774 from Utah and 305 New York, as well as 24 middle school science teachers from those states, ages 23–56, to discover how they compare in terms of tech experience. Teacher to parents: About THAT kid (the one who hits, disrupts and influences YOUR kid)

Amy Murray is the director of early childhood education at the Calgary French & International School in Canada. 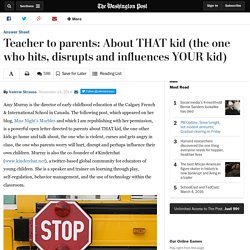 The following post, which appeared on her blog, Miss Night’s Marbles and which I am republishing with her permission, is a powerful open letter directed to parents about THAT kid, the one other kids go home and talk about, the one who is violent, curses and gets angry in class, the one who parents worry will hurt, disrupt and perhaps influence their own children. What it really means to be a public school educator today.

You think you know what teachers do. Right? Wrong. - The Washington Post.