Table Of Twelve: Lunch With The Ladies At Foxley Crofton. For those of you Esoteric who have not befriended us on Facebook, you will be unaware of a daily feature of that page, “An Esoteric ‘Just Because I Thought It Interesting!’” 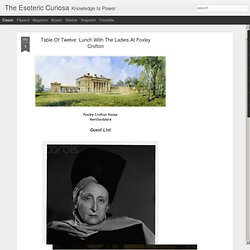 A truly enjoyable inclusion, with an emphasis of enriching the little gray cells, as well as a visual feast for the eyes! Portraits, accompanied by thumb nail sketches provided for your Esoteric edification are the tenor of the day! I highly encourage for those of you so inclined, stopping by here as a day by day routine. However, I would encourage those of you who enjoy this feature to join The Esoteric Curiosa as a friend on Facebook so that you can relish it on a daily basis without having to wait a full week. Thank you again for all your support, and don’t forget to click the link at the bottom of this post to become a friend.

An Esoteric ‘Just Because I Thought It Interesting!’ 1916 Margot and H. H. Asquith at Armstrong Works out take. Searching public records. Registration certificates for births, marriages and deaths are among the main building blocks in family history research. 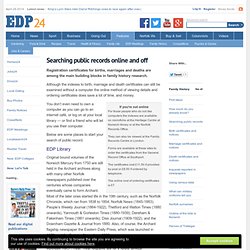 E A Bowles of Myddelton House Society, Enfield. 'E A Bowles' Edward Augustus Bowles "Gussie" to his friends was one of the 20th century's great gardeners. 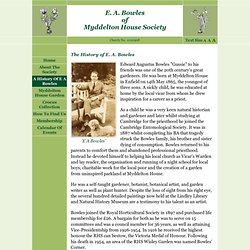 He was born at Myddelton House in Enfield on 14th May 1865, the youngest of three sons. A sickly child, he was educated at home by the local vicar from whom he drew inspiration for a career as a priest. As a child he was a very keen natural historian and gardener and later whilst studying at Cambridge for the priesthood he joined the Cambridge Entomological Society. It was in 1887 whilst completing his BA that tragedy struck the Bowles family, his brother and sister dying of consumption. He was a self-taught gardener, botanist, botanical artist, and garden writer as well as plant hunter. Bowles joined the Royal Horticultural Society in 1897 and purchased life membership for £26.

Many strange, rare and difficult plants were successfully grown at Myddelton House and people came from far and wide to admire them. My Garden in Spring. Biographies of E A Bowles: Allan, Mea. Top. E A Bowles of Myddelton House Society, Enfield. Gertrude Jekyll. Hestercombe Gardens Early life[edit] Jekyll was born at 2 Grafton Street, Mayfair, London, the fifth of the seven children of Captain Edward Joseph Hill Jekyll, an officer in the Grenadier Guards, and his wife Julia Hammersley. 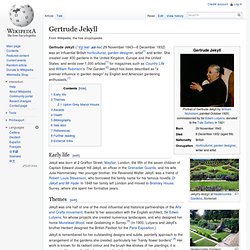 Her younger brother, the Reverend Walter Jekyll, was a friend of Robert Louis Stevenson, who borrowed the family name for his famous novella Dr Jekyll and Mr Hyde. In 1848 her family left London and moved to Bramley House, Surrey, where she spent her formative years. Themes[edit] Jekyll is remembered for her outstanding designs and subtle, painterly approach to the arrangement of the gardens she created, particularly her "hardy flower borders".[4] Her work is known for its radiant colour and the brush-like strokes of her plantings; it is suggested by some that the Impressionistic-style schemes may have been due to Jekyll's deteriorating eyesight, which largely put an end to her career as a painter and watercolourist. 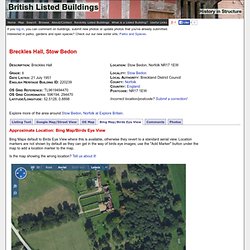 Approximate Location: Bing Map/Birds Eye View Bing Maps default to Birds Eye View where this is available, otherwise they revert to a standard aerial view. Breckles Hall - Stow Bedon - Norfolk - England. Norwich In Bloom - Floral Displays for the City of Norwich. And Norfolk Crocosmia Heritage Terry Bane, Bradley Simmonds and The Friends of Norwich in Bloom started to develop the Norfolk Heritage Crocosmia collection in 2003 when David and Colleen Fenwick from Plymouth visited Norwich to donate corms and help plant up the Noverre garden at The Assembly House with volunteers. 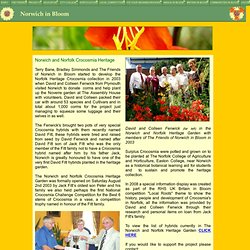 David and Colleen packed their car with around 53 species and Cultivars and in total about 1,000 corms for the project just managing to squeeze some luggage and their selves in as well. The Fenwick's brought two pots of very special Crocosmia hybrids with them recently named David Fitt, these hybrids were bred and raised from seed by David Fenwick and named after David Fitt son of Jack Fitt who was the only member of the Fitt family not to have a Crocosmia hybrid named after him by his father Jack, Norwich is greatly honoured to have one of the very first David Fitt hybrids planted in the heritage garden.

If you would like to support the project please contact: Terry Bane St. Norwich In Bloom - Floral Displays for the City of Norwich. Crocosmia Norwich "Local Roots" Heritage As part of the 2008 Britain in Bloom "Local Roots" theme Norwich entered the Norwich and Norfolk Crocosmia Heritage Garden project, Terry Bane put together a special information display from information researched and provided by David and Colleen Fenwick and personal items on loan from Jack Fitt's family showing the history and people involved with the development of Norwich and Norfolk Crocosmia hybrids. 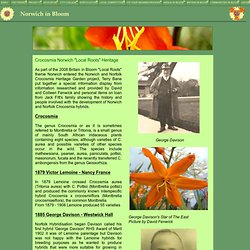 Crocosmia The genus Crocosmia or as it is sometimes referred to Montbretia or Tritonia, is a small genus of mainly South African iridaceous plants containing eight species; although varieties of C. aurea and possible varieties of other species occur in the wild. Breccles Hall and Horticulture. Breccles Hall has a five hectar estate and a long horticultural history. 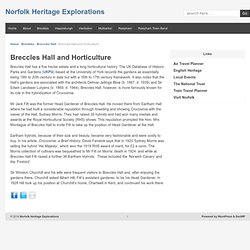 The UK Database of Historic Parks and Gardens (UKPG) based at the University of York records the gardens as essentially being 19th to 20th century in date but with a 16th to 17th century framework. It also notes that the Hall’s gardens are associated with the architects Detmar Jellings Blow (b. 1867, d. 1939) and Sir Edwin Landseer Lutyens (b. 1869, d. 1944). Crocosmia.

They can be evergreen or deciduous perennials that grow from basal underground corms. 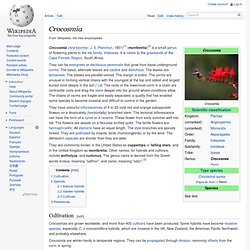 The basal, alternate leaves are cauline and distichous. The leaves are lanceolate. The blades are parallel-veined. The margin is entire. William Lygon, 7th Earl Beauchamp. Background and education[edit] Early career[edit] Beauchamp succeeded his father in the earldom in 1891 at the age of 18, and was mayor of Worcester between 1895 and 1896.[1] A progressive in his ideas, he was surprised to be offered the post of Governor of New South Wales in May 1899. 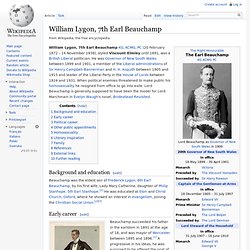 Though he was good at the job, and enjoyed the company of local artists and writers, he was unpopular in the colony due to a series of gaffes and misunderstandings, most notably over his reference to the 'birthstain' of Australia's convict origins.[2] His open association with the high church and Anglo-Catholicism caused increased perturbation in the Evangelical Council.[2] In Sydney, William Carr Smith, rector of St James' Church was his chaplain.[4] Beauchamp returned to Britain in 1900, saying that his duties had failed to stimulate him. Political career[edit] Other public appointments[edit] Admiralty House, London. Admiralty House in London is a Grade I listed[2] building facing Whitehall, currently used for UK government functions and as ministerial flats.

Grillion's. The first fifty years of the Grillion's Club is recorded in the book Grillion's Club: From Its Origin In 1812 To Its Fiftieth Anniversary, written quoting many of the club's records by Sir Philip De Malpas Grey Egerton. The book was privately printed at the Chiswick Press in 1880. In the 19th and early 20th centuries, many leading statesmen belonged to the club, including prime ministers Gladstone, Salisbury, Balfour, Asquith, and Baldwin.[1] ^ Jump up to: a b H.H. Asquith (1928). Memories and Reflections. pp. 262–274. Lady Ottoline Morrell. Early life[edit] Born Ottoline Violet Anne Cavendish-Bentinck, she was the daughter of Lieutenant-General Arthur Cavendish-Bentinck (son of Lord and Lady Charles Bentinck) and his second wife, the former Augusta Browne, later created Baroness Bolsover.

Lady Ottoline's great-great-uncle (through her paternal grandmother, Lady Anne Wellesley) was Arthur Wellesley, 1st Duke of Wellington. Janus: Papers of Edwin Samuel Montagu (1879-1924), politician, and related papers, Part 2. Edwin Samuel Montagu (1879-1924) reached the pinnacle of his political career as Secretary of State for India, a position he held from 1917 to 1922, and is best known for his contribution to the cause of constitutional reform in that country. However, since the publication of letters revealing the affair between H. H. Asquith and Venetia Stanley, Montagu's own relationship with Venetia-whom he married in 1915-has also become the subject of some interest.