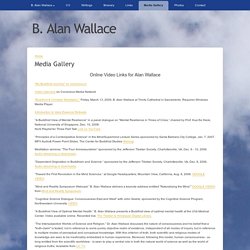 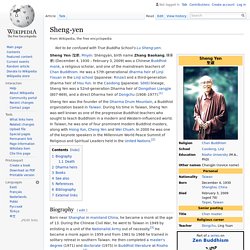 Kagyu Ling, the first Buddhist centre to be founded in Manchester, was established in 1975 by Karma Thinley Rinpoche and Lama Jampa Thaye. 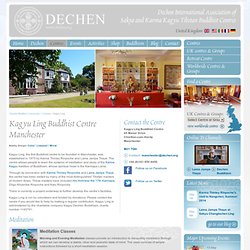 The centre allows people to learn the systems of meditation and study of the Karma Kagyu tradition of Buddhism, whose spiritual head is the Karmapa Lama. Through its connection with Karma Thinley Rinpoche and Lama Jampa Thaye , the centre has been visited by many of the most distinguished Tibetan masters of modern times. These masters have included His Holiness the 17th Karmapa, Dilgo Khyentse Rinpoche and Kalu Rinpoche. There is currently a project underway to further develop the centre’s facilities. Kagyu Ling is run by volunteers and funded by donations. Meditation Meditation Classes Morning and Evening Meditation classes provide an introduction to tranquillity meditation through which we can develop a stable, clear and peaceful state of mind.

Saturday and Wednesday morning classes provide an introduction to Buddhist teachings as well as meditation. Lama Jampa Thaye. Lama Jampa Thaye is a teacher of the Sakya and Karma Kagyu traditions of Tibetan Buddhism. 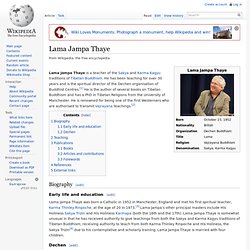 He has been teaching for over 30 years and is the spiritual director of the Dechen organisation of Buddhist Centres.[1] He is the author of several books on Tibetan Buddhism and has a PhD in Tibetan Religions from the University of Manchester. He is renowned for being one of the first Westerners who are authorised to transmit Vajrayana teachings.[2] Samye Ling Home Study Programme - Tibetan Buddhism distance learning. The Berzin Archives – The Buddhist Archives of Dr. Alexander Berzin – Home Page. Shambhala Training. John Myrdhin Reynolds / Vajranatha.

About Ajahn Chah - Biography. For more detailed information, have a look at the video-series of the Life of Ajahn Chah. 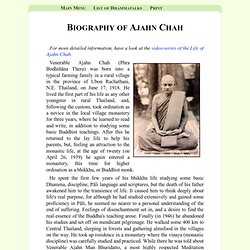 Venerable Ajahn Chah (Phra Bodhiñāna Thera) was born into a typical farming family in a rural village in the province of Ubon Rachathani, N.E. The_teachings_of_ajahn_chah_web. Pema Chödrön. Lama Yeshe Wisdom Archive. Chögyam Trungpa. Thubten Yeshe. Thubten Yeshe (1935–1984) was a Tibetan lama who, while exiled in Nepal, co-founded Kopan Monastery (1969) and the Foundation for the Preservation of the Mahayana Tradition (1975). 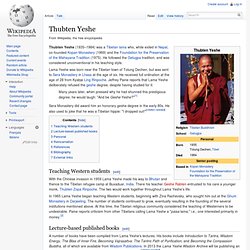 He followed the Gelugpa tradition, and was considered unconventional in his teaching style. Lama Yeshe was born near the Tibetan town of Tolung Dechen, but was sent to Sera Monastery in Lhasa at the age of six. He received full ordination at the age of 28 from Kyabje Ling Rinpoche. Jeffrey Paine reports that Lama Yeshe deliberately refused the geshe degree, despite having studied for it: Many years later, when pressed why he had shunned this prestigious degree, he would laugh: "And be Geshe Yeshe? " Sera Monastery did award him an honorary geshe degree in the early 80s. Teaching Western students[edit] With the Chinese invasion in 1959 Lama Yeshe made his way to Bhutan and thence to the Tibetan refugee camp at Buxaduar, India. 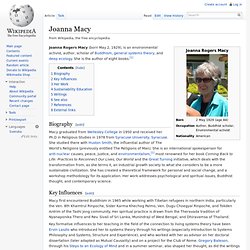 She is the author of eight books.[1] Biography[edit] Macy graduated from Wellesley College in 1950 and received her Ph.D in Religious Studies in 1978 from Syracuse University, Syracuse. She studied there with Huston Smith, the influential author of The World's Religions (previously entitled The Religions of Man). She is an international spokesperson for anti-nuclear causes, peace, justice, and environmentalism,[1] most renowned for her book Coming Back to Life: Practices to Reconnect Our Lives, Our World and the Great Turning initiative, which deals with the transformation from, as she terms it, an industrial growth society to what she considers to be a more sustainable civilization. Key Influences[edit] Her Work[edit] Sustainability Education[edit] Joanna Macy is one of the world’s leading sustainability educators. Business as usual.