The Day You Discard Your Body, by Marshall Brain. Stop for a moment and think about your favorite science fiction stories. 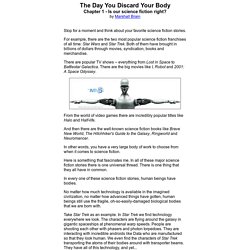 For example, there are the two most popular science fiction franchises of all time: Star Wars and Star Trek. Both of them have brought in billions of dollars through movies, syndication, books and merchandise. There are popular TV shows -- everything from Lost in Space to Battlestar Galactica. There are the big movies like I, Robot and 2001: A Space Odyssey. This Zero-Energy Home Is Run By Machines And Costs A Lot Less Than A Regular House. A net-zero house—one that creates as much energy as it uses—is usually a pricey custom design. 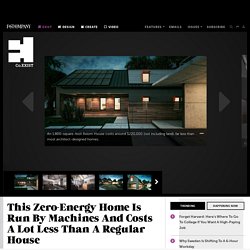 The cost is one reason that there are only around 600 of the homes in the U.S. today. But a new startup wants to make a house with no energy bills as cheap as buying a standard power-sucking McMansion. The Axiom House is ultra-efficient, runs on renewable power, and smart: Robots handle everything from lighting and security to mowing the lawn. Ukrainian startup: We’ve solved long-range wireless charging. Wireless chargers using standards like Qi have been on the market for a while; IKEA even includes them in some of its furniture these days. 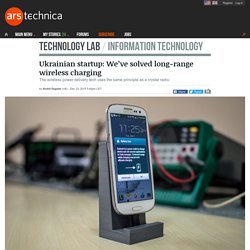 Opec faces a mortal threat from electric cars. Global demand for crude oil will rise by 18m barrels a day (b/d) to 110m by 2040. 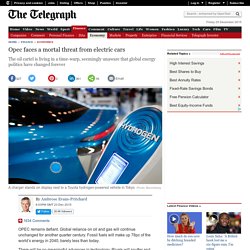 The cartel has shaved its long-term forecast slightly by 1m b/d, but this is in part due to weaker economic growth. ARM charts out the path to printed plastic chips - SemiAccurate. Techcon 2015: 6-inch M0 SoCs sans silicon ARM showed off a unique M0 cored SoC at Techcon, it was a plastic chip. 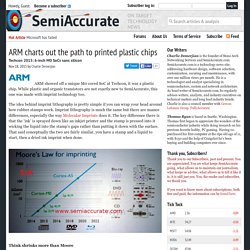 While plastic and organic transistors are not exactly new to SemiAccurate, this one was made with imprint technology too. The idea behind imprint lithography is pretty simple if you can wrap your head around how rubber stamps work. The coming era of unlimited — and free — clean energy. Solar energy is ready for primetime. 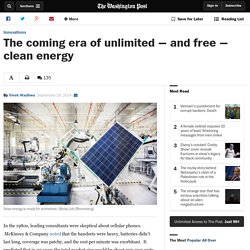 IoT Devices: Sensors with no battery invented by researcher. Researchers at the Eindhoven University of Technology in Eindhoven, Netherlands have created the world’s smallest temperature sensor chip, but its size isn’t even the most impressive thing about it. 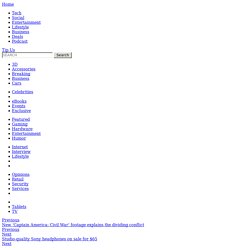 The remarkable new temperature sensor is able to draw power from radio waves being broadcast by the same wireless network it uses to communicate. As a result, the chip doesn’t need a battery and never needs to be charged, representing a major leap forward for the Internet of Things and for electronics in general. New startup aims to transfer people's consciousness into artificial bodies so they can live forever. As advancements in technology continue at an ever-increasing pace, will there ever come a day when we’ll be able to use science to cheat death? 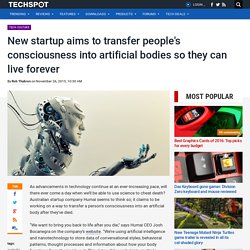 Australian startup company Humai seems to think so; it claims to be working on a way to transfer a person’s consciousness into an artificial body after they’ve died. “We want to bring you back to life after you die,” says Humai CEO Josh Bocanegra on the company’s website. “We’re using artificial intelligence and nanotechnology to store data of conversational styles, behavioral patterns, thought processes and information about how your body functions from the inside-out. This data will be coded into multiple sensor technologies, which will be built into an artificial body with the brain of a deceased human. Using cloning technology, we will restore the brain as it matures.” “The artificial body functions will be controlled with your thoughts by measuring brain waves.

Li-Fi has just been tested in the real world, and it's 100 times faster than Wi-Fi. Expect to hear a whole lot more about Li-Fi - a wireless technology that transmits high-speed data using visible light communication (VLC) - in the coming months. 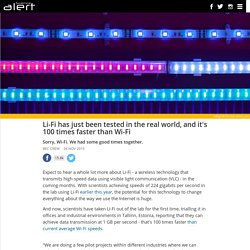 With scientists achieving speeds of 224 gigabits per second in the lab using Li-Fi earlier this year, the potential for this technology to change everything about the way we use the Internet is huge. And now, scientists have taken Li-Fi out of the lab for the first time, trialling it in offices and industrial environments in Tallinn, Estonia, reporting that they can achieve data transmission at 1 GB per second - that's 100 times faster than current average Wi-Fi speeds. Fairphone 2 hands-on: Modular phones are finally here. AMSTERDAM—With more and more similarly priced and specced Android smartphones arriving on the market, unique selling points are becoming increasingly rare. 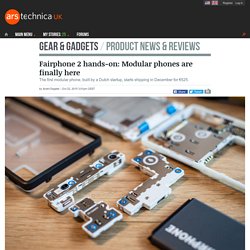 Samsung is developing robots to replace cheap Chinese labour. The South Korean government has handed Samsung a multi-million dollar investment to develop factory robots that can carry out complex tasks normally reserved for nimble human fingers. The country's Ministry of Trade, Industry and Energy said the $16.75 billion won ($14.8m, £9.57m) investment would help manufacturers compete with cheap labour in China. According to the Yonha News Agency, Samsung will be tasked with developing high-precision robots that are currently expensive and often imported from abroad. The ministry expects work to be completed by late 2018. Samsung will build precision speed reducers, motors, controllers and sensor encoders. The plan, the ministry said, was for South Korean robots to pick up work normally done by low-wage Chinese workers. The robots will eventually be put to work making products such as mobile phones and other consumer electronics that require the level of precision often only possible with human hands.

The Internet's Dark Ages. The web, as it appears at any one moment, is a phantasmagoria. It’s not a place in any reliable sense of the word. 55-inch rollable TV prototype to be unveiled by LG. Imagine going into some consumer electronics retailer, asking the employee there to roll you one TV. Australian engineers have had a huge breakthrough that could lead to a new generation of super-fast computers.

Humankind is hot on the trail to designing and building the next-generation of super computers, called quantum computers. Capable of easily cracking encryptions that would be impossible with the average classical computer, a quantum computer will not only revolutionise computing speed but also render most common-day encryption methods obsolete. Now, a team of scientists at the The University of New South Wales (UNSW) in Sydney, Australia and Keio University in Japan have just made a significant breakthrough in the field using a special material: silicon. By modifying a standard silicon transistor — the backbone of all modern-day electronic devices — the scientists have performed the world’s first calculation with what are called quantum bits, instead of classical bits, with a silicon-based material. Quantum bits are the coded language by which quantum computers would speak to one another and transmit and store information.

Archos introduces PicoWAN, a low cost, collaborative & low power network. With a strong growth of 30% in its third quarter and a turnover of 103,8 M€ until now (24% increase from last year), Archos’ future looks promising. The company has just announced the launch of its new product, PicoWAN, whose aim is to become the first LP-WAN ( Low Power- Wide Area Network) RF network for connected objects, which will be global, collaborative and at a very low price. As Henri Crohas, founder of Archos, currently chairman of its board of directors and the man behind the creation of PicoWan, explains in the video below, the secret to its innovation are the pico-gateways.

The pico-gateways, which come in the form of smart plugs connected to the internet via WiFi or Ethernet, can be placed, with very low cost and easy installation, inside buildings, creating a unique wireless communication network that can be densified at will and made fail-safe and resulting in a much higher Quality of Service. Soon Countries Won’t Compete for Cheap Labor—But Robotics.

Uk.businessinsider. In my last article for IBTimes UK I spoke about how EMP (electromagnetic pulse) generators could destroy America, or any country, in fact. As a result, I suggested that President Obama's recent declaration on gun control was ridiculous. President Obama puts his finger on the real danger of robots.

Yesterday, in one of his first attempts at selling the just-completed Trans-Pacific Partnership, President Obama made a statement about what's actually ailing the American worker. IBM Scientists Find New Way to Shrink Transistors. Photo. Photonic Memory Vs SSD: New light-based chip 100 times faster than SSD. Computers are only as fast as their components, and one key component is about to get a serious shot of adrenaline. Solid-state drives marked a huge step forward in device memory, capable of reading and writing data at speeds far greater than any disc-based hard drive.

How a Microscopic Supercapacitor Will Supercharge Mobile Electronics. Smaller, Faster, Cheaper, Over: The Future of Computer Chips. Photo. Light-based memory chip is first to permanently store data. Today’s electronic computer chips work at blazing speeds. 3D Computer Chips Could Be 1,000 Times Faster Than Existing Ones. ST. LOUIS — A new method of designing and building computer chips could lead to blisteringly quick processing at least 1,000 times faster than the best existing chips are capable of, researchers say.

The new method, which relies on materials called carbon nanotubes, allows scientists to build the chip in three dimensions. GCR - News - SAM the bricklaying robot could be yours for $500,000. Autonomous ships and underwater vessels will rule the seas by 2030. Artificial Intelligence Can Now Paint Like Art's Greatest Masters. HAMR HDD capacities to scale from 4TB in 2016 to 100TB in 2025 - Storage. Georgia Tech's AI is a choose-your-own adventure author. Printable solar cells from Australia are about to hit the market. Terahertz breakthrough opens pathway for 100x faster Wi-Fi. Robots are going to steal the jobs of chefs, salespeople and models, researchers say as they unveil full list of likely robot professions - News - Gadgets and Tech.