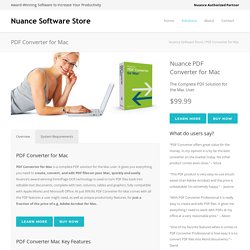 “PDF Converter offers great value for the money. In my opinion it is by far the best converter on the market today. No other product comes even close.” – Vince “This PDF product is very easy-to-use (much easier than Adobe Acrobat) and the price is unbeatable! I’m extremely happy.” – Joanne. Competitions – ICDAR2019. Adlib Enterprise Software for Content Standardization and Classification. Index:Bibelöversättningarna av år 1536 band I - Wikisource. TRAIN YOUR TESSERACT – A FREE FONT TRAINING TOOL. As a developer working with Tesseract you know the struggle: Training a font file for Tesseract takes time and effort. 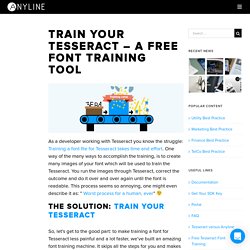 One way of the many ways to accomplish the training, is to create many images of your font which will be used to train the Tesseract. You run the images through Tesseract, correct the outcome and do it over and over again until the font is readable. This process seems so annoying, one might even describe it as: “ Worst process for a human, ever” So, let’s get to the good part: to make training a font for Tesseract less painful and a lot faster, we’ve built an amazing font training machine. A HTML GUI for training Tesseract on character sets - danwin.com. OCRmyPDF/README.rst at master · jbarlow83/OCRmyPDF. Best OCR Software For Mac. The following is our guide to the best OCR software for Mac users. 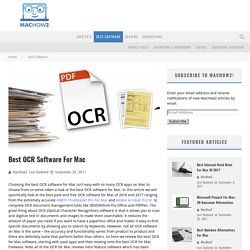 Although there is quite a lot of OCR software for Mac, there are four which we’ve found consistently deliver excellent results. Note that these OCR apps are listed in order of overall OCR performance accuracy, speed and ease of use from best to worst. We’ll now take a closer look at them all but we’ll also review other OCR software which doesn’t perform quite as well, but is still worth considering especially if you’re on a budget. If you don’t want to read the reviews, there’s also a comparison table which you can jump to directly using the Table of Contents above or by scrolling down the page. Free Online Swedish OCR. Gutcheck. Latin OCR. What is the point of an online interactive OCR text editor? The Digitization Project of Kindred Languages is not only about the publishing Fenno-Ugric material online,but it also aims to support the linguistic research by developing purposeful tools for its help. 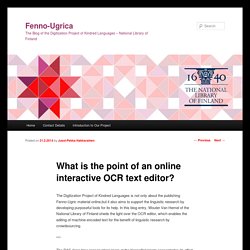 In this blog entry, Wouter Van Hemel of the National Library of Finland sheds the light over the OCR editor, which enables the editing of machine-encoded text for the benefit of linguistic research by crowdsourcing. The PAS (long-time preservation) team at the Kansalliskirjasto concentrates its effort on the digital preservation of valuable historical and cultural materials so that while the physical form of works might deteriorate and even disappear over time, the information therein can live on forever in the digital realm, accessible to all. With the OCRUI editor, the Kansalliskirjasto wants to extend this approach to the correction process of OCR material. The ALTO format The OCRUI application is in essence an editor for these ALTO XML files. 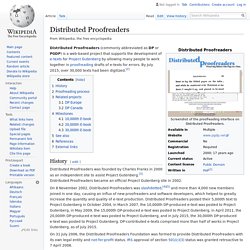 Proofreading process[edit] Public domain works, typically books with expired copyright, are scanned by volunteers or sourced from digitization projects and the images are run through optical character recognition (OCR) software. DP Europe[edit] How to Edit A PDF in Word on Mac (Yosemite Included) - Cisdem. A PDF file is a type of file that is designed to be viewable on any computer. 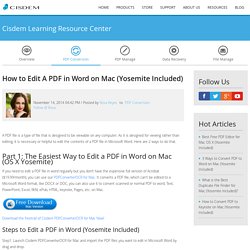 As it is designed for viewing rather than editing, it is necessary or helpful to edit the contents of a PDF file in Microsoft Word. Here are 2 ways to do that. Part 1: The Easiest Way to Edit a PDF in Word on Mac (OS X Yosemite) If you need to edit a PDF file in word regularly but you don’t have the expensive full version of Acrobat ($19.99/month), you can use our PDFConverterOCR for Mac.

It converts a PDF file, which can't be edited to a Microsoft Word format, like DOCX or DOC, you can also use it to convert scanned or normal PDF to word, Text, PowerPoint, Excel, Rtfd, ePub, HTML, keynote, Pages, etc. on Mac. Download the freetrail of Cisdem PDFConverterOCR for Mac Now! [OFFICIAL] Cisdem PDFConverterOCR for Mac: Convert Native and Scanned PDFs on Mac.