Board gender diversity closer to AICD target. The Power of Flexibility: A Key Enabler to Boost Gender Parity and Employee Engagement. Flexible workplaces are becoming the norm. 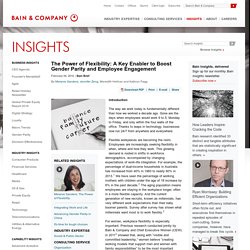 Employees are increasingly seeking flexibility in when, where and how they work. This growing demand is rooted in shifts in workforce demographics, accompanied by changing expectations of work-life integration. Workplace flexibility, working parents and fixing the gender pay gap. Not only is workplace flexibility for BOTH parents good for everyone involved, most men actually want it! 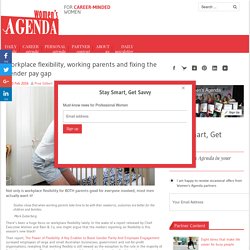 Studies show that when working parents take time to be with their newborns, outcomes are better for the children and families. Mark Zuckerberg There’s been a huge focus on workplace flexibility lately. In the wake of a report released by Chief Executive Women and Bain & Co, one might argue that the media's reporting on flexibility is this season's new black! Maternity leave and the problem with returning to work. Last night I caught up for a drink with a girlfriend, Sally (not her real name), who has recently returned to work for her employer of 11 years, in a part-time capacity, after having her second baby. 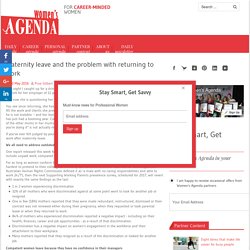 And now she is questioning her worth. You see since returning, she has a new boss, new team members, and is the only part-timer in the team. All the work and clients she previously managed are going to a colleague 13 years her junior -- because he is not invisible -- and her bonus was halved with no explanation as to why, even though the company has just had a booming year. Combine that with the fact that she's returned to work earlier than many of the other mums in her mums group, and she's realising that the comment "I just don't know how you're doing it" is not actually meant as a compliment.

FAQs - Grace Papers. Features - Grace Papers. More #Girlbosses please: How you can help shift gendered expectations at work. The ultimate efficiency hack: Have kids (we're serious) Women with children outperform those who don't have children over a 30-year career research shows — Quartz. On the TV show Westworld, when the character of William arrives, he’s thrust into a lawless environment loosely based on the old American West where people live out their deepest, darkest, and most depraved fantasies with robotic “hosts.” 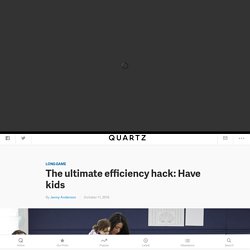 Such an experience does not come cheap in the HBO show. Early on, William’s friend mentions in passing that they are each paying a cool $40,000 a day for their once-in-a-lifetime trips. In fact, that’s just the base rate. HBO had some fun promoting the series with an impressive website called Discover Westworld, where guests could book trips to the fictional park. (The terms and conditions state that you’re not allowed to sue if you die from autoerotic asphyxiation—or the hosts attacking you.) The secret to Patagonia’s success? Keeping moms and onsite child care and paid parental leave — Quartz. When Phil Graves, a father of three young girls, worked for Deloitte, his days looked a lot like those of many working professionals. 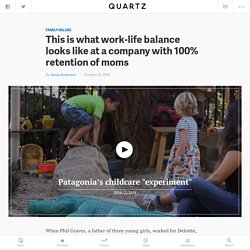 He left before the kids were up to commute to work in San Francisco. He raced through his day, and dashed home to make the bedtime crush: bath, bedtime stories, a few sweet snuggles before lights out for the kids, dinner with his wife and a flurry of emails before bed. “All my quality time with my daughters was on weekends,” he said.

And that was a good version of what most working parents in the US experience. Deloitte has some of the most family-friendly benefits in corporate America.