A user chooses when and where to exit a database narrative; where a user enters, as with most narratives, is usually through a designed portal. 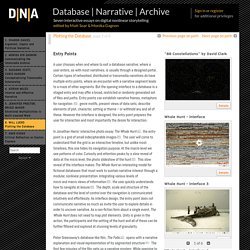 Certain types of networked, distributed or transmedia narratives do have multiple entry points, where an encounter with a narrative segment leads to a maze of other segments. But the opening interface to a database is a staged entry and may offer a broad, restricted or randomly generated set of files and paths. Entry points can establish narrative frames, metaphors for navigation , genre motifs, present views of data sets, describe elements of plot, character, setting or theme – or withhold any and all of these.

However the interface is designed, the entry point prepares the user for interaction and most importantly the desire for interaction. In Jonathan Harris’ interactive photo essay The Whale Hunt, the entry point is a grid of small indecipherable images. 88 Constellations Preview. The Language of New Media. “The Language of New Media, Manovich surpasses previous prophets of the new media by uncovering the way that what is new is often rooted in a transformation and rediscovery of the slumbering utopian energies of the past. 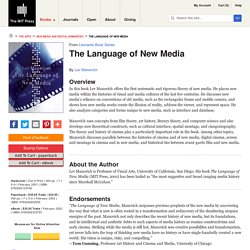 Manovich not only describes the recent history of new media, but its foundations, and its intellectual and aesthetic debts to such aspects of media history as russian constructivism and early cinema. Striking while the media is still hot, Manovich sees creative possibilites and transformation, yet never falls into the trap of thinking new media have no history or have single-handedly created a new world. What is Database (DB)? Webopedia Definition. Main » TERM » D » By Vangie Beal. 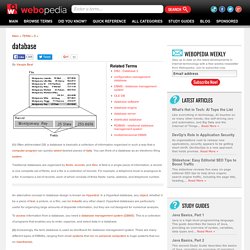 Η βάση δεδομένων .... το τέλος της αφήγησης; Teaching Twitter: The History of the Present. "140 characters is a novel when you’re being shot at. 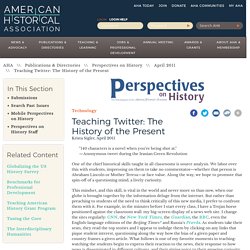 "—Anonymous tweet during the Iranian Green Revolution One of the chief historical skills taught in all classrooms is source analysis. We labor over this with students, impressing on them to take no commentator—whether that person is Abraham Lincoln or Mother Teresa—at face value. Η λογική - αισθητική της βάσης δεδομένων. Οι χωρικές σχέσεις παίρνουν τη θέση των χρονικών διαβάσεων. 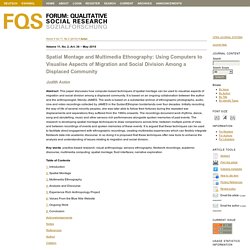 It is based on an ongoing collaboration between the author and the anthropologist, Wendy JAMES. The work is based on a substantial archive of ethnographic photographs, audio, cine and video recordings collected by JAMES in the Sudan/Ethiopian borderlands over four decades. Key words: practice-based research; visual anthropology; sensory ethnography; fieldwork recordings; academic discourse; multimedia computing; spatial montage; fluid interfaces; narrative exploration Table of Contents 1. 2. 3. 4. 5. 6. Loop. 5consbar2_e0.gif (GIF Image, 574 × 51 pixels) Still / moving. Αλεπούδα on Twitter: "How to explain in one gif, why the loans never helped the Greek people... The Reaction GIF: Moving Image as Gesture. Organized by Jason Eppink, Associate Curator of Digital Media Computer-mediated communication increasingly informs the way we interact with friends and peers. 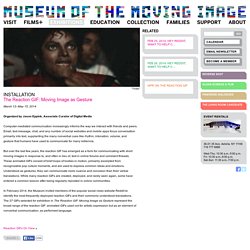 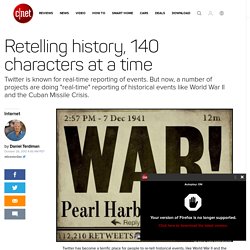 You're no doubt well aware of those ultimate outcomes, but what if you don't remember, or never knew, the myriad individual moments, big and small, that led to those famous conclusions? There are plenty of thick history books you could pick up, but maybe you're someone who wants a more dramatic sense of what happened -- even, perhaps, to feel like you're right in the thick of the drama. To be sure, there's no time machine that can take you back to London during The Blitz, or to the White House Situation Room as JFK stood firm against belligerent military leaders wanting to engage the Soviets over surreptitiously putting nukes in Cuba. But these days, in little 140-character snippets, many of those moments are being played out for the whole world to see.

And if you close your eyes, you can almost imagine you're there. Mashable. We're constantly amazed by how the communication of news has changed over the past decade alone. 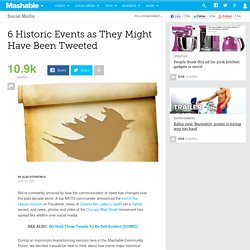 A top NATO commander announced the end of the Libyan mission on Facebook, news of Osama Bin Laden's death set a Twitter record, and news, photos and video of the Occupy Wall Street movement has spread like wildfire over social media. SEE ALSO: We Hold These Tweets To Be Self-Evident [COMIC] Trump Twitter Archive. Nanoism: a place for twitter-fiction. Paul Otlet, visioning a web in 1934. Untitled. Witness 360: 7/7 - virtual reality video.