Www.tompkinscountyny.gov. The Open Focus Brain: Breaking the Addiction to Narrow Focus. How memories form and how we lose them - Catharine Young. Memory: It isn’t just something, it's everything. 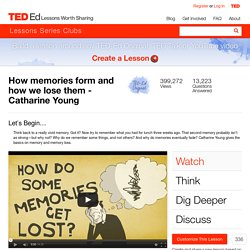 And although scientists have pursued and puzzled over it for centuries, a definitive explanation of the actual memory process still eludes us--partly because our brain is so incredibly complex (it is made up of approximately 90 billion cells after all!). Let’s take a look at the basic neuroanatomy elements, which makes memory possible. Brain cells, called neurons are the core component of the nervous system and have the remarkable ability to communicate with each other and transfer information. They are able to accomplish through a process called synaptic transmission. Neurons release specialized proteins called neurotransmitters that travel through the space connecting each other together called synapses, and bind to specific proteins called receptors.

In order for new memory formation to occur, information needs to undergo certain processes. Memory can go through several different stages before it stored long-term. Would you opt for a life with no pain? - Hayley Levitt and Bethany Rickwald. 3 tips to boost your confidence. Need greater understanding of the fixed and growth mindsets? 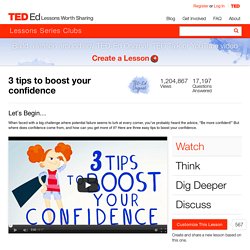 How stress affects your body - Sharon Horesh Bergquist. Let’s take a closer look at how the stress response works. 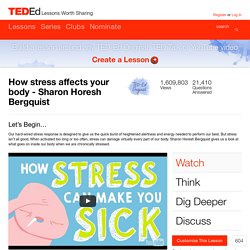 When your brain senses danger, your amygdala, the part of your brain that helps with emotional processing, sends an alarm signal to your hypothalamus. Acting as command central, your hypothalamus activates your sympathetic nervous system. This part of your autonomic nervous system leads to the release of adrenaline (also known as epinephrine) from your adrenal glands into your blood stream. All this happens in a split second. After adrenaline subsides, the second phase of your stress response kicks in. Detention or Eco Club: Choosing your future - Juan Martinez. Who was Confucius? - Bryan W. Van Norden. The philosopher Karl Jaspers said that Confucius, Jesus, Socrates, and the Buddha were similar in that each was an “axial figure” in one of the world’s great philosophical or religious traditions, yet we know almost no indisputable facts about any of them. 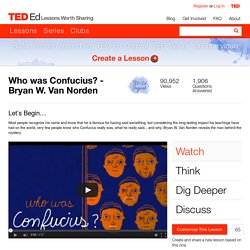 Consequently, almost everything about the life of Confucius (as with Jesus, Socrates, or the Buddha) is controversial. Most of the quotations you hear attributed to Confucius are made up. Consequently, if you want to know what Confucius actually said, read him yourself. One of the most influential translations of the Analects was by the Victorian-era missionary James Legge. You can read Legge’s translation alongside the original Chinese text online. Different ways of knowing - Daniel Tammet. 3 things I learned while my plane crashed - Ric Elias. What "Orwellian" really means - Noah Tavlin. Now you know what 'Orwellian' means. 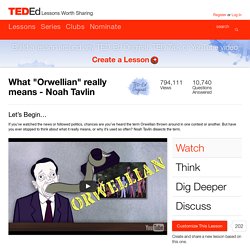 But do you really know? Check out this blog, "Do you really know what 'Orwellian' means? " from the Guardian. The NSA scandal has led many critics to call the U.S. government 'Orwellian.' On positive psychology - Martin Seligman. Seligman believes that there are three different types of happy lives: the pleasant life, the engaged life, and the meaningful life. 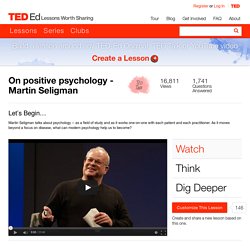 Create an infographic explaining the three lives. The infographic should include a spokesperson who seems to represent each type of life; this could be someone you know, celebrity, a historical figure, or a character from TV, movies, or literature. Try what Seligman calls the “Gratitude Visit” [16:53]. Keep a written journal or a video diary to record your feelings before and after the exercise.

The art of choosing - Sheena Iyengar. Iyengar offers Burger King and Starbucks advertising as evidence for her argument that “Americans tend to believe that they’ve reached some sort of pinnacle in the way they practice choice. 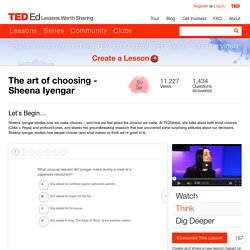 They think that choice, as seen through the American lens, best fulfills an innate and universal desire for choice in all humans.” Identify two or three other advertisements that embody these assumptions. Select one of the studies Iyengar describes in her talk and recreate it locally. Or design your own experiment exploring the promise and pitfalls of choice and recruit classmates and community members to participate. How people rationalize fraud - Kelly Richmond Pope. How false news can spread - Noah Tavlin. The term “circular reporting” likely originated in the government and military intelligence community, where ascertaining the validity of information is absolutely critical when there is misinformation intentionally being spread and leaked by one’s opposition. 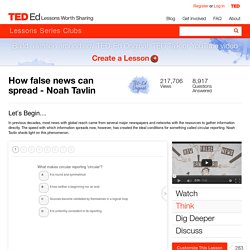 This paper goes into greater detail about how the military intelligence community deals with circular reporting. Sometimes, false information can spread so widely that it becomes accepted as true. For example, the Coati, a relative of the raccoon, native to Brazil, has become alternatively known as “the Brazilian Aardvark.” This blog post details ten of the biggest Wikipedia hoaxes to date. While Wikipedia has high-risk potential to be a source of misinformation—and has been such in the past—its community of editors has become more and more vigilant about catching un-cited or biased edits to pages before they are widely read. Why do we sometimes believe what we read or hear, even when we shouldn’t? The language of lying - Noah Zandan.