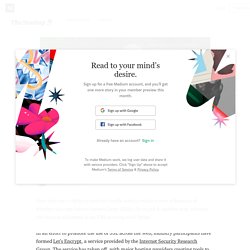 Your web site’s ability to rank in Google search results is now a function of whether you use Secure Sockets Layer (SSL). Or to put it another way, whether you have it addressed at an URL starting with “https”. In an effort to promote the use of SSL across the web, industry participants have formed Let’s Encrypt, a service provided by the Internet Security Research Group. The service has taken off, with major hosting providers creating tools to automatically create SSL certificates and install them on hosted sites. Sounds like an advance in cyber security, right? Uh…, maybe not? Cipher Strength, Key Management, and the “Threat Surface” The heart of encryption is the encrypting key. 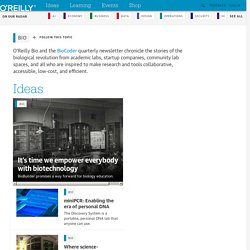 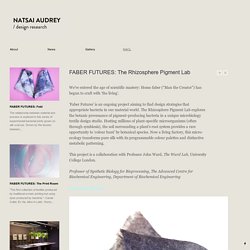 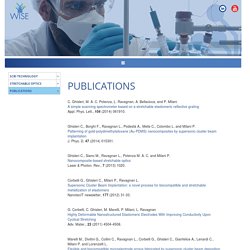 The electrically neutral nanoparticles are produced in the form of a supersonic beam and are shot at a high velocity toward the polymer base. Thanks to their inertia, the nanoparticles are implanted inside the polymer as bullets fired at a soft target, forming a conductive nanocomposite layer. WISE’s SCBI allows to produce electrodes that are strongly attached to the polymer and are stretchable, flexible, biocompatible and allow a very effective stimulation. 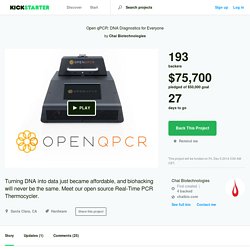 MiniPCR: A DNA Discovery System for Everyone by Zeke & Sebastian. We live in a DNA world. 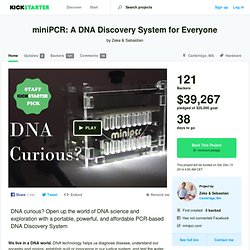 DNA technology helps us diagnose disease, understand our ancestry and origins, establish guilt or innocence in our justice system, and test the water and food we consume every day. Yet DNA technology is still a black box for most of us. OpenTrons: Open-Source Rapid Prototyping for Biology by OpenTrons. This is the OT.One liquid handling robot, the core of OpenTrons' rapid-prototyping platform for biotech. 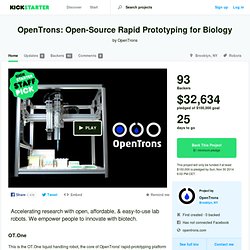 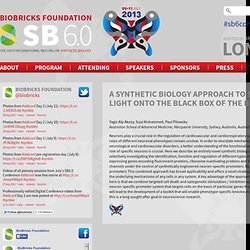 In order to elucidate mechanisms underlying many neurological and cardiovascular disorders, a better understanding of the functional and the physiological role of specific neurons is crucial. Here we describe an entirely novel synthetic biology approach for selectively investigating the identification, function and regulation of different types of neurons by expressing genes encoding fluorescent proteins, ribosome inactivating proteins and light-activated ion channels under the control of synthetically engineered neuron-specific promoters. Teams — Institute of Systems & Synthetic Biology. The MEGA team analyses how the topology of regulatory biological networks unfolds in time (dynamical studies) and space; this latter point being totally original. 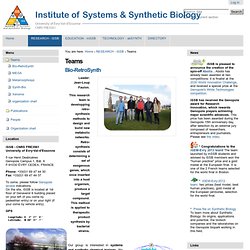 We also study links between transcription regulation and DNA replication and segregation, as well as the control of DNA replication by central carbon metabolism. On the topological level, three original methods have been developed: 1) detection of gene position regularities along chromosomes (Fig. 1); 2) numerical simulation of the folding of a chromosome bound to bi-valent clustering transcription factors (Fig. 2); 3) bioinformatics use of gene position and of gene promoter consensus sequences in order to predict transcriptional interaction maps. The results obtained change our view of nuclear functional organization, as well as of genome evolution and organization. Getting Ready for Synthetic Biology. Since the completion of the Human Genome Project in 2003, scientists have expanded their knowledge of how living cells work with new approaches including genomics, proteomics, and systems biology. 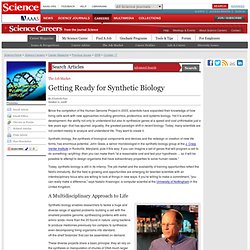 Yet it is another development--the ability not only to understand but also to synthesize genes at a speed and cost unthinkable just a few years ago--that has spurred, arguably, the greatest paradigm shift in recent biology: Today, many scientists are not content merely to analyze and understand life. They want to create it. Synthetic biology, the synthesis of biological components and devices and the redesign or creation of new life forms, has enormous potential. John Glass, a senior microbiologist in the synthetic biology group at the J.

Synthetic Biology. Biologie synthétique. The 15th International Conference on Systems Biology 2014. Lettre ouverte aux chercheurs en biologie synthétique. Anatomie d’une nouvelle révolution scientifique. Synthetic biology: promises and challenges. Synthetic biology: another buzzword? Life is evolving fast (at least in the first world) and the latest technological gadget becomes outdated even before we have learnt how to use it. In this respect, science is no exception. The new buzzword ‘Systems Biology’ entered the vocabulary of the scientific community only a few years ago. Now that every biologist is aware of it and almost everyone seems to be doing it, an even newer buzzword has entered the scientific arena, ‘Synthetic Biology’ (see as an example a sample of recent reviews on the topic, Benner and Sismour, 2005; Endy, 2005; Andrianantoandro et al, 2006; Heinemann and Panke, 2006).

Steal My Sunshine. Top row (l to r): Elysia chlorotica; spotted salamander adult; Lotharella globosa. Bottom row (l to r): diatom (Campylodiscus sp.); Paulinella chromatophora; diatom (Thalassiosira pseudonana). For credits, see end of article. Our world is swarming with symbioses. Sea anemones and clownfish, land plants and mycorrhizal fungi, rays and remora cleaner fish, corals and algae. Bionic Plants: Turning Plants Into Energy Producing Factories. A group of scientists from Massachusetts Institute of Technology (MIT) have developed a system aimed at increasing the energy yield of plants through the use of nanomaterials. Using a similar system, they also hope to be able to assign plants the novel function of chemical detection, which could be used to sense explosives amongst other things. Using HIV To Cut And Paste The Human Genome.

The virus that causes AIDS has been altered so that it can change the human genome in ways that could improve and extend the lives of people with a multiplicity of diseases - including HIV itself. Scientists have been conducting experiments on the use of viruses for gene therapy since the late 1990s. Natural selection has been honing the capacity of viruses to work their way into cells for millions of years. Scientists Make Progress In The Development Of A "One-Size-Fits-All" Artificial Blood. In a synthetic biology project dubbed HaemO2, researchers based at the University of Essex are developing a universal artificial blood substitute that, if successful, could potentially be given to any patient in need, regardless of blood type. Blood substitutes are desirable since the number of donors worldwide is steadily decreasing, meaning that hospitals are often in short supply of good quality blood for use during surgery or after trauma. In particular, individuals with rarer blood types often struggle to find donors, a problem which would be solved with a one-size-fits-all blood.

Furthermore, blood substitutes negate the need for screening for viral infections and therefore represent a clean, readily available supply of blood that would be especially useful after natural disasters. HaemO2, which is led by Professor Chris Cooper, aims to produce a safe and effective blood alternative using a hemoglobin-based oxygen carrier (HBOC).

Electric Bacteria Eat Electrons. Weekly Synbio Community Author Q&A: Drew Endy on Design for Life. Strange Bacteria Dine on Electricity and Link Up to Form Biowires. The Body’s Ecosystem. The human body is teeming with microbes—trillions of them. The commensal bacteria and fungi that live on and inside us outnumber our own cells 10-to-1, and the viruses that teem inside those cells and ours may add another order of magnitude. Injecting Bacteria Can Shrink Tumors. 5 Diseases You Should Be More Afraid Of Than Ebola. The current outbreak of Ebola virus disease (EVD) in West Africa is the largest in history, and has already killed over 1200 people. Those living in more developed areas have become fairly sheltered from the devastating effects of widespread infectious disease over the last 60 years or so, due to widespread availability of vaccines, competent healthcare, and education about hygiene’s role in disease transmission.

Ebola is particularly unlikely to cause a pandemic in the developed world, as the method of transmission requires close contact with infected people. However, that doesn’t mean that it’s completely impossible for diseases to become widespread in more developed areas. Check out these 5 diseases that could easily cause a global health emergency: Bioluminscent trees could light up our streets. Synthetic Biology Explained.

Are Your Bacteria Making You Fat? This Microbe's Hair is Actually a Nanowire for Powering Itself. The Gut Microbe That Protects Against Peanut Allergies. Scientists Create Simple Artificial ‘Cell’ Capable Of Spontaneous Movement. Hagfish Slime: Biomaterial Of The Future? Plant Engineered to Supercharge Photosynthesis with Hopes of Increasing Crop Yields.