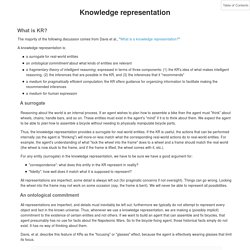 Thus, whenever we use a knowledge representation, we are making a (possibly implicit) commitment to the existence of certain entities and not others. If we want to build an agent that can assemble and fix bicycles, that agent presumably has no use for facts about the Napoleonic Wars. So to the bicycle-fixing agent, those historical facts simply do not exist. It has no way of thinking about them. Davis, et al. describe this feature of KRs as the "focusing" or "glasses" effect, because the agent is effectively wearing glasses that limit its focus. Epicurus fragments. Theory of fragments - Recherche Google.

Empedocles theory of fragments. Fragments by democritus. Development of the Atmoic Theory. Ancient Atomic Theory One of the first atomic theorists was Democritus, a Greek philosopher who lived in the fifth century BC. 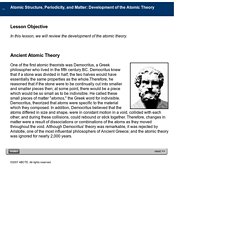 Democritus knew that if a stone was divided in half, the two halves would have essentially the same properties as the whole.Therefore, he reasoned that if the stone were to be continually cut into smaller and smaller pieces then; at some point, there would be a piece which would be so small as to be indivisible. He called these small pieces of matter "atomos," the Greek word for indivisible. Democritus, theorized that atoms were specific to the material which they composed. Development of the Atmoic Theory. Fragmentary theory aristotle. 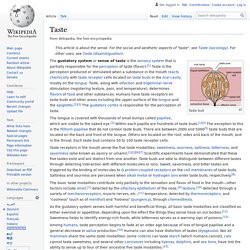 Taste is the sensation produced when a substance in the mouth reacts chemically with taste receptor cells located on taste buds in the oral cavity, mostly on the tongue. Taste, along with smell (olfaction) and trigeminal nerve stimulation (registering texture, pain, and temperature), determines flavors of food or other substances. Aristotle on taste. Smelling underwater - Recherche Google. Orgnan of man's eyes aristotle - Recherche Google. Man's eyes aristotle. Aristotle. Aristotle was born in Stagira in north Greece, the son of Nichomachus, the court physician to the Macedonian royal family. 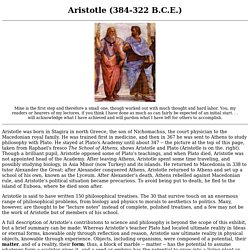 He was trained first in medicine, and then in 367 he was sent to Athens to study philosophy with Plato. Bloodless animals - Recherche Google. Plant perception (physiology) The leaf closing after touch in Mimosa pudica depends on electrical signals. 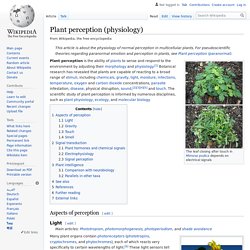 Vine tendril. Note how the plant reaches for and wraps around the galvanised wire provided for the purpose. This is a very tough twig and appears to have no other purpose than support for the plant. Nothing else grows from it. It must reach out softly, then wrap around and then dry and toughen. Plants systematically use hormonal signalling pathways to coordinate their own development and morphology. Plants have many strategies to fight off pests. Adaptive responses include: The sunflower, a common heliotropic plant which perceives and reacts to sunlight by slow turning movement. Do plants have sense perception - Recherche Google. Aristotle on smell ordus and inodorus tasteless. Our Five Senses on Sensors. Notes on Scent. 5. 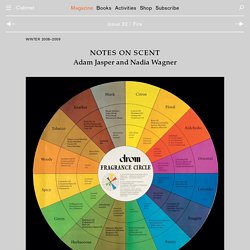 The olfactory bulb in humans is relatively small compared to, say, a white-eared opossum, a West European hedgehog, a polar bear, or a domestic dog, especially when taken in proportion to the size of the brain. Senses Aristotle: classical “five senses”: Sight Hearing Taste Smell Touch This is not all: what did Aristotle leave out? There are other somatosensory. 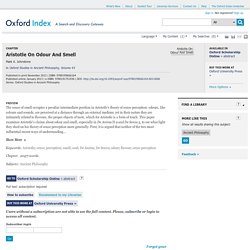 Subjects: Ancient Philosophy Go to Oxford Scholarship Online » abstract Full text: subscription required. Aristotle On Odour And Smell. DOI:10.1093/acprof:oso/9780199666164.003.0006 The sense of smell occupies a peculiar intermediate position in Aristotle's theory of sense perception: odours, like colours and sounds, are perceived at a distance through an external medium; yet in their nature they are intimately related to flavours, the proper objects of taste, which for Aristotle is a form of touch. 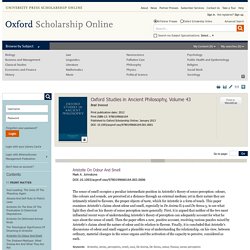 This paper examines Aristotle's claims about odour and smell, especially in De Anima II.9 and De Sensu 5, to see what light they shed on his theory of sense perception more generally. The sound fish make youtube. Rain Sound and Rainforest Animals Sound - Relaxing Sleep. Physicists observe weird quantum fluctuations of empty space—maybe. Empty space is anything but, according to quantum mechanics: Instead, it roils with quantum particles flitting in and out of existence. 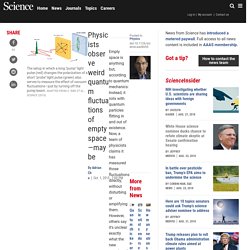 Now, a team of physicists claims it has measured those fluctuations directly, without disturbing or amplifying them. However, others say it's unclear exactly what the new experiment measures—which may be fitting for a phenomenon that originates in quantum mechanics' famous uncertainty principle. Van Allen Probes A: "Spooky Chorus" 2016-10-27. More than fifty ancient Greek inventions brought to life through incredible reconstructions. A new museum dedicated to the advanced technological inventions of ancient Greek scientist Archimedes, has just opened up in Ancient Olympia, Greece, according to a news announcement in the Greek Reporter . 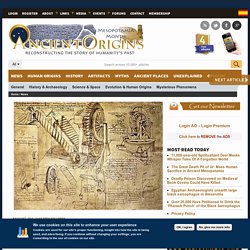 The ingenious wine-jug of Philon (the first «intelligent» appliance of domestic use in human history) Previous exhibit ﻿#10 #11 in the list of the 20 most popular exhibits #12 Next exhibit. Van allen belt radiation sound. The sound of the vacuum of space outside the earth. Ficheiro:Structure of the magnetosphere-en.svg. CancelEditDeletePreviewrevert Text of the note (may include Wiki markup) Could not save your note (edit conflict or other problem). Please copy the text in the edit box below and insert it manually by editing this page. Upon submitting the note will be published multi-licensed under the terms of the CC-BY-SA-3.0 license and of the GFDL, versions 1.2, 1.3, or any later version.

See our terms of use for more details. Add a noteDraw a rectangle onto the image above (press the left mouse button, then drag and release).This file has annotations. Save To modify annotations, your browser needs to have the XMLHttpRequest object. [[MediaWiki talk:Gadget-ImageAnnotator.js|Adding image note]]$1[[MediaWiki talk:Gadget-ImageAnnotator.js|Changing image note]]$1[[MediaWiki talk:Gadget-ImageAnnotator.js|Removing image note]]$1. Ancient greek vacuum - Recherche Google. Ancient greek vacuum - Recherche Google. Democritus. 1. Life and Works According to ancient reports, Democritus was born about 460 BCE (thus, he was a younger contemporary of Socrates) and was a citizen of Abdera, although some reports mention Miletus.

The vacuum aristotle sound. The vacuum the air as one continuous mass aristotle sound. Imperceptible definition. IMPERCEPTIBLES - Recherche Google. ARISTOTLE ON COLOUR, LIGHT AND IMPERCEPTIBLES1 - SORABJI - 2004 - Bulletin of the Institute of Classical Studies. PerceptionLecture. Aristotle on sound and perception. Aristotle on sound and air. [1604.08869] Einstein contra Aristotle: the sound from the heavens.

Aristotle on Sound and Hearing. Aristotle on Sounds: British Journal for the History of Philosophy: Vol 21, No 4. Aristotle on sound. History Of Colour - Colour Affects. Pythagoras, Aristotle, Plato « colorsystem. Aristotle's Doctrine of the Mean. Aristotle's Doctrine of the Mean (Originally appeared in History of Philosophy Quarterly 4/3, July 1987.) Ancient Atomism. 1. Atomism before Leucippus? Leucippus (5th c. BCE) is the earliest figure whose commitment to atomism is well attested. He is usually credited with inventing atomism.

According to a passing remark by the geographer Strabo, Posidonius (1st c.