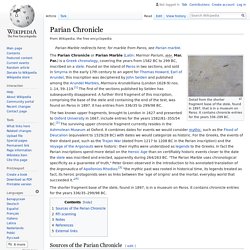 Detail from the shorter fragment base of the stele, found in 1897, that is in a museum on Paros. It contains chronicle entries for the years 336–299 BC. The Parian Chronicle or Parian Marble (Latin: Marmor Parium, abbr. Mar. Par.) is a Greek chronology, covering the years from 1582 BC to 299 BC, inscribed on a stele. The two known upper fragments, brought to London in 1627 and presented to Oxford University in 1667, include entries for the years 1582/81–355/54 BC.[2] The surviving upper chronicle fragment currently resides in the Ashmolean Museum at Oxford. 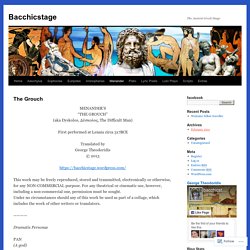 For any theatrical or cinematic use, however, including a non-commercial one, permission must be sought. Under no circumstances should any of this work be used as part of a collage, which includes the work of other writers or translators. Dramatis Personae PAN(A god) SOSTRATOS(The suitor. KALLIPPIDES(Sostratos’ father) GETAS(Kallippides’ slave) CHAEREAS(Sostratos’ friend) PYRRHIAS(Sostratos’ slave) KNEMON(A grouchy old farmer) MYRRHINE(Knemon’s daughter) GORGIAS(Myrrhine’s half-brother, Knemon’s son by another marriage) DAOS(Gorgias’ old slave) SICON(a cook) SIMIKE(Myrrhine’s Old Nurse) SOSTRATOS’ SISTER (Plangon) GORGIAS’ MOTHER (unnamed) Day. Enter Pan from the cave and addresses the audience Pan: Waves his hand over the set. Exit Pyrrhias. The Oxford Handbook of Greek and Roman Comedy. 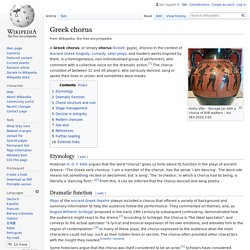 VEX.2010.3.65 A Greek chorus, or simply chorus (Greek: χορός, khoros) in the context of Ancient Greek tragedy, comedy, satyr plays, and modern works inspired by them, is a homogeneous, non-individualised group of performers, who comment with a collective voice on the dramatic action.[1] The chorus consisted of between 12 and 50 players, who variously danced, sang or spoke their lines in unison and sometimes wore masks. Etymology[edit] Historian H. D. Dramatic function[edit] Some historians argue that the chorus was itself considered to be an actor.[5] Scholars have considered Sophocles to be superior to Euripides in his choral writing. Menander. Ancient Athenian comic playwright Menander (; Greek: Μένανδρος Menandros; c. 342/41 – c. 290 BC) was a Greek dramatist and the best-known representative of Athenian New Comedy.[1] He wrote 108 comedies[2] and took the prize at the Lenaia festival eight times.[3] His record at the City Dionysia is unknown but may well have been similarly spectacular. 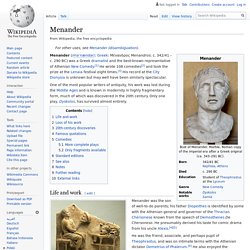 One of the most popular writers of antiquity, his work was lost during the Middle Ages and is known in modernity in highly fragmentary form, much of which was discovered in the 20th century. Only one play, Dyskolos, has survived almost entirely. Life and work[edit] How long complete copies of his plays survived is unclear, although 23 of them, with commentary by Michael Psellus, were said to still have been available in Constantinople in the 11th century. Dyskolos. Dyskolos (Greek: Δύσκολος, pronounced [dýskolos], translated as The Grouch, The Misanthrope, The Curmudgeon, The Bad-tempered Man or Old Cantankerous) is an Ancient Greek comedy by Menander, the only one of his plays, and of the whole New Comedy, that has survived in almost complete form.[1] It was first presented at the Lenaian festival in 317–16 BC, where it won Menander the first-place prize. 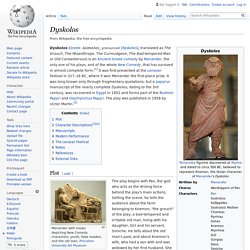 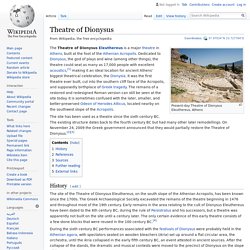 Dedicated to Dionysus, the god of plays and wine (among other things), the theatre could seat as many as 17,000 people with excellent acoustics,[1] making it an ideal location for ancient Athens' biggest theatrical celebration, the Dionysia. It was the first theatre ever built, cut into the southern cliff face of the Acropolis, and supposedly birthplace of Greek tragedy.

The remains of a restored and redesigned Roman version can still be seen at the site today.