Ask Ethan: Why Do Gravitational Waves Travel Exactly At The Speed Of Light? There are two fundamental classes of theories required to describe the entirety of the Universe. 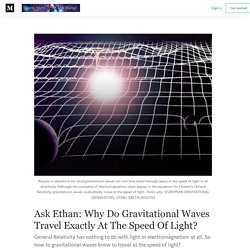 On the one hand, there’s quantum field theory, which describes electromagnetism and the nuclear forces, and accounts for all the particles in the Universe and the quantum interactions that govern them. On the other hand, there’s General Relativity, which explains the relationship between matter/energy and space/time, and describes what we experience as gravitation. Order hidden in disorder. Partitioning space into cells with optimum geometrical properties is a central challenge in many fields of science and technology. 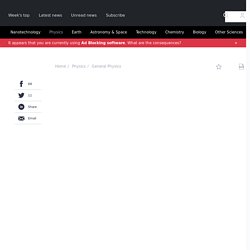 Researchers of Karlsruhe Institute of Technology (KIT) and colleagues from several countries have now found that in amorphous, i.e. disordered, systems, optimization of the individual cells gradually results in the same structure, although it remains amorphous. The disordered structure quickly converges to hyperuniformity, a hidden order on large scales. This is reported in Nature Communications. Science research often entails the search for an optimum foam or for a method to pack spheres as closely as possible.

The ideal tessellation of three-dimensional space has been studied for a long time by scientists. The theoretical work combines methods of stochastic geometry and statistical physics, and is now reported in Nature Communications. More information: Michael A. Sciencealert. "Survived Over 1/3 the Age of the Universe" (Weekend Feature) Posted on Mar 31, 2019 A gigantic “cold front” hurtling through the Perseus galaxy cluster spans about two million light years and has been traveling for over five billion years, over a third of the age of the universe, longer than the existence of our Solar System. 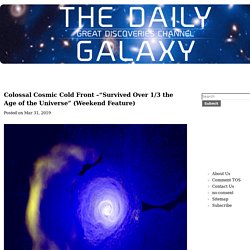 Astronomers expected that such an old cold front would have been blurred out or eroded over time because it has traveled for billions of years through a harsh environment of sound waves and turbulence caused by outbursts from the huge black hole at the center of Perseus. Sciencealert. Quantum optical cooling of nanoparticles. When a particle is completely isolated from its environment, the laws of quantum physics start to play a crucial role. 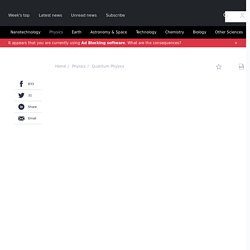 One important requirement to see quantum effects is to remove all thermal energy from the particle motion, i.e. to cool it as close as possible to absolute zero temperature. Researchers at the University of Vienna, the Austrian Academy of Sciences and the Massachusetts Institute of Technology (MIT) are now one step closer to reaching this goal by demonstrating a new method for cooling levitated nanoparticles. They now publish their results in the renowned journal Physical Review Letters. 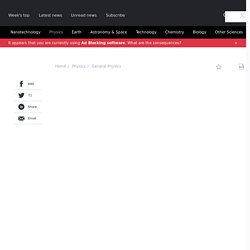 Their study, published on Physics Review Letters (PRL), investigated the dependency of different atomic transitions on the gravitational potential in order to give an upper limit on LPI violations. "General relativity and in general all metric theories of gravity are based on the equivalence of inertial mass and gravitational mass, formalized in the Einstein equivalence principle," Maryam Habibi, one of the researchers who carried out the study, told Phys.org. How to use gravitational waves to measure the expansion of the universe. On the morning of Aug. 17, 2017, after traveling for more than a hundred million years, the aftershocks from a massive collision in a galaxy far, far away finally reached Earth. 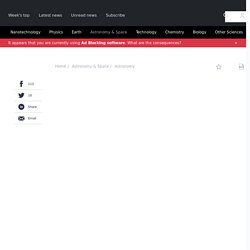 These ripples in the fabric of spacetime, called gravitational waves, tripped alarms at two ultra-sensitive detectors called LIGO, sending texts flying and scientists scrambling. Quantum optical cooling of nanoparticles. A Strange Signal from One of the Largest Objects in the Cosmos. Posted on Mar 30, 2019 “I couldn’t believe my eyes,” said Esra Bulbul of the Harvard Center for Astrophysics in July of 2014 of a still unfolding story about a strange signal that appeared not to come from any known type of matter detected in the x-ray spectrum in the Perseus Cluster –one of the most massive known objects in the universe. 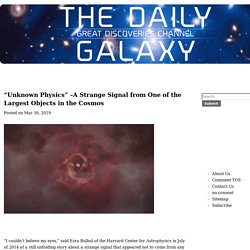 “What we found, at first glance, could not be explained by known physics.” Together with a team of more than a half-dozen colleagues, Bulbul used the Chandra X-Ray Observatory to explore the Perseus Cluster, a swarm of galaxies approximately 250 million light years from Earth. Imagine a cloud of gas in which each atom is a whole galaxy—that’s a bit what the Perseus cluster is like. Earth's gravitational wave detector LIGO is back online, now stronger. Physics Is Pointing Inexorably to Mind. In his 2014 book, Our Mathematical Universe, physicist Max Tegmark boldly claims that “protons, atoms, molecules, cells and stars” are all redundant “baggage.”

Only the mathematical apparatus used to describe the behavior of matter is supposedly real, not matter itself. For Tegmark, the universe is a “set of abstract entities with relations between them,” which “can be described in a baggage-independent way”—i.e., without matter. He attributes existence solely to descriptions, while incongruously denying the very thing that is described in the first place. Matter is done away with and only information itself is taken to be ultimately real. This abstract notion, called information realism is philosophical in character, but it has been associated with physics from its very inception. Indeed, according to information realists, matter arises from information processing, not the other way around. Sign up for Scientific American’s free newsletters. The Universe's Dark Secret: Where Did All the Antimatter Go? Paul M. 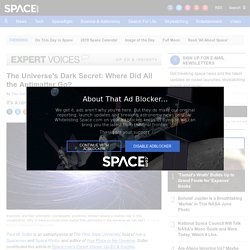 Sutter is an astrophysicist at The Ohio State University, host of Ask a Spaceman and Space Radio, and author of Your Place in the Universe. Sutter contributed this article to Space.com's Expert Voices: Op-Ed & Insights. So there's this stuff called "antimatter. " You may have heard of it. It's just like normal matter, with all the same properties and all the same abilities to make up atoms and molecules, except for one crucial difference: It has an opposite charge. Yahoo fait dÃ©sormais partie dâOath. 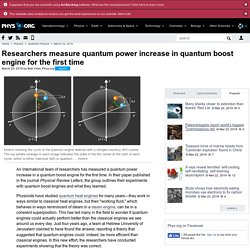 In their paper published in the journal Physical Review Letters, the group outlines their experiments with quantum boost engines and what they learned. Physicists have studied quantum heat engines for many years—they work in ways similar to classical heat engines, but their "working fluid," which behaves in ways reminiscent of steam in a steam engine, can be in a coherent superposition. This has led many in the field to wonder if quantum engines could actually perform better than the classical engines we see around us every day. Just four years ago, a team at Hebrew University of Jerusalem claimed to have found the answer, reporting a theory that suggested that quantum engines could, indeed, be more efficient than classical engines. Oldest Known Stars in the Galaxy Found in the Milky Way's Bulge. 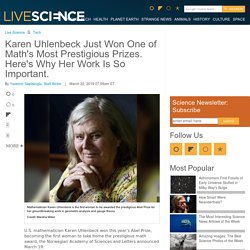 Uhlenbeck, an emeritus professor at the University of Texas at Austin and currently a visiting scholar at Princeton University, won for her "pioneering achievements in geometric partial differential equations, gauge theory and integrable systems, and for the fundamental impact of her work on analysis, geometry and mathematical physics," according to a statement from the academy, which awards the prize. [Female Firsts: 7 Women Who Broke Barriers in Science and Tech] "I can't think of anyone who deserves it more," said Penny Smith, a mathematician at Lehigh University in Pennsylvania, who has worked with Uhlenbeck and says she has become her best friend.

"She really is not just brilliant but creatively brilliant, amazingly creatively brilliant. " Here's how it goes. World's Largest Atom Smasher May Have Just Found Evidence for Why Our Universe Exists. For the first time ever, physicists at the world’s largest atom smasher have observed differences in the decay of particles and antiparticles containing a basic building block of matter, called the charm quark.

The finding could help explain the mystery of why matter exists at all. "It's a historic milestone," said Sheldon Stone, a professor of physics at Syracuse University and one of the collaborators on the new research. Every particle of matter has an antiparticle, which is identical in mass but with an opposite electrical charge. When matter and antimatter meet, they annihilate one another. That's a problem. Clearly, that didn't happen. The Quantum Theory that Connects the Entire Universe. Newscientist. Astronomers Have Detected 83 Black Holes in The Early Universe, Challenging Cosmology. Meditate with Mozart @ 432Hz Classical Piano.

528hz Pure Tone Transformation and Miracles (1HR) (HQ) Compassion Meditation. HOW IT WORKS: Orbital Mechanics. Welcome to the Super Hologram – The Simulated Super Hologram. Einstein's Genius: Describing the Geometry of Space-Time. Paul Sutter is an astrophysicist at The Ohio State University and the chief scientist at COSI science center. Sutter is also host of "Ask a Spaceman" and "Space Radio," and leads AstroTours around the world.

Sutter contributed this article to Space.com's Expert Voices: Op-Ed & Insights. Russell's paradox. You Are the Universe: Discovering Your Cosmic Self and Why It Matters - Deepak Chopra, Menas C. Kafatos, Ph.D. - Google Books. "There Is No Such Thing As Time" Hydrogen cobalt nyeon h co ne. Millikan electron. Ernest rutherford prove the structure of matter. Millikan quarks electric charge proton and neutron. Particle spin detector boareboareboare. Molecules atom. Electroweak force up youtube. Strong force color force quarks youtube. Why the Phi do all these planetary rotation ratios add to Fibonacci numbers? Sciency looking diagram we don’t know the meaning of because the site is in Chinese I’m confident that one day in the not too distant future we’ll look back at this post and wonder why we couldn’t see the obvious. But right now this is a total mystery. Oldbrew and I have been looking at the axial rotation ratios between neighbouring planets and planet pairs, with surprising results.

Right upfront, we need to point out that these ratios between rotation rates are dimensionless, as are the Fibonacci numbers they relate to. So this is not mere ‘numerology’, or playing with numbers based on a particular measurement scheme.