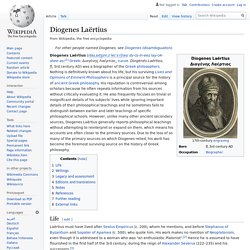 Diogénēs Laértios; fl. 3rd century AD) was a biographer of the Greek philosophers. Nothing is definitively known about his life, but his surviving Lives and Opinions of Eminent Philosophers is a principal source for the history of ancient Greek philosophy. His reputation is controversial among scholars because he often repeats information from his sources without critically evaluating it.

He also frequently focuses on trivial or insignificant details of his subjects' lives while ignoring important details of their philosophical teachings and he sometimes fails to distinguish between earlier and later teachings of specific philosophical schools. Life[edit] Laërtius must have lived after Sextus Empiricus (c. 200), whom he mentions, and before Stephanus of Byzantium and Sopater of Apamea (c. 500), who quote him.

Writings[edit] Notes[edit] Attribution: Helen of Troy. Helen, detail from an Attic red-figure krater, ca. 450–440 B.C.E., Louvre (G 424) In Greek mythology, Helen (in Greek, Ἑλένη – Helénē), better known as Helen of Sparta or Helen of Troy, was daughter of Zeus and Leda, wife of king Menelaus of Sparta and sister of Castor, Polydeuces and Clytemnestra. 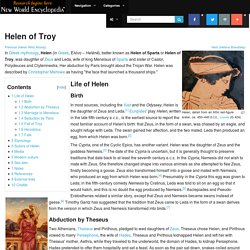 Her abduction by Paris brought about the Trojan War. Helen was described by Christopher Marlowe as having "the face that launched a thousand ships. " report this ad. Being a Girl in Ancient Greece – Women in Antiquity. This webpage seeks to paint a picture of girlhood in Ancient Greece, specifically girlhood during the Archaic period, stretching from the seventh century BCE until 480 BCE, and the Classical period which immediately followed it and lasted until 323 BCE. 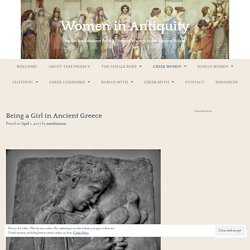 The evidence relayed here is almost exclusively from Greece itself, with some evidence deriving from Italy. I will discuss the birth of daughters, their infancy and girlhood, their role in ritual and religion, and their preparation for marriage. The Birth of Daughters The birth of girls was rarely so much as recorded in Ancient Greece, let alone celebrated[1]. Why Ancient Greek Mythology is Still Relevant Today. Why Is Greek Mythology Important Today? If there is one subject that is still widely taught today, it is the subject of ancient Greek mythology.

It isn’t just taught as part of a literature curriculum at school but is also part of most history lessons. Some people might wonder why the world is still so interested in ancient Greek myths when they are nothing but stories and they came from thousands of years ago. However, one look at the vast amount of ancient Greek-themed movies and literature today, people will quickly come to the conclusion that the world is still fascinated with Greek mythology, although they might not always be able to say why.

For those who think that the stories of ancient Greek mythology are nothing more than a bunch of outdated tales, they just happen to be wrong. These great men, Aristotle and Sophocles to name a few, were not mere story-tellers; they didn’t spend their days weaving tales just because they wanted to and had nothing to do. Stoicism and Pain Management: 4 Techniques Practiced By Marcus Aurelius. This is a guest post by Donald Robertson. Donald is a cognitive-behavioral psychotherapist, trainer, and writer.

Robertson has been tirelessly researching Stoicism and applying it in his work for twenty years. He is also the author of the remarkable new book on Marcus Aurelius, How To Think Like a Roman Emperor The Roman emperor Marcus Aurelius knew about using Stoicism to cope with chronic pain and illness. He had personal experience of doing so. As to my present state of health, you will be able to judge that easily enough from my shaky handwriting. The Roman historian Cassius Dio confirms that Marcus had problems with his chest. Marcus’ condition probably deteriorated when he had to leave Rome for the first time, following the outbreak of the First Marcomannic War, to assume command of the legions in Upper Pannonia, or modern-day Austria.

This difficulty sleeping appears to have troubled him for years, perhaps as a result of his other health problems. 1. 2. 3. This Greek philosopher had the right idea, just too few elements. Long before there was a periodic table of the elements, there was no need for a table — just four chairs. 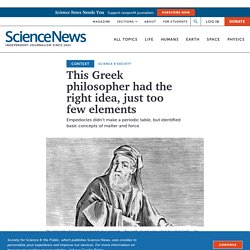 From ancient through medieval into early modern times, natural philosophers could count the known elements with the fingers of only one hand (with no need for the thumb). All material reality, nearly every authority concurred, was built from only four elements. And those four elements had been identified in the fifth century B.C. by the imaginative and somewhat idiosyncratic Greek philosopher known as Empedocles of Acragas. Sign Up For the Latest from Science News. How to Think Like a Roman Emperor by Donald Robertson – Modern Stoicism. Aristotle defines friendship as reciprocated goodwill, mainly a relationship between two people in which love and goodwill are shared. He describes three general types of friendship, that of utility, that of pleasure, and that of good or virtue. : Stoicis.

Is Philosophy A Worthless, Waste of Time? — A Skeptical Human. The Importance of Logic and Philosophy. The Madness of Caligula: Rome’s Cruelest Emperor? Caligula was Rome’s most tyrannical emperor. 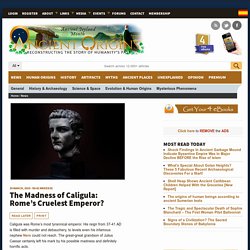 His reign from 37-41 AD is filled with murder and debauchery, to levels even his infamous nephew Nero could not reach. The great-great grandson of Julius Caesar certainly left his mark by his possible madness and definitely horrific acts. The story of Caligula is a legacy that goes back thousands of years. In his short life of only 29 years, he experienced terrible tragedy, a deep hatred for the man who killed his family, great power as the emperor of Rome , and eventually, a brutal death.