#:~:text=Notice%20how%20the%20value%20of,statements%20the%20program%20will%20execute.&text=The%20resulting%20structures%20are%20called%20multibranch%20if%2Delse%20statements. Multibranch if-else Statements Notice how the value of balance in Listing 8.2 determines which of the five different print statements the program will execute. 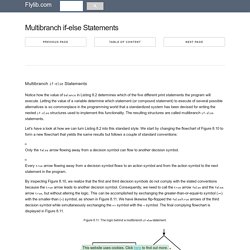 Letting the value of a variable determine which statement (or compound statement) to execute of several possible alternatives is so commonplace in the programming world that a standardized system has been devised for writing the nested if-else structures used to implement this functionality. The resulting structures are called multibranch if-else statements. Let's have a look at how we can turn Listing 8.2 into this standard style. We start by changing the flowchart of Figure 8.10 to form a new flowchart that yields the same results but follows a couple of standard conventions: Only the false arrow flowing away from a decision symbol can flow to another decision symbol.

Linear Programming Solver. Below you find soon to be outdated instructions on how to build Clp from the Subversion source. 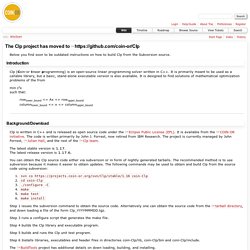 Introduction ¶ Clp (Coin-or linear programming) is an open-source linear programming solver written in C++. It is primarily meant to be used as a callable library, but a basic, stand-alone executable version is also available. It is designed to find solutions of mathematical optimization problems of the from min ctx such that: Analytic Solver for Excel. Installing Analytic Solver Data Mining & Obtaining a License. Excel Solver - Linear Programming. LP with Solver. Applicable to Excel 2002-2016 (including Office 365)(Google Drive Solver Procedures are Available Separately) 1. 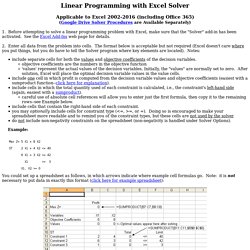 Before attempting to solve a linear programming problem with Excel, make sure that the "Solver" add-in has been activated. See the Excel Add-Ins web page for details. 2. Enter all data from the problem into cells. Include separate cells for both the values and objective coefficients of the decision variables. Max Z= 5 X1 + 8 X2 You could set up a spreadsheet as follows, in which arrows indicate where example cell formulas go. The following steps vary slightly with Excel version: 3. Excel 2002/03: click Tools at the top, then Solver. Excel 2007/10/13/16: click the Data tab at the top, then click Solver in the Analysis section toward the top right (called "Analyze" in Excel 2016). Mosek ApS. LINGO and optimization modeling. An Overview of LINGO LINGO is a comprehensive tool designed to make building and solving Linear, Nonlinear (convex & nonconvex/Global), Quadratic, Quadratically Constrained, Second Order Cone, Semi-Definite, Stochastic, and Integer optimization models faster, easier and more efficient. 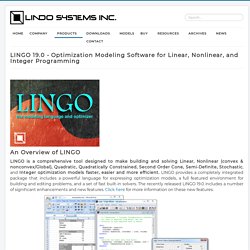 LINGO provides a completely integrated package that includes a powerful language for expressing optimization models, a full featured environment for building and editing problems, and a set of fast built-in solvers. The recently released LINGO 19.0 includes a number of significant enhancements and new features. Click here for more information on these new features. Gurobi - The fastest solver - Gurobi. CPLEX Optimizer. Model business issues mathematically and solve them with powerful algorithms from IBM® CPLEX® Optimizer, which can produce precise and logical decisions. 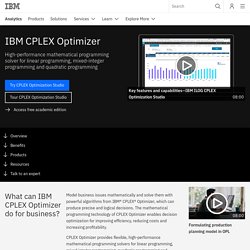 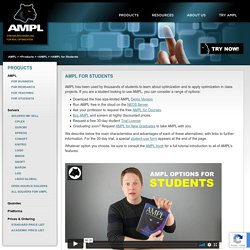 If you are a student looking to use AMPL, you can consider a range of options: Download the free size-limited AMPL Demo Version.Run AMPL free in the cloud on the NEOS Server.Ask your professor to request the free AMPL for Courses.Buy AMPL and solvers at highly discounted prices.Request a free 30-day student Trial License.Graduating soon? Request AMPL for New Graduates to take AMPL with you. Microsoft Excel - Download. Www.coursehero. Tsld027. Aviso de redirección. En.m.wikipedia. Algorithm History[edit] George Dantzig worked on planning methods for the US Army Air Force during World War II using a desk calculator. 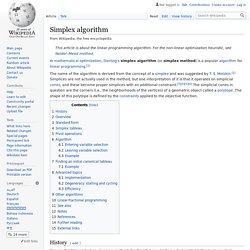 During 1946 his colleague challenged him to mechanize the planning process to distract him from taking another job. Dantzig formulated the problem as linear inequalities inspired by the work of Wassily Leontief, however, at that time he didn't include an objective as part of his formulation. Without an objective, a vast number of solutions can be feasible, and therefore to find the "best" feasible solution, military-specified "ground rules" must be used that describe how goals can be achieved as opposed to specifying a goal itself.

After Dantzig included an objective function as part of his formulation during mid-1947, the problem was mathematically more tractable. Overview[edit] Polyhedron of simplex algorithm in 3D The simplex algorithm operates on linear programs in the canonical form maximize subject to and with the coefficients of the objective function, Dantzigobit-052505.html#:~:text=In%201947%2C%20Dantzig%20devised%20the,formulating%20marketing%20and%20military%20strategies. Stanford Report, May 25, 2005 By Dawn Levy George Bernard Dantzig. 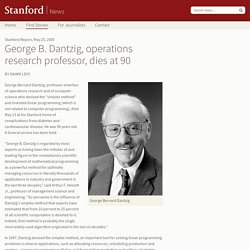 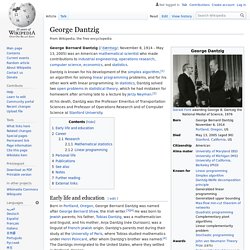 Dantzig is known for his development of the simplex algorithm,[1] an algorithm for solving linear programming problems, and for his other work with linear programming. In statistics, Dantzig solved two open problems in statistical theory, which he had mistaken for homework after arriving late to a lecture by Jerzy Neyman.[2] At his death, Dantzig was the Professor Emeritus of Transportation Sciences and Professor of Operations Research and of Computer Science at Stanford University. 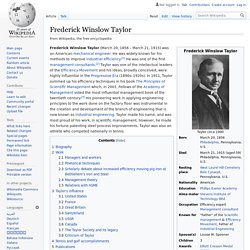 Taylor's father, Franklin Taylor, a Princeton-educated lawyer, built his wealth on mortgages.[4] Taylor's mother, Emily Annette Taylor (née Winslow), was an ardent abolitionist and a coworker with Lucretia Mott. His father's ancestor, Samuel Taylor, settled in Burlington, New Jersey, in 1677. His mother's ancestor, Edward Winslow, was one of the fifteen original Mayflower Pilgrims who brought servants or children, and one of eight who had the honorable distinction of Mister. William_S. American writer William Seward Burroughs II (; 5 February 1914 – 2 August 1997) was an American writer and visual artist. Burroughs was a primary figure of the Beat Generation and a major postmodern author whose influence affected popular culture as well as literature.

Burroughs wrote eighteen novels and novellas, six collections of short stories and four collections of essays. Five books have been published of his interviews and correspondences. History-computer. In 1875, the young William Seward Burroughs (biography of William Seward Burroughs), son of a mechanic from Rochester, New York, according to the father’s desire to choose a gentleman’s vocation, entered the Cayuga County National Bank of Auburn as a clerk. There he spent long and tedious hours of adding numbers. He was already interested in solving the problem of creating an adding machine, after attending a mathematical lecture in 1872, but now it become an obsession.

His sexual explicitness (he was an avowed and outspoken homosexual) and the frankness with which he dealt with his experiences as a drug addict won him a following among writers of the Beat movement. Britannica Quiz American Writers Quiz Who wrote Beloved? Burroughs was the grandson of the inventor of the Burroughs adding machine and grew up in St. William S. Burroughs - Wikipedia. Studylib. 1ca003_225e1f90fc02d788a6a390665a58091b. En.m.wikipedia. A difference engine, a calculating machine designed in the 1820s, was first created by Charles Babbage.

Repository.si. History-computer. During his lengthy stay with the armies of Marchall Soult, where he needed to perform a great deal of calculations, Charles-Xavier Thomas de Colmar (see biography of Thomas de Colmar) conceived the idea of the arithmometer. This became even more important in his eyes when, in 1819, he was appointed General Manager of the Phoenix insurance company and, later, when he founded the insurance companies Soleil (Sun) and Aigle (Eagle). Www.britannica. Detail. En.m.wikipedia. En.m.wikipedia. En.m.wikipedia. En.m.wikipedia. En.m.wikipedia. Replica of Leibniz's stepped reckoner in the Deutsches Museum. ... it is beneath the dignity of excellent men to waste their time in calculation when any peasant could do the work just as accurately with the aid of a machine. The step reckoner (or stepped reckoner) was a digital mechanical calculator invented by the German mathematician Gottfried Wilhelm Leibniz around 1673 and completed in 1694.[1] The name comes from the translation of the German term for its operating mechanism, Staffelwalze, meaning "stepped drum".

It was the first calculator that could perform all four arithmetic operations.[2] Its intricate precision gearwork, however, was somewhat beyond the fabrication technology of the time; mechanical problems, in addition to a design flaw in the carry mechanism, prevented the machines from working reliably.[3][4] Two prototypes were built; today only one survives in the National Library of Lower Saxony (Niedersächsische Landesbibliothek) in Hanover, Germany.