Berkeley, A Treaties Concerning the Principles of Human Knowledge

Francis Bacon the "rejection of purpose" Metempsychosis. Transmigration of the soul Europe before the pre-Socratic philosophers[edit] In Greek philosophy[edit] The earliest Greek thinker with whom metempsychosis is connected is Pherecydes of Syros,[8] but Pythagoras, who is said to have been his pupil, is its first famous philosophic exponent. 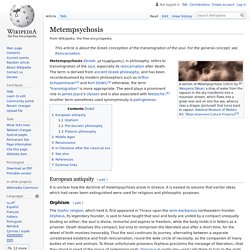 Pythagoras is not believed to have invented the doctrine or to have imported it from Egypt. Instead he made his reputation by bringing the Orphic doctrine from North-Eastern Hellas to Magna Graecia, and creating societies for its diffusion. In later Greek literature the doctrine appears from time to time; it is mentioned in a fragment of Menander (the Inspired Woman) and satirized by Lucian (Gallus 18 seq.).

Post-Classical occurrence[edit] Metempsychosis was a part of the Neo-Manichaen dogma of the Albigenses around France in the 12th century.[11] Created in the early XVth century, the Rosicrucianist movement also conveyed an occult doctrine of metempsychosis.[12] In literature after the classical era[edit] Explicit. Ancient religious movement. Manichaeism, dualistic religious movement founded in Persia in the 3rd century ce by Mani, who was known as the “Apostle of Light” and supreme “Illuminator.”

Although Manichaeism was long considered a Christian heresy, it was a religion in its own right that, because of the coherence of its doctrines and the rigidness of its structure and institutions, preserved throughout its history a unity and unique character. Read More on This Topic ancient Iran: Manichaeism During the reign of Shāpūr I a new religious leader and movement made their appearance. Mani (216? Manichaeism. Ancient extinct Gnostic Persian religion founded in the 3rd century AD Image of a Manichaean temple with stars and seven firmaments Manichaeism taught an elaborate dualistic cosmology describing the struggle between a good, spiritual world of light, and an evil, material world of darkness.[6] Through an ongoing process that takes place in human history, light is gradually removed from the world of matter and returned to the world of light, whence it came. 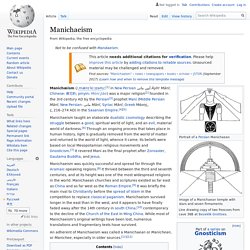 Its beliefs were based on local Mesopotamian religious movements and Gnosticism.[7] It revered Mani as the final prophet after Zoroaster, Gautama Buddha, and Jesus. Manichaeism was quickly successful and spread far through the Aramaic-speaking regions.[8] It thrived between the third and seventh centuries, and at its height was one of the most widespread religions in the world.

Pr.nd. To what extent, if any, was Leibniz an idealist, that is, one who holds that all things are ultimately just immaterial minds and their contents? 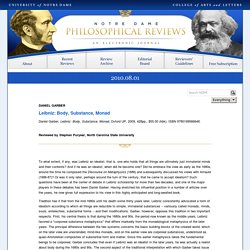 And if he was an idealist, when did he become one? Did he embrace the view as early as the 1680s, around the time he composed the Discourse on Metaphysics (1686) and subsequently discussed his views with Arnauld (1686-87)? Or was it only later, perhaps around the turn of the century, that he came to accept idealism? Such questions have been at the center of debate in Leibniz scholarship for more than two decades, and one of the major players in these debates has been Daniel Garber. Having sketched his influential position in a number of articles over the years, he now gives full expression to his view in this highly anticipated and long-awaited book. Substance. 1. 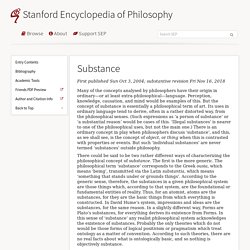 Underlying Ideas Reflection on the concept of an object has its first theoretical articulation in Aristotle’s Categories, where he distinguishes between individual objects and the various kinds of properties they can possess. He illustrates the various categories: each [individual term] signifies either substance or quantity or qualification or a relative or where or when or being in a position or having or doing or being affected. 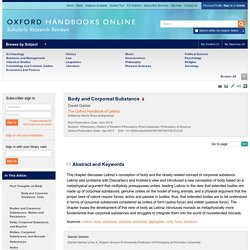 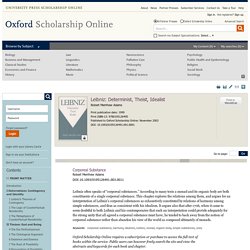 George Berkeley, The Principles Of Human Knowledge (1710): Western Civilization II. The Irish-born philosopher George Berkeley (1685-1753) was educated at Trinity College in Dublin, was made a fellow of the College in 1707, and was later ordained in the Anglican Church. 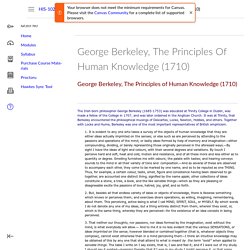 It was at Trinity, that Berkeley encountered the philosophical musings of Descartes, Locke, Newton, Hobbes, and others. Together with Locke and Hume, Berkeley was one of the most important representatives of British empiricism. 1. It is evident to any one who takes a survey of the objects of human knowledge that they are either ideas actually imprinted on the senses; or else such as are perceived by attending to the passions and operations of the mind; or lastly ideas formed by help of memory and imagination—either compounding, dividing, or barely representing those originally perceived in the aforesaid ways. —By sight I have the ideas of light and colours, with their several degrees and variations. 2. 3. 4. 5. 6. 7. 8. 9. 10. 11. Squashed Philosophers - Berkeley - Principles of Human Knowledge. George BerkeleyPrinciples of Human Knowledge ... 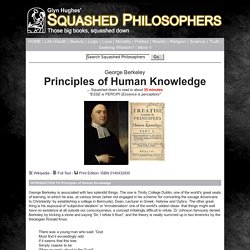 Squashed down to read in about 35 minutes"ESSE is PERCIPI (Essence is perception)" Wikipedia - Full Text - Print Edition: ISBN 0140432930 George Berkeley is associated with two splendid things. The one is Trinity College Dublin, one of the world's great seats of learning, to which he was, at various times (when not engaged in his scheme 'for converting the savage Americans to Christianity' by establishing a college in Bermuda), Dean, Lecturer in Greek, Hebrew and Optics.

There was a young man who said: 'God Must find it exceedingly odd If it seems that this tree Simply ceases to be When no-one's about in the Quad'"Sir, your astonishment's odd: I am always about in the Quad. George Berkeley (1685–1753) – Modern Philosophy. Born in Kilkenny, Ireland, George Berkeley was appointed Bishop of Cloyne (near Cork) in 1734. 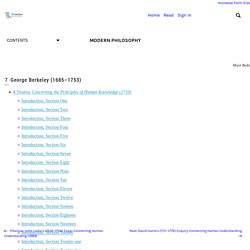 In 1709, he published An Essay towards a New Theory of Vision, which lays the groundwork for his attack on the belief in material substance. Great Philosophers: Berkeley. Berkeley, George. George Berkeley was one of the three most famous British Empiricists. 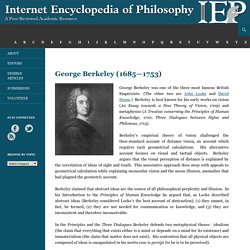 (The other two are John Locke and David Hume.) Corporeal dictionary definition. Corporeal (adjective) definition and synonyms. Corporeal. Corporeal - Dictionary Definition. “"that which is created is of necessity corporeal and visible and tangible" - Benjamin Jowett” Synonyms: material bodied having a body or a body of a specified kind; often used in combination bodily having or relating to a physical material body.