Vulnerability: The Key to Better Relationships. Maybe you’re one of those people who cringes when they hear the world “vulnerability.” 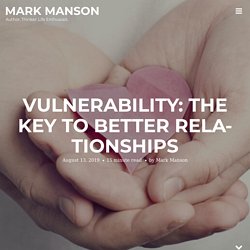 Maybe the very thought of being more vulnerable nauseates you, conjuring up images of holding hands around the campfire while you cry over how your best friend doesn’t love you like you love him, or whatever. The One Trait to Look For In a Partner. A sizable portion of the dating pool is made up of people who think that all of the people they meet and date are untrustworthy, shallow, selfish, and manipulative. 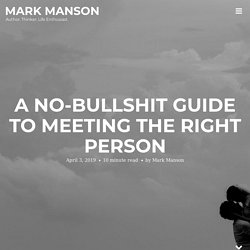 Yet, as I’ve written previously, if all of your relationships end in psychological ruin, then that says more about you and less about everyone else. Your sample size sucks. And your ability to choose a romantic partner sucks. The Secrets to Dating a Non-Runner - Outside - Pocket. Photo by Jun Cen. 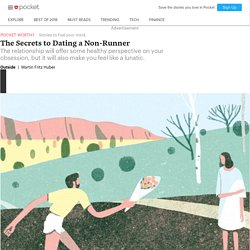 My wife and I have a deal: every time she joins me for a run around the park near where we live, I buy her flowers. Marriage Has Become a Trophy. Matt Benoit / goir / timurockart / Nerthuz / Manon_Labe / Shutterstock / Arsh Raziuddin / The Atlantic The decline of marriage is upon us. 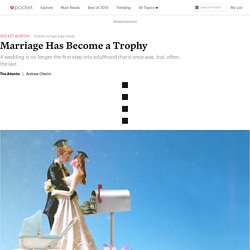 Or, at least, that’s what the zeitgeist would have us believe. In 2010, when Time magazine and the Pew Research Center famously asked Americans whether they thought marriage was becoming obsolete, 39 percent said yes. That was up from 28 percent when Time asked the question in 1978. Also, since 2010, the Census Bureau has reported that married couples have made up less than half of all households; in 1950 they made up 78 percent. But there is one statistical tidbit that flies in the face of this conventional wisdom: A clear majority of same-sex couples who are living together are now married.

The move toward marriage has not been driven by young gay and lesbian couples rushing to the altar. I Hate My Wife - 4 Common Reasons Husbands Resent Their Wife. Marriage is meant to last forever—according to wedding toasts, love songs, and various religious texts, anyway—and given our ever-lengthening average life expectancy, forever is a long, long time. 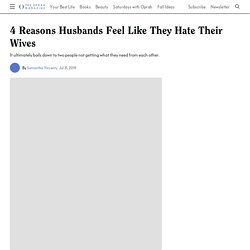 It's one thing to pledge eternal love as you stand fresh-faced and beaming at your bride on the day of your nuptials; actually living out that promise twenty, thirty, or forty years later can be quite another. Even the happiest, healthiest marriages require a certain amount of work to stay that way, but what happens when your relationship has you saying, "I think I hate my wife? " Not the boiling, toxic hate that leads to the ugly crimes of passion recounted in Dateline episodes, but a...strong dislike. The type that leaves you struggling to remember the last time you enjoyed your wife's company, and even has you entertaining thoughts of infidelity or divorce. It's actually normal to "hate" your wife sometimes. 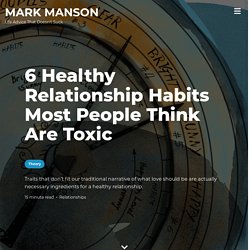 It became very successful. How Men Became "Emotional Gold Diggers" — Men Have No Friends and Women Bear the Burden. Kylie-Anne Kelly can’t remember the exact moment she became her boyfriend’s one and only, his what would I do without you, but she does remember neglecting her own needs to the point of hospitalization. 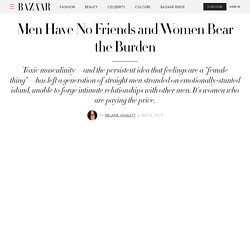 “I talked him through his aspirations, validated his opinions, and supported his career. I had to be his emotional guru because he was too afraid to admit he had any emotions at all,” recalls the 24-year-old English teacher, who was studying for her PhD at the time. Kelly’s boyfriend refused to talk to other men or a therapist about his feelings, so he’d often get into “funks,” picking pointless fights when something was bothering him. Eventually, Kelly became his default therapist, soothing his anxieties as he fretted over work or family problems. How Your Relationships Can Bring Out the Best in You. The Case Against Marriage. In America today, it’s easy to believe that marriage is a social good—that our lives and our communities are better when more people get and stay married. There have, of course, been massive changes to the institution over the past few generations, leading the occasional cultural critic to ask: Is marriage becoming obsolete? But few of these people seem genuinely interested in the answer.

More often the question functions as a kind of rhetorical sleight of hand, a way of stirring up moral panic about changing family values or speculating about whether society has become too cynical for love. In popular culture, the sentiment still prevails that marriage makes us happy and divorce leaves us lonely, and that never getting married at all is a fundamental failure of belonging. But speculation about whether or not marriage is obsolete overlooks a more important question: What is lost by making marriage the most central relationship in a culture? 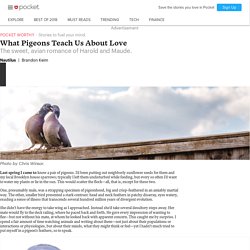 The Secrets to Dating a Non-Runner - Outside - Pocket. Maybe You Don’t Know What Love Is - Mark Manson - Pocket. 6 Toxic Relationship Habits Most People Think Are Normal - Mark Manson - Pocket. There’s no class in high school on how to not be a shitty boyfriend or girlfriend. Sure, they teach us the biology of sex, the legality of marriage, and maybe we read a few obscure love stories from the 19th century on how not to be. But when it comes down to actually handling the nitty-gritty of relationships, we’re given no pointers… or worse, we’re given advice columns in women’s magazines. Yes, it’s trial-and-error from the get-go. And if you’re like most people, it’s been mostly error. But part of the problem is that many unhealthy relationship habits are baked into our culture. A lot of the self-help literature out there isn’t helpful either (no, men and women are not from different planets, you over-generalizing prick).

Fortunately, there’s been a lot of psychological research into healthy and happy relationships the past few decades and there are some general principles that keep popping up consistently that most people are unaware of or don’t follow. Got Relationship Problems? Alain de Botton on Love, Vulnerability, and the Psychological Paradox of the Sulk - Brain Pickings - Pocket. Alain de Botton “Nothing awakens us to the reality of life so much as a true love,” Vincent van Gogh wrote to his brother. 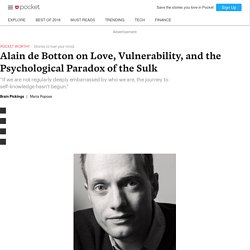 “Why is love rich beyond all other possible human experiences and a sweet burden to those seized in its grasp?” Philosopher Martin Heidegger asked in his electrifying love letters to Hannah Arendt. “Because we become what we love and yet remain ourselves.” Still, nearly every anguishing aspect of love arises from the inescapable tension between this longing for transformative awakening and the sleepwalking selfhood of our habitual patterns. The multiple sharp-edged facets of this question are what Alain de Botton explores in The Course of Love (public library) — a meditation on the beautiful, tragic tendernesses and fragilities of the human heart, at once unnerving and assuring in its psychological insightfulness. Art from Strong as a Bear by Katrin Stangl Art by Isol from Daytime Visions. How the Five "Love Languages" Can Help You Win at Relationships - Lifehacker - Pocket.

Ever had an argument with your partner and wished they could just read your mind? 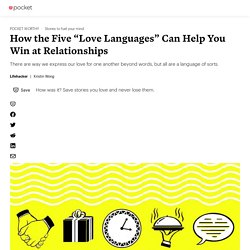 If they only knew how you were feeling, they’d stop putting up a fight. That’s sort of the idea behind the concept of love languages: they let you in on what makes your partner tick. The idea is: we all express and feel love differently, and understanding those differences can seriously help your relationship. In fact, it’s one of the simplest ways to improve it. Masters of Love - The Atlantic - Pocket. Gottman wanted to know more about how the masters created that culture of love and intimacy, and how the disasters squashed it. In a follow-up study in 1990, he designed a lab on the University of Washington campus to look like a beautiful bed and breakfast retreat. He invited 130 newlywed couples to spend the day at this retreat and watched them as they did what couples normally do on vacation: cook, clean, listen to music, eat, chat, and hang out.

And Gottman made a critical discovery in this study—one that gets at the heart of why some relationships thrive while others languish. Throughout the day, partners would make requests for connection, what Gottman calls “bids.” For example, say that the husband is a bird enthusiast and notices a goldfinch fly across the yard. The wife now has a choice. People who turned toward their partners in the study responded by engaging the bidder, showing interest and support in the bid. Every Successful Relationship Is Successful for the Same Exact Reasons - Mark Manson - Pocket.

Hey, guess what? I got married two weeks ago. And like most people, I asked some of the older and wiser folks around me for a couple quick words of relationship advice from their own marriages to make sure my wife and I didn’t shit the (same) bed. I think most newlyweds do this — ask for relationship advice, I mean, not shit the same bed part — especially after a few cocktails from the open bar they just paid way too much money for. But, of course, not being satisfied with just a few wise words, I had to take it a step further.

See, I have access to hundreds of thousands of smart, amazing people through my site. Why not crowdsource THE ULTIMATE RELATIONSHIP GUIDE TO END ALL RELATIONSHIP GUIDES™ from the sea of smart and savvy partners and lovers here? 6 Toxic Relationship Habits Most People Think Are Normal - Mark Manson - Pocket. How to Argue Better With Your Partner. Leo Tolstoy on Love and Its Paradoxical Demands - Brain Pickings - Pocket. Leo Tolstoy (September 9, 1828–November 10, 1910) began tussling with the grandest questions of existence from an early age. As a young man, he struggled through his search for himself, learned the hard way about the moral weight of immoral motives, and confronted the meaning of human existence. How Connected Lighting Helped This Couple’s Relationship.

One way long-term marriages become happier, according to researchers — Quartzy. How to Love: Legendary Zen Buddhist Teacher Thich Nhat Hanh on Mastering the Art of “Interbeing” - Brain Pickings - Pocket. What does love mean, exactly? The Marriage Decision: Everything Forever or Nothing Ever Again - Wait But Why - Pocket. There’s not really any normal way to start a relationship.