Bucky Fuller on Industrialization. How to Industrialize Mars – Casey Handmer's blog. Remarks from talk given at the Mars Society Convention, August 23 2018, now in blog form. 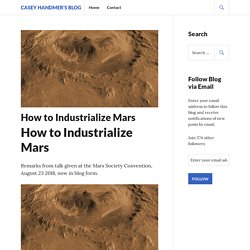 I always prefer to start talks with a recognizable image. Mars Industrialization Roadmap. Mars Autarky Kindle. Mars is Hard - Casey Handmer. Okay, so you're an enthusiast with a technical background, and you're interested in getting involved in the defining challenge of humanity; increasing our planet number to more than one. 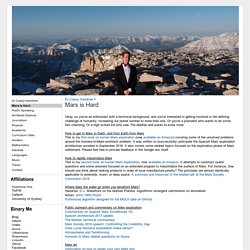 Or you're a journalist who wants to do some fact checking. Or a high school kid who saw The Martian and wants to know more. How to get to Mars to Earth, and from Earth from Mars This is my first book on human Mars exploration (now available on Amazon) covering some of the unsolved problems around the humans-to-Mars-and-back problem. It was written to (successfully) anticipate the SpaceX Mars exploration architecture unveiled in September 2016. How to rapidly industrialize Mars Where does the water go when you terraform Mars? Handmer, C J. Public outreach and commentary on Mars exploration. The Future is Automation. 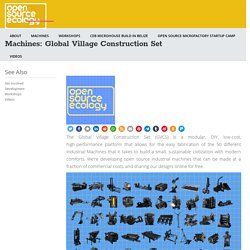 Our goal is lifetime design, and low maintenance so only a few hours of maintenance per year are required to keep any machine alive. We have built the first machine in 2007 – the Compressed Earth Brick Press. Technological revolution. Axe made of iron, dating from Swedish Iron Age, found at Gotland, Sweden: the iron—as a new material—initiated a dramatic revolution in technology, economy, society, warfare and politics. 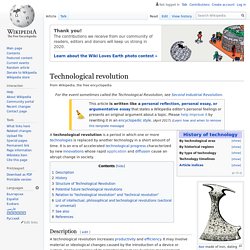 A technological revolution is a period in which one or more technologies is replaced by another technology in a short amount of time. It is an era of accelerated technological progress characterized by new innovations whose rapid application and diffusion cause an abrupt change in society. Description[edit] IBM Personal Computer XT in 1988—the PC was an invention that dramatically changed not only professional life, but personal life as well. A technological revolution increases productivity and efficiency.

What distinguishes a technological revolution from a random collection of technology systems and justifies conceptualizing it as a revolution are two basic features: 1. The Carrier Wave: New Information Technology and the Geography of Innovation, 1846-2003, Peter Hall and Paschal Preston. 1988. Industrial revolutions: the 4 main revolutions in the industrial world. Since Prometheus stole the fire of knowledge from right under the noses of the gods on Mount Olympus and bestowed it upon mankind, humans have not stopped fiddling with it and creating striking innovations all throughout their evolution. 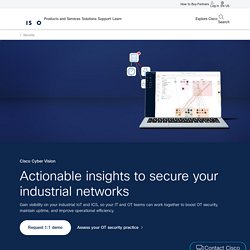 Over the course of history, mankind has perfected its industry by not only relying on technical evolution but also by reinventing it as new resources have created new technical means. Therefore, industry has benefited from qualitative advancements which have sometimes been so ingrained in a certain time period and have had such an overwhelming impact that we have dubbed them “revolutions”. Sentryo would like to give you a quick look back in time at these first three industrial revolutions to define the contours of a fourth revolution which is taking shape right before our very eyes. 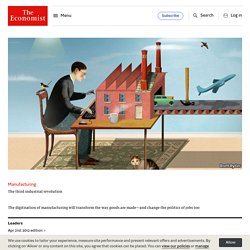 Tasks previously done laboriously by hand in hundreds of weavers' cottages were brought together in a single cotton mill, and the factory was born. The second industrial revolution came in the early 20th century, when Henry Ford mastered the moving assembly line and ushered in the age of mass production. The first two industrial revolutions made people richer and more urban. Now a third revolution is under way. Manufacturing is going digital. A number of remarkable technologies are converging: clever software, novel materials, more dexterous robots, new processes (notably three-dimensional printing) and a whole range of web-based services. Choose us for news analysis that respects your time and intelligence Subscribe to The Economist Save on annual and multi-year packages.

The Third Industrial Revolution; How Lateral Power is Transforming Energy, the Economy, and the World (2011) by Jeremy Rifkin. U.S. Industrialization, FORTUNE February 1940, Vol. 21, No. 2, (Appendix A.3, pp. 47-74 World Game Series Document 1) The Evolution of Industries. Technology tree. In strategy computer games, a technology, tech, or research tree is a hierarchical visual representation of the possible sequences of upgrades a player can take (most often through the act of research). 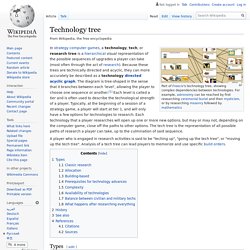 Because these trees are technically directed and acyclic, they can more accurately be described as a technology directed acyclic graph. The diagram is tree-shaped in the sense that it branches between each 'level', allowing the player to choose one sequence or another.[1] Each level is called a tier and is often used to describe the technological strength of a player. Typically, at the beginning of a session of a strategy game, a player will start at tier 1, and will only have a few options for technologies to research. Each technology that a player researches will open up one or more new options, but may or may not, depending on the computer game, close off the paths to other options. Types[edit] Classic research[edit] Allocation[edit] Building-based[edit] Complexity[edit] History[edit]