Comedy Clubs. Breakfast. * (Rockville) Slapfish. Hamburgers. Seafood. Pizza. Hispanic. Bars. Restaurants (Date Night) Bars- Casual. 16 Essential Breweries Around D.C. The past decade or so has produced a revival of craft brewing in the D.C. area, with breweries popping up in the District proper, in the open space of Loudoun County, and in the Maryland suburbs. 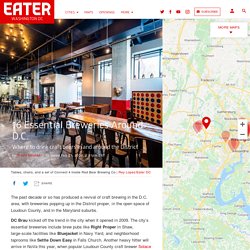 DC Brau kicked off the trend in the city when it opened in 2009. The city’s essential breweries include brew pubs like Right Proper in Shaw, large-scale facilities like Bluejacket in Navy Yard, and neighborhood taprooms like Settle Down Easy in Falls Church. Another heavy hitter will arrive in NoVa this year, when popular Loudoun County craft brewer Solace takes over the Mad Fox brewpub space in Falls Church. Here are 16 essential breweries for beer fans to visit around D.C. — Updated by Adele Chapin and Gabe Hiatt Read More.

Cinnaholic Downtown Crown. The Avenue - American Restaurant in Washington, DC. Service Bar. Service Bar co-owner Chad Spangler thought the casual cocktail bar on U Street NW would shelve its plans to collaborate on a fried chicken sandwich with A Rake’s Progress chef Opie Crooks while D.C. enforces a dine-in ban to slow the spread of the novel coronavirus. 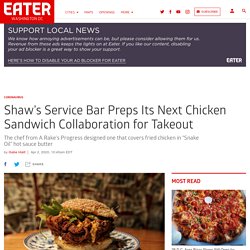 But a quick-turnaround decision to let bars sell to-go drinks has been a bit of a saving grace, and Service Bar has been sending out 32-ounce al pastor margaritas and saffron gin and tonics anyway, so Spangler decided to start selling the Opie’s sandwich last night. Crooks, who leads Spike Gjerde’s wood-burning Mid-Atlantic restaurant in the Line hotel, came up with a sandwich that covers the chicken in a hot sauce butter made out of butter, cream cheese, and the “Snake Oil” sauce from Woodberry Kitchen that’s made from aged fish peppers. The sandwich ($12) also gets dressed in chile oil, herby buttermilk dressing, dill pickles, and greens. 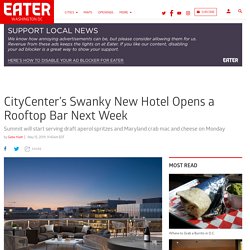 Summit the Rooftop is slated to start service on Monday, May 20, luring customers to the 11th floor with cocktails ranging from an Old Fashioned and a margarita to a peach caipirinha. Zach Luther, the venue’s lead bartender, has also come up with a Parisian Party — La Colombe cold brew with vermouth, absinthe, Demerara sugar, and soda — and a Glasgow Maid that blends Johnnie Walker Black with vermouth, cucumber, lemon, and a salt garnish. In addition to a buffet of panoramic views that could make Summit a launching pad for enjoying Fourth of July fireworks, the rooftop will serve small plates including roasted pork “wings,” Maryland crab mac and cheese, and bone-in short ribs with a Calabrian chile glaze that come as part of a multi-person taco platter for $40. Sonny's. Boos Philly Cheesesteaks. 12 Stories Rooftop Bar Opens In Style in the Wharf Intercontinental.

The Intercontinental Hotel at the Wharf is ready to show off its buzzy rooftop cocktail spot. 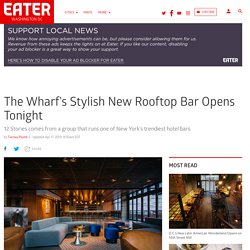 The 3,500-square-foot drinking destination, dubbed 12 Stories, is scheduled to open on the 12th story of the hotel tonight at 4 p.m. Officina’s Stunning Sun-Drenched Cafe Just Landed on the Wharf - Eater DC. Officina’s all-day waterfront cafe aims to cater to every craving and schedule, whether that means ordering a to-go cappuccino and cannoli — or leisurely sipping a morning Aperol spritz while taking in views of boats bobbing outside. 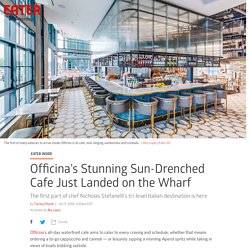 “If you’re working the night shift that could be your happy hour,” says chef Nicholas Stefanelli of the airy European-style cafe, the debut piece of his anticipated tri-level culinary playground. The 40-seat setup quietly opened over the weekend and is running with limited service this week from 8 a.m. to 4 p.m. for food and 4 p.m. to 8 p.m. for cocktails. Eventually, its hours will stretch from 7 a.m. to midnight daily (1120 Maine Avenue SW), with full bar service all day. Stefanelli’s transportive goal is to make D.C. diners imagine they’re hanging out in a modern Italian cafe across the globe, with pastries and egg sandwiches in the morning followed by all-day Italian street food fare as the sun sets.