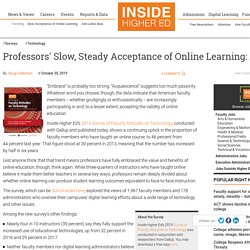 “Acquiescence” suggests too much passivity. Whatever word you choose, though, the data indicate that American faculty members -- whether grudgingly or enthusiastically -- are increasingly participating in and, to a lesser extent, accepting the validity of online education. Inside Higher Ed's 2019 Survey of Faculty Attitudes on Technology, conducted with Gallup and published today, shows a continuing uptick in the proportion of faculty members who have taught an online course, to 46 percent from 44 percent last year. That figure stood at 30 percent in 2013, meaning that the number has increased by half in six years. Lest anyone think that that trend means professors have fully embraced the value and benefits of online education, though, think again. Among the new survey's other findings: Practice vs. Community College Librarians and the ACRL Framework: Findings fro.

8 Ways Generation Z Will Differ From Millennials In The Workplace. Generation Z is composed of those born between 1995 and 2010, which means that the oldest are about 22 and are just entering the workforce. 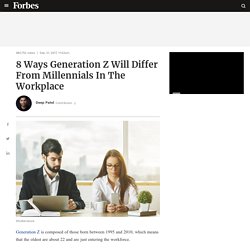 The media has focused a lot on millennials in recent years, but it’s time to turn some of the attention to the millennials’ future co-workers. Gen Zers have a lot in common with millennials, but there are also many ways in which the two generations differ. 1. Gen Z Is Motivated By Security. Common Characteristics of Millenial Professionals. Millennials, or members of Generation Y (also known as Gen Y) were born between 1982 and 2000, according to the U.S. 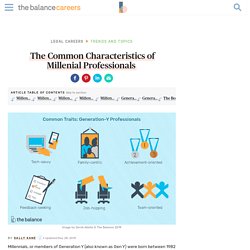 Census Bureau. The Census Bureau estimates that there are 83.1 million millennials in the U.S., and the Pew Research Center found that millennials surpassed baby boomers (boomers) to become the largest living generation in the United States in 2016. College associations. The Rights and Wrongs of Federal Guidelines on Sexual Assault. During the Obama Administration, the Department of Education’s Office for Civil Rights warned colleges and universities that, if they did not take further measures to prevent and remedy sexual violence among students, they could lose their federal funding. 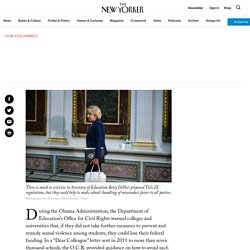 In a “Dear Colleague” letter sent in 2011 to more than seven thousand schools, the O.C.R. provided guidance on how to avoid such a punishment. Although the letter was not legally binding, and contained few very clear instructions, the agency posted a shame list of schools that were under investigation for noncompliance with Title IX, the law, passed in 1972, that prohibits sex discrimination at federally funded institutions.

At a gathering of college administrators at Dartmouth, in 2014, the assistant secretary for civil rights, Catherine Lhamon, said, “Do not think it’s an empty threat.” What are the differences between Columbia... How does Columbia accommodate students with food allergies? 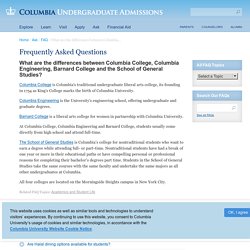 Columbia Dining is committed to making dining halls safe places to eat. MIT OpenCourseWare. I'll Never Do It Again. Cass & Birnbaum's guide to American colleges. (Journal, magazine, 1994) Being Present- A Critique of Online Education by Bob Samuels. One potentially positive result of the current fascination with online education is that universities and colleges may be forced to define and defend quality education. 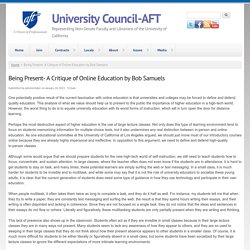 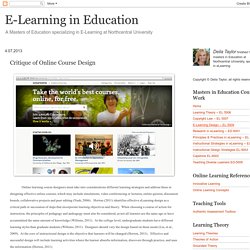 Horton (2011) identifies effective eLearning design as a critical path or succession of steps that incorporate learning objectives and theory. Study challenges cost and price myths of online education. Answering the Critics of Online Education. There is a vigorous debate taking place on the quality of online higher education programs. 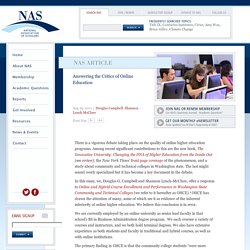 Among recent significant contributions to this are the new book, The Innovative University: Changing the DNA of Higher Education from the Inside Out (see review); the New York Times’ front page coverage of the phenomenon, and a study about community and technical colleges in Washington state. New NBER Study on Online Education is Deeply Flawed - "The One Thing You Should Stop Telling Your Coworkers" The Research Essay from an Instructor’s Perspective.

[The following is adapted from a talk I gave to colleagues who provide library instruction for first-year college writing courses, but have never taught one themselves. 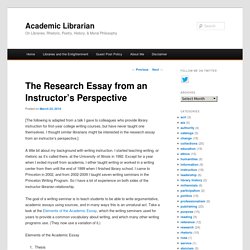 I thought similar librarians might be interested in the research essay from an instructor’s perspective.] A little bit about my background with writing instruction. I started teaching writing, or rhetoric as it’s called there, at the University of Illinois in 1992. Except for a year when I exiled myself from academia, I either taught writing or worked in a writing center from then until the end of 1999 when I finished library school.

I came to Princeton in 2002, and from 2002-2009 I taught seven writing seminars in the Princeton Writing Program. The goal of a writing seminar is to teach students to be able to write argumentative, academic essays using sources, and in many ways this is an unnatural act. Elements of the Academic Essay 13 elements of the academic essay. Mango Academic ValueofLibraryonCampus. 23 Common Introductory Assignments You'll Find in Architecture School. A Tough-Talking President Tried to Fix a College. Then He Came Undone. Online Ed Skepticism and Self-Sufficiency: Survey of Faculty Views on Technology. Online Learning: Reaching Out to the Skeptics. US professors aren’t getting any more accepting of online learning—but students definitely are.

Higher Ed Faculty Skeptical About Online Course Quality. Professors hate online education. To save colleges, they have to learn to love it. Is online education good or bad? And is this really the right question? Course Critique. A Picture Is Worth a Thousand Words: Applying Image-based Learning to Course Design on JSTOR. The Myth of Information Literacy. Mango Academic 9 Innovations. How Professors Ceded Their Authority. What’s the Most Influential Book of the Past 20 Years?