What's in the news

The right strategies will only work if you have the right people. ONLY a fraction of properly formulated strategies are executed, which continues to bedevil companies both large and small, Robert S Kaplan and David P Norton — who developed the balanced scorecard in 2001 — have argued. 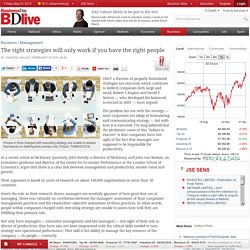 The problem lies not with the strategy — most corporates are adept at formulating and communicating strategy — but with how it is executed. I’ve long believed that the proximate cause of this "failure to execute" is that companies have lost sight of the fact that managers are supposed to be responsible for productivity. In a recent article in McKinsey Quarterly John Dowdy, a director of McKinsey, and John van Reenen, an economics professor and director of the Centre for Economic Performance at the London School of Economics, argue that there is a clear link between management and productivity, market value and growth.

Fast Company. How teamwork, trust and improved communication reduce mistakes in the ER. It's so easy to think you've communicated a message clearly. 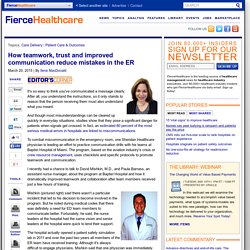 After all, you understand the instructions, so it only stands to reason that the person receiving them must also understand what you meant. And though most misunderstandings can be cleared up quickly in everyday situations, studies show that they pose a significant danger for patients when signals get crossed. In fact, an estimated 80 percent of the most serious medical errors in hospitals are linked to miscommunications. Uk.businessinsider.

Role of Perception in Consumer Behavior. How Personality Type Influences Leadership Style. Sheryl Sandberg’s campaign to ban "bossy" may have stirred up plenty of heated responses, but it only scratched the surface of a much deeper discussion regarding how gender stereotypes shape the development of our personality. 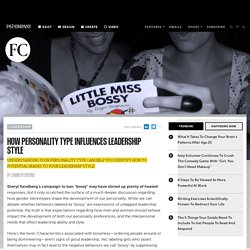 While we can debate whether behaviors labeled as "bossy" are expressions of untapped leadership potential, the truth is that expectations regarding how men and women should behave impact the development of both our personality preferences, and the interpersonal needs that affect leadership ability and style. Here’s the twist. Characteristics associated with bossiness—ordering people around or being domineering—aren’t signs of good leadership. Yet, labeling girls who assert themselves may in fact lead to the negative behaviors we call "bossy" by suppressing cultivation of their natural leadership style.

Leadership Style Is A Highly Personal Thing In either case, it indicates a major challenge for women in leadership. Know yourself, and know others, too. The Good and the Evil of Time Tracking. A recent article featured in Harper’s Magazine is making some waves for its take on time tracking and workplace monitoring. 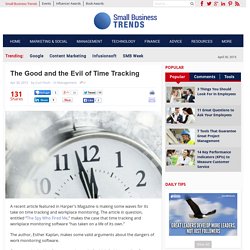 The article in question, entitled “The Spy Who Fired Me,” makes the case that time tracking and workplace monitoring software “has taken on a life of its own.” The author, Esther Kaplan, makes some valid arguments about the dangers of work monitoring software. One example cited is of a woman who works for high-fashion retailer, Century 21, in New York City. How Corporate Culture Affects Job Satisfaction. Zappos’ CEO says company is going without managers. Zappos CEO Tony Hsieh, the man who wrote the book on delivering happiness, wants to deliver a call center without managers. 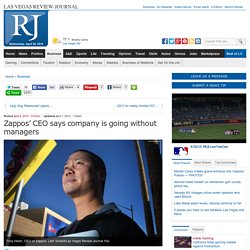 Motivation as a contagious tool in the workplace. “I’ve tried everything — reward and punishment — yet nothing works …” No doubt you’ve blurted those words with a gulp of exasperation wanting to know, “What do I do?” 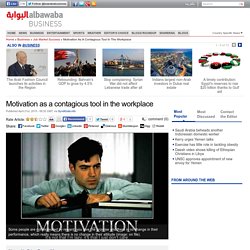 To get my team to perform. Motivating sounds so easy when you listen to the speeches on YouTube and read the popular business books, but it never quite works out the way we think it will. Giving employees a little more money or instilling the fear of the boss is not supposed to result in you being frustrated that nothing works. The carrot or stick is believed to be the answer. Why being yourself at work is best. Nearly 75 percent of employed Americans have admitted to covering up at least some part of their personality in the workplace in order to fit in, according to a study from Deloitte. 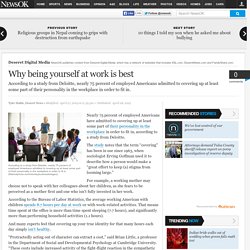 The study notes that the term “covering” has been in use since 1963, when sociologist Erving Goffman used it to describe how a person would make a “great effort to keep (a) stigma from looming large.” For example, a working mother may choose not to speak with her colleagues about her children, as she fears to be perceived as a mother first and one who isn’t fully invested in her work. According to the Bureau of Labor Statistics, the average working American with children spends 8.7 hours per day at work or with work-related activities. That means time spent at the office is more than time spent sleeping (7.7 hours), and significantly more than performing household activities (1.1 hours). And many experts feel that covering up your true identity for that many hours each day simply isn’t healthy. 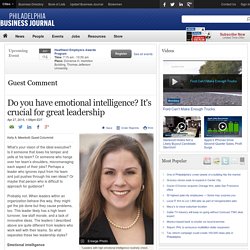 Business boom on social media. How to Build a Better Business Content Creation Team  If you want your business to be successful in today's world, you need to be online. 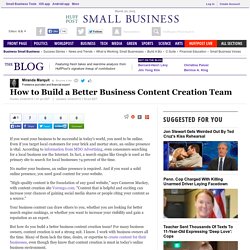 Even if you target local customers for your brick and mortar store, an online presence is vital. According to information from MDG Advertising, even consumers searching for a local business use the Internet. In fact, a search engine like Google is used as the primary site to search for local businesses 74 percent of the time. No matter your business, an online presence is required.