The Evidence on Advanced Maternal Age - Evidence Based Birth - The free live webinar will be online on Wednesday, April 6 at 9 PM EDT. 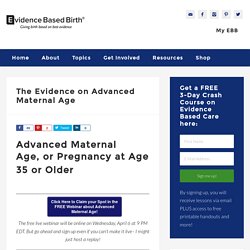 But go ahead and sign up even if you can’t make it live– I might just host a replay! Women who are pregnant at age 35 or older are often referred to as “advanced maternal age.” These women may be told that they should have a labor induction or C-section at 39 weeks, solely because of their age. In this Evidence Based Birth® article, we will cover how many women give birth over the age of 35, the risks of pregnancy over the age of 35, and the history, guidelines, and research on induction and planned Cesarean for advanced maternal age.

This article was written by Rebecca Dekker, PhD, RN, APRN, Mimi Niles, CNM, MSN, MPH, PhD student, and Alicia A. Please read our Disclaimer and Terms of Use. Why is this important? Over the past four decades, there has been a dramatic increase in the number of women having their babies at age 35 and older. Today, 10% of babies in the U.S. were born to first-time mothers age 35 or older. 12 Things I Needed to Hear From the Doctor After My Miscarriage. I have miscarried two babies, Ruby in 2010 and Gus in 2015. 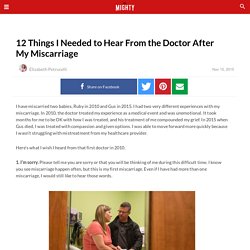 I had two very different experiences with my miscarriage. In 2010, the doctor treated my experience as a medical event and was unemotional. What Should I Put In My Birth Plan? 50 Moms Share Their Advice. For many mamas, a birth plan is a way to feel prepared for one of the most important events of our lives–the birth of our baby. 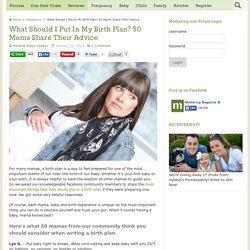 Whether it’s your first baby or your sixth, it is always helpful to have the wisdom of other mamas to guide you. So we asked our knowledgeable Facebook community members to share the most important things that they would put in a birth plan if they were preparing one now. We got some very helpful responses. Midwife’s Guide to an Intact Perineum. By Gloria Lemay An intact perineum is the goal of every birthing woman. 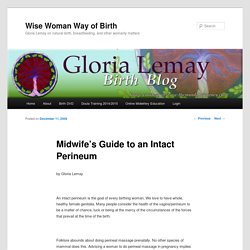 We love to have whole, healthy female genitalia. Many people consider the health of the vagina/perineum to be a matter of chance, luck or being at the mercy of the circumstances of the forces that prevail at the time of the birth. Folklore abounds about doing perineal massage prenatally. No other species of mammal does this. The intact perineum begins long before the day of the birth. 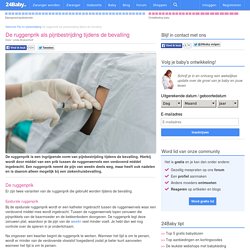 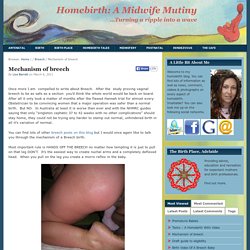 After the study proving vaginal breech to be as safe as a section you’d think the whole world would be back on board. After all it only took a matter of months after the flawed Hannah trial for almost every Obstetrician to be convincing women that a major operation was safer than a normal birth. But NO. The Effective Labour Contraction. One of my failings as a midwife is my inability to assess the strength and effectiveness of a uterine contraction. 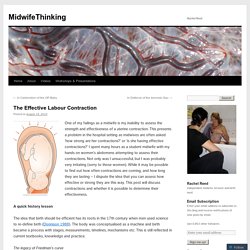 This presents a problem in the hospital setting as midwives are often asked ‘how strong are her contractions?’ Or ‘is she having effective contractions?’ Asynclitism: a well aligned baby or a tilted head? This post is a quickie. 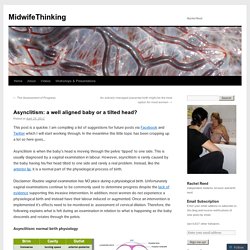 I am compiling a list of suggestions for future posts via Facebook and Twitter which I will start working through. In the meantime this little topic has been cropping up a lot so here goes… Asynclitism is when the baby’s head is moving through the pelvis ‘tipped’ to one side. This is usually diagnosed by a vaginal examination in labour.

AIMS-Ten-things. Safety of Homebirth ~ A Study from the Netherlands. The safety of homebirth is on the forefront of everyone’s mind – especially the critics. 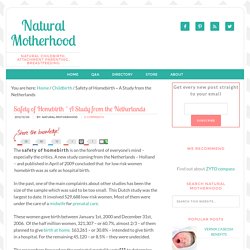 A new study coming from the Netherlands – Holland – and published in April of 2009 concluded that for low risk women homebirth was as safe as hospital birth. In the past, one of the main complaints about other studies has been the size of the sample which was said to be too small. This Dutch study was the largest to date. The Myth of a Vaginal Exam. Updated November 27, 2014. 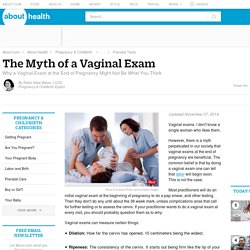 Vaginal exams. I don't know a single woman who likes them. However, there is a myth perpetuated in our society that vaginal exams at the end of pregnancy are beneficial. The common belief is that by doing a vaginal exam one can tell that labor will begin soon. This is not the case. Most practitioners will do an initial vaginal exam at the beginning of pregnancy to do a pap smear, and other testing. Low-risk pregnant women urged to avoid hospital births. Women with low-risk pregnancies are to be encouraged to have non-hospital births under new NHS guidelines, which could see almost half of mothers-to-be planning to deliver their baby away from traditional labour wards. Guidance from National Institute for Health and Care Excellence (Nice) says that midwife-led care has been shown to be safer for women and recommends that all women with low-risk pregnancies – 45% of the total – should be advised that giving birth in a midwifery-led unit, whether attached to a hospital or not, is “particularly suitable”.

The changes, published on Wednesday , have been made because women who give birth under midwife-led care have less chance of being asked to undergo medical interventions such as episiotomies, caesareans and use of forceps or ventouse. Susan Bewley, professor of complex obstetrics at King’s College, London, and chair of the Nice advisory group, added that infections were more common on hospital wards. 'Neem de regie over de bevalling niet weg bij de vrouw' Nuchal Cords: the perfect scapegoat. Edited and updated: July 2014 To get this blog going I decided to write about a slight obsession of mine: The fear of, and routine midwifery management of nuchal cords at birth (umbilical cord around the neck). I have written and presented about this topic and have bored the pants off many a person who has made the mistake of mentioning the subject. So, despite telling my colleagues that I had put away my ‘nuchal cord’ soap box I am bringing it out to launch this blog.

The content of this post is based on part of a literature review I carried out for my PhD thesis. If you are interested in finding out more you can download a journal article here, a poster here, or my full literature review in my thesis here. Cord Blood and your baby. Cord blood is often called “liquid gold” and may have the potential to save lives. Here are some options and considerations for banking cord blood in Australia. What is cord blood and how is it banked? Cord blood is the blood that remains in a baby’s umbilical cord and placenta after the baby is born and the cord has been cut. Cord blood includes potent stem cells, which are considered to be the building blocks of the body. Once the baby has been born and the umbilical cord has been clamped and cut, the remaining blood is drained into a special bag for potential use in the future for that baby - or it can be donated.

9 Surprising Facts About The Cord Around A Baby's Neck. A nuchal cord (cord around the neck) is one of many things that mothers-to-be fear about childbirth. The thought of their precious baby being ‘strangled’ by their umbilical cord can cause so much worry. Luckily, unborn babies get nutrients and oxygen via the umbilical cord, not by breathing it in through their nose and mouth, which may eliminate some fear right there. They don’t need their neck to breathe. Why Homebirth is 1,000 Times Safer Than Hospital Birth for Low Risk. Oft quoted research studies state 3X to 10X more babies die in the first week after low risk homebirth than hospital birth. In order for low risk homebirth to have higher perinatal mortality rates there would have to be a theory to explain this. There would have to be one or more complications of low risk homebirths that result in death in the first week that can be prevented by being in hospital, and death from these complications would have to occur more often than low risk deaths at planned hospital births.

The problem is... there is no explanation for why low risk newborns would have a higher rate of death in the first week after Planned Attended Homebirth than after Planned Hospital birth. All the studies that make this conclusion pretend to count low risk perinatal deaths but actually count other things. The rate of preventable perinatal deaths is no more than 1 per 10,000 low risk births for both home and hospital low risk births. Childbirth experts warn umbilical cords should not be cut for up to FIVE minutes. Clamping cord seconds after baby's arrival deprives it of vital bloodExperts say this can lead to iron deficiency and anaemia in later life By Lucy Osborne for the Daily Mail Published: 02:24 GMT, 26 April 2013 | Updated: 13:17 GMT, 26 April 2013 Cutting the umbilical cord too early is putting babies' health at risk, childbirth experts have warned.

Normal Physiologic Birth - Natural Motherhood. Swansea University experts find link between breastfeeding problems and injec... New research from Swansea University indicates mothers who receive medication after they have given birth to help them deliver the placenta are more likely to have difficulties breastfeeding than those who do not. Epidural Side Effects & Risks Of An Epidural In Labour via @sniply. Inside pregnancy: Labor and birth. Narrator: In the weeks before birth, your body slows down production of the hormone progesterone while increasing production of other hormones – including prostaglandins, which soften the cervix, and oxytocin, which triggers the uterine muscles to contract.

The rise of 'lotus births': How more mothers are leaving their baby's umbilical cord ATTACHED until it falls off ten days later. By Daily Mail Reporter Published: 21:20 GMT, 10 April 2013 | Updated: 12:25 GMT, 11 April 2013. 10 Things I Wish All Pregnant Women Knew About Birth - Aviva Romm. When I was pregnant, I seemed to be a magnet for birth war stories – cords around the neck, emergency cesareans, and more.

Campagne Normale Geboorte. Fasen van de bevalling. Is this pre-labour or labour? Cranio-Sacraal Baby / Child Work. My 7 Secrets to Getting Through Natural Birth. 10 Home Birth Tips for a Hospital Birth. No Food, No Drink During Labor? NO WAY! Meet the man trying to change the way women give birth around the world. How to Move from Pain to Pleasure in Childbirth and Beyond with Debra Pascali-Bonaro. The Birth Pause: Unhurrying the Moment of Meeting: The Birth Pause. How Do I Know Labor is Starting? Newborn blood, truth and advertising. Videos for Better Birth. 10 reasons to consider a home birth - NaturalNews.com.

Pregnancy & Newborn MagazinePregnancy & Newborn Magazine. The First Stage of Labor. Early Labor Signs. Preparing for a Freebirth/Unassisted Birth. The latest link between birth and autism - and why how we give birth matters - Your Life News - Best Daily. Evidence-based Birth. The natural caesarean: a woman-centred technique. AABC Position Statement: Immersion in Water during Labor and Birth.