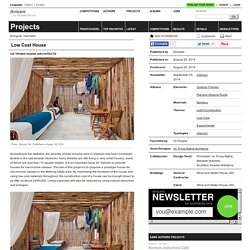 Published on August 28, 2014. According to the statistics, the quantity of total housing area in Vietnam has been increased tenfold in the last decade. However, many families are still living in very small houses, some of which are less than 10 square meters. It is an important issue for Vietnam to provide houses for low-income classes. Architect Vo Trong Nghia: Creativity stems from silent mind. VietNamNet Bridge – Famed Vietnamese architect Vo Trong Nghia said the true inspiration of creativity was nature and the secret to harmony is to silence the subconscious in order to hear what nature has to say. 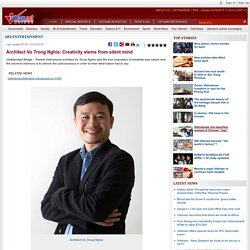 Nghia, 38, from central Quang Binh Province, has won many international awards for his environmentally friendly architecture, and it is the desire to give something back to nature that drives his work. Greening the city. Filmmaker: Nick Ahlmark Award-winning architect Vo Trong Nghia is on a mission to transform Vietnam's attitudes towards architecture and urban spaces through his environmentally sustainable buildings. 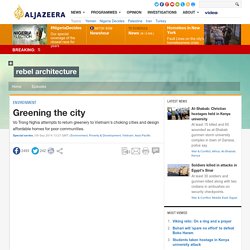 "Population explosion is a big problem in all Asian countries, especially when these countries have a tropical climate. But these countries don't have the knowledge to create architecture that suits their climate," he says. As Vietnam makes a mad dash for growth and development, Nghia is defending the need for open spaces, trying to bring scatterings of greenery to the concrete, glass and steel that dominate the cityscapes. His buildings incorporate plants and trees, and include design elements such as natural air flow ventilation in the place of costly and environmentally damaging air conditioning. "Green architecture helps people live harmoniously with nature and elevates human life by embracing the powers of the sun, wind and water into living space. Vo Trong Nghia's low-cost house "withstands natural disasters"

Vo Trong Nghia Architects has presented its third prototype for low-cost housing in Vietnam, which combines the lightweight structure of the first model with the durability of the second (+ slideshow). 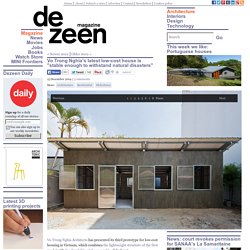 Seeking to find a solution to the country's housing crisis, the Vietnamese firm first started working on the S House project in 2012. The aim is to develop a template for affordable permanent dwellings in the Mekong Delta area. The first prototype was for a lightweight steel-framed home, while the second was built from precast concrete to offer greater long-term stability. This third iteration combines reinforced concrete foundations with a steel frame and steel lattice walls. 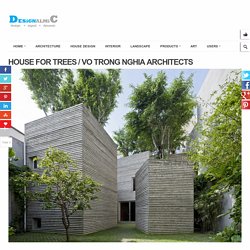 A new family residence by Vo Trong Nghia Architects in Vietnam’s capital city, The house not only gives up part of the surface of the lot to create a garden, going against the trend of maximising land use, but returns to the vegetation the space occupied by the footprint of the house with a green roof. © Hiroyuki Oki “House for trees” is the project to solve problem about urban pollution and lack of greenery in big crowded cities in Vietnam such as Ho Chi Minh City and Hanoi. Five concrete volumes are designed as “pots” to plant large tropical trees on their tops, giving fresh air and green space for the whole house, reducing energy consumption, connecting with nature and letting the owner feel relaxed out of daily stress. 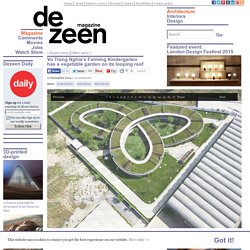 Named Farming Kindergarten, the preschool is located in Dong Nai, just outside Ho Chi Min City. With facilities for up to 500 pupils, it was designed by Vo Trong Nghia Architects for children whose parents work at the neighbouring shoe factory. Despite a tight budget, the Vietnamese architects wanted the building to become a prototype for sustainable school design, where children can learn how to grow their own food. Vo Trong Nghia's Son La Restaurant hides a "bamboo forest" World Architecture Festival 2014: clustered lengths of bamboo create a forest of columns in the open-air dining room of this Vietnam restaurant by Vo Trong Nghia Architects (+ slideshow). 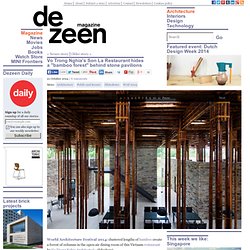 The Son La Restaurant, which won the hotel and leisure category at the World Architecture Festival earlier this month, was designed by Vietnamese firm Vo Trong Nghia Architects for a new hotel resort in the country's picturesque Son La Province. Precarious cliff roads provide the only access to the site from Hanoi, the nearest city, so the architects had to develop a design that could be easily constructed by local builders using materials that are readily available nearby. "Due to difficult terrain, Son La is only accessible from Hanoi by a seven-hour car trip," said the architect team. "With this situation, local bamboo and stonework were selected to be the main materials of the building. " Vo Trong Nghia unveils second prototype for low-cost Vietnam housing. Vo Trong Nghia Architects has revealed its second-phase prototype for an affordable and low-maintenance dwelling for Vietnam, as part of a project aimed at solving the country's housing crisis (+ slideshow). 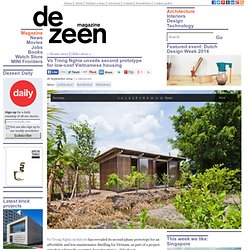 The new prototype, known as S House, has been unveiled by Vo Trong Nghia Architects two years after the Vietnamese firm presented its first low-cost buildings, which were designed to offer permanent residences for less than £2,500 each. While the original design featured a lightweight steel frame, the new structure is built from precast concrete, which the architects believe offers greater long-term stability. "The concept of the second prototype is to combine modular components and DIY strategy," they said. "The lightweight structure allows smaller foundations and transportability by small boats, since waterways are still the dominant transportation in Mekong Delta. " Vo Trong Nghia's chequerboard university building underway in Vietnam.

News: construction is now underway on a building designed by Vietnamese firm Vo Trong Nghia Architects for a technical university near Hanoi, featuring a chequerboard facade of concrete slabs and tree-filled balconies (+ slideshow). 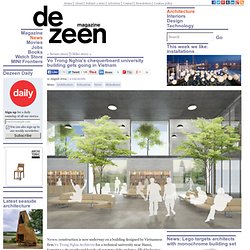 The new building will function as a gateway to FPT Technical University, and is the first phase in a masterplan to upgrade the facilities of the private institution that was only established in 2006. According to Vo Trong Nghia Architects, the structure is intended to promote sustainable development in Vietnam, in response to rapid industrialisation that causes frequent power shortages, increasing temperatures, high levels of pollution and reduced green space. "It is our goal to create a green university building that counters these problems as well as instils sustainable practices to these future generations," said the design team. 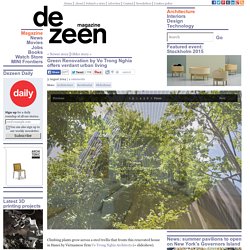 Concerned about Vietnam's rapid urban development, Vo Trong Nghia Architects wanted to create an example of how greenery could be incorporated back into the city. A dark, damp, 15-year-old house in Hanoi city centre in need of renovation provided a canvas for the studio to demonstrate how similar properties across the metropolis could be revived with foliage and light. "Greenfall Renovation was designed against this backdrop, returning greenery to the city and encouraging a comfortable living environment to both the resident and the neighbours," said the architects. Situated on a rectangular corner plot, the shorter side of the building fronts a main street and the longer edge runs along an alleyway. Vo Trong Nghia unveils bamboo domes under construction in Vietnam. Two intricate bamboo domes form part of this community centre under construction in Ho Chi Minh City, by Vietnamese firm and bamboo exponent Vo Trong Nghia Architects (+ slideshow).

Located on an artificial islet in the east of the city, the Diamond Island Community Hall will eventually comprise eight bamboo domes, designed by Vo Trong Nhia Architects to provide flexible events spaces for local residents. So far two of the 24-metre-wide domes have their structural framework in place, creating a woven lattice made up of clusters of bamboo stalks. The design team describes the appearance as "a fusion of traditional folk art and contemporary architecture". In an interview with Dezeen this week, Vo Trong Nghia explained how he believes that bamboo is "the green steel of the 21st century". "I think bamboo and laminated bamboo will replace other materials," he said. Set to complete in October, the community centre will accommodate conferences, meetings, children's activities and parties.

Vo Trong Nghia adds brick and bamboo to Vietnam factory interior. The second recent project from Vietnamese studio Vo Trong Nghia Architects is this renovation of a garment factory in Ho Chi Minh City that now features a hanging bamboo ceiling concealing mechanical equipment (+ slideshow). Vo Trong Nghia Architects, who also recently completed a concrete house with trees on the rooftops, was asked to create an identity for Viet Vuong that would set them apart from the 4,000 other manufacturers of export clothing in Vietnam. "The aim of the project is to redefine the company's identity through renovation in order to stand out among their competitors," said the design team.

The largest space is known as the Stone Hall, as it surrounded by ridged walls made up of basalt stone slabs. Some of the slabs have been polished, while others have been either hammered or left raw. "These stone slabs have different surfaces, creating both dignified and delicate spatial characteristics, which are well suited to festive ceremonies," said the architects. Binh Thanh House by Vo Trong Nghia and Sanuki + Nishizawa. Vietnamese studio Vo Trong Nghia Architects has completed a house in Ho Chi Minh City with half of its floors screened behind hollow concrete blocks and the other half exposed to the elements (+ slideshow).

Named Stacking Green, the building won the award in the house category at the World Architecture Festival in Singapore earlier this month and is located in Ho Chi Minh City. "In Vietnam we have many problems with energy and electricity, it can stop many times a day," Nghia tells Dezeen editor-in-chief Marcus Fairs. During these times light is able to filter into the house through the inner wall of glazing, but the twelve layers of plants in front prevent direct sunlight from passing through and increasing the internal temperature. Natural ventilation also comes through this planted facade. See all our stories about WAF 2012 » Wind and Water Bar by Vo Trong Nghia. Binh Duong School by Vo Trong Nghia. Stacking Green house covered in plants by Vo Trong Nghia. Rebel Architecture - Greening the city. Vo Trong Nghia's low-cost house "withstands natural disasters" Low Cost House by Vo Trong Nghia Architects. Vo Trong Nghia's Farming Kindergarten has a garden on its looping roof.

A Bamboo House That Weathers Storms. Every year, floods, storms, and landslides plague Vietnam’s cities and countryside. These natural disasters, though not always devastating enough to attract international media, take a toll on the country, wreaking damages that are above the world average. In economic terms, Vietnam loses 1.2% of its annual GDP to mother nature, while large areas of development are swept away. Then, of course, there’s the human cost, which can peak around 500 casualties, with several thousand more forced to live in extreme circumstances after the fact.

For Hanoi-based H&P Architects, there is a viable architectural solution to this urgent problem. They have produced a new housing prototype capable of withstanding floods and powerful rainstorms and nimble enough to be assembled in about 25 days and for as little as $2,500. The structure consists of cubic bamboo-framed bays stacked side-by-side and pinned down by steel poles and recycled oil drums.