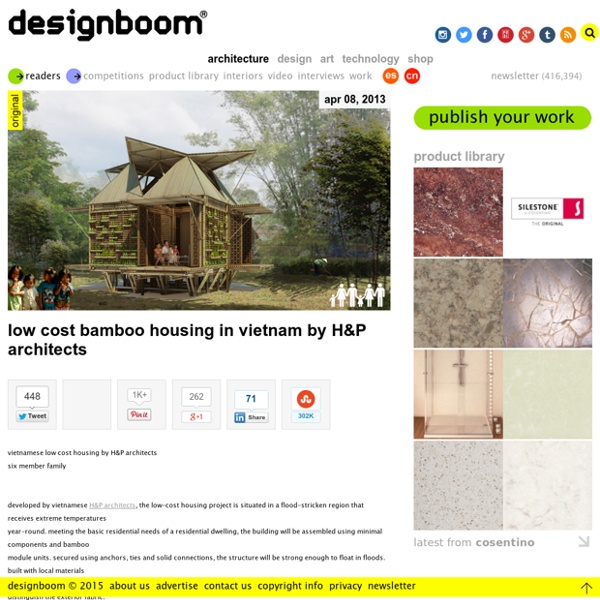 A Bamboo House That Weathers Storms Every year, floods, storms, and landslides plague Vietnam’s cities and countryside. These natural disasters, though not always devastating enough to attract international media, take a toll on the country, wreaking damages that are above the world average. In economic terms, Vietnam loses 1.2% of its annual GDP to mother nature, while large areas of development are swept away. Then, of course, there’s the human cost, which can peak around 500 casualties, with several thousand more forced to live in extreme circumstances after the fact. For Hanoi-based H&P Architects, there is a viable architectural solution to this urgent problem.

Coconut-Shaped Bamboo Dome Built Without a Single Nail Bamboo building virtuoso Vo Trong Nghia designed and constructed the gorgeous bamboo Water and Wind Cafe in the Binh Duong province of Vietnam. Not only does the domed structure the versatility and strength of bamboo, which is a rapid-growing renewable material, it was also built without the use of even one nail! We’ve seen other bamboo buildings before but what makes Nghia’s stand out is the dynamic domed shapes he is able to achieve with the material – especially without the use of modern machinery or metal structures. In fact, every bit of bamboo in the design was woven together using traditional Vietnamese weaving techniques. The cafe’s frame measures 30 feet high and features an opening at the very top of the dome that allows daylight to stream inside.

Learn to read Russian in 15 minutes (Yes, for real. I thought it was a joke at first, too.) Here’s a really interesting and surprisingly simple breakdown of the Russian alphabet from writer Peter Starr Northrop and cartoonist Ryan Estrada. Give it a few minutes of your time and you’ll be confidently sounding out Russian words by the end. Next up: Learning what those words mean.

Stacking Green house covered in plants by Vo Trong Nghia A dozen layers of concrete planters create a vertical garden on the facade of this house in Ho Chi Minh City by Vietnamese architects Vo Trong Nghia. Built for a couple and one of their mothers, the building is 20m deep but just 4m wide, typical of the narrow but long 'tube houses' common in Vietnam. Concrete planters span between the side walls to cover the front and back facades, and are spaced according to the height of the plants. At the rear of the house, an exterior staircase is positioned between the planters and the back wall, while glazing separates the front of the house from the plants. Automatic irrigation pipes fitted inside the planters allow for easy watering and maintenance.

For Rent: Your Own Bamboo Palace by the Great Wall Older For Rent: Your Own Bamboo Palace by the Great Wall by Margot Guralnick Issue 4 · Chinese New Year · January 31, 2014 Newer Issue 4 · Chinese New Year · January 31, 2014 A tip from my Travel + Leisure hotline: If seeing the Great Wall of China is at the top of your bucket list, you can stay practically within touching distance of i, and in great style, at Commune by the Great Wall. KN House / Adrei-studio Architecture Architects: Adrei-studio Architecture Location: Tứ Liên, Tây Hồ, Hanoi, Vietnam Photographs: Courtesy of Adrei-studio Architecture From the architect. The Client is a guitarist who is born and grows up in Hanoi – the capital of Vietnam. He would like to own a living space that reflects the nature of housing of Hanoian as well as the artistic and liberal character in his human, however, the construction budget is very small (approximately $15,000.00). That is the reason why we face difficulties in building the house, but we still do not give up because of the ideas, the messages we want to convey to people via this process. Every feeling comes from its images, architectural details used in the traditional housing architecture of Vietnam in general and the old Hanoi in particular (entrance, door, stair, …) that we has refined and designed in order to achieve an introversive, multi-layered, close-to-nature space.

Mr. X by Carl Sagan by Carl Sagan It all began about ten years ago. I had reached a considerably more relaxed period in my life - a time when I had come to feel that there was more to living than science, a time of awakening of my social consciousness and amiability, a time when I was open to new experiences. I had become friendly with a group of people who occasionally smoked cannabis, irregularly, but with evident pleasure. Binh Duong School by Vo Trong Nghia Caged balconies provide open-air corridors that are sheltered from harsh sunlight and tropical rain at this school in Vietnam by architects Vo Trong Nghia. Vertical concrete louvres and perforated screens create the cage-like facade, which shades the corridors from direct sunlight whilst letting in the breeze. The entire school is contained within a single five-storey building to keep both students and teachers dry during the rainy summer season. The walls of the building are curved to snake around two courtyards and the roof slopes up gradually from the ground to the top floor.

25 Websites that will make you a Genius. Websites Educational 1. Khan Academy Have you ever wanted to pick up a subject you’re not well-versed in, but you didn’t have the money to invest in a college course? Khan Academy aims to provide education at the collegiate level for anyone who wants it. Wind and Water Bar by Vo Trong Nghia Vietnamese architects Vo Trong Nghia have constructed a thatched bamboo dome at the centre of a lake in Binh Duong Province (+ slideshow). Above: photograph is by Phan Quang Stepping stones lead across the water and inside the Wind and Water Bar, which is used as a venue for music performances, local meetings and other events.