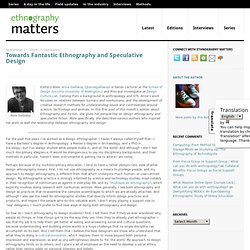 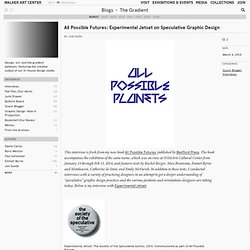 The book accompanies the exhibition of the same name, which was on view at SOMArts Cultural Center from January 14 through Feb 13, 2014, and features texts by Rachel Berger, Max Bruinsma, Emmet Byrne and Metahaven, Catherine de Smet, and Emily McVarish. In addition to these texts, I conducted interviews with a variety of practicing designers in an attempt to get a deeper understanding of “speculative” graphic design practices and the various positions and orientations designers are taking today. Below is my interview with Experimental Jetset. Experimental Jetset, The Society of the Speculative button, 2014. Fibreculture Journal: 20. Design Fiction: “Speculative Everything” by Dunne & Raby. Design Fiction: “Speculative Everything” by Anthony Dunne and Fiona Raby Since its subject is ‘everything,’ “Speculative Everything” says a lot. 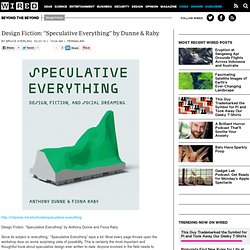 Most every page throws open the workshop door on some surprising vista of possibility. This is certainly the most important and thoughtful book about speculative design ever written to date. Anyone involved in the field needs to own this book and study it with care. It’s been five years since the appearance of the seminal Dunne and Raby video, “Technological Dream Series No 1: Robots.” FCJ-142 Spectacles and Tropes: Speculative Design and Contemporary Food Cultures. Carl DiSalvoGeorgia Institute of Technology, Atlanta. 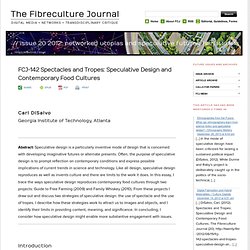 Questioning the “critical” in Speculative & Critical Design — Designing the Future. Speculative design. Speculative Design – A Race to What? At the next instalment of RMIT’s SOL:ID lecture series, on Friday 13 September, three leading thinkers in speculative design, Roland Snooks (Kokkugia), Harry Lee (game developer, Freeplay games festival) and Ammon Beyerle (Eurisko), will critically reflect on their own practices and audience questions as they grapple with the topic. 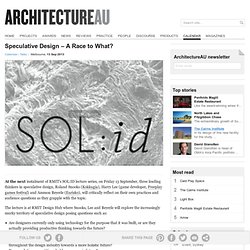 The lecture is at RMIT Design Hub where Snooks, Lee and Beyerle will explore the increasingly murky territory of speculative design posing questions such as: Are designers currently only using technology for the purpose that it was built, or are they actually providing productive thinking towards the future? Speculative fiction. History[edit] In mythography the concept of speculative fiction has been termed "mythopoesis" or mythopoeia, "fictional speculation", the creative design and generation of lore, regarding such works as J.R.R. 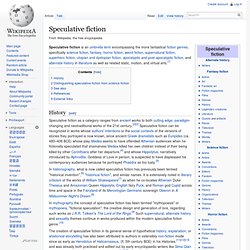 Tolkien's The Lord of the Rings.[9] Such supernatural, alternate history and sexuality themes continue in works produced within the modern speculative fiction genre.[10] The creation of speculative fiction in its general sense of hypothetical history, explanation, or ahistorical storytelling has also been attributed to authors in ostensibly non-fiction mode since as early as Herodotus of Halicarnassus, (fl. 5th century BCE) in his Histories,[11][12][13] and was already both practiced and edited out by early encyclopaedic writers like Sima Qian (ca. 145 or 135 BCE–86 BCE), author of Shiji.[14][15] In its English language usage in arts and literature since 20th century, "speculative fiction" as a genre term is often attributed to Robert A.

Heinlein. See also[edit] History Genres Themes. Speculative Design: Playing Devil's Advocate. Speculative designs that escape from conventional capitalist systems offer visonary directions forward At least according to its dictionary definition, design is a straightforward process with an unambiguous objective: to ‘do or plan something with a specific purpose in mind’. 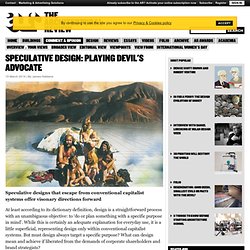 While this is certainly an adequate explanation for everyday use, it is a little superficial, representing design only within conventional capitalist systems. But must design always target a specific purpose? What can design mean and achieve if liberated from the demands of corporate shareholders and brand strategists? Since the 1960s, a number of irreverent ‘speculative designers’ have explored the potential of such emancipated practice.

Clive Sinclair in his C5 tricycle, which was voted one of the ‘biggest innovation disasters’ of all time Consider the example of British designer Clive Sinclair’s infamous C5: a flopped concept for a battery-assisted personal urban tricycle (how much more radical does it get?). Speculative Fiction, Speculative Design: Observatory: Design Observer. England Swings SF, Doubleday, 1968 I had barely walked into Out of This World: Science Fiction But Not As You Know It, an exhibition at the British Library in London, when I noticed a book cover that blew me away. 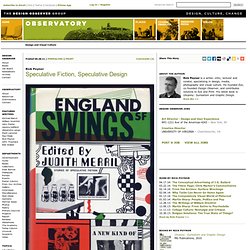 I present it here for your enjoyment, or perhaps your dismissal. Never having seen this strange dust jacket before, I immediately wanted to know who designed it. England Swings SF, Judith Merril’s collection of “speculative fiction” by writers from SF’s “British” new wave, was published in 1968 by Doubleday in New York. But there is no information about the cover’s creator in the exhibition (the curators focus on the authors) and when I googled the collection later, I could find only two images of the book. I’ll come back to the designer, but let’s treat the England Swings SF cover as the work of “anonymous” for a few moments longer.