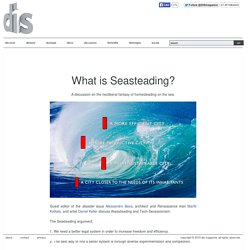 The Seasteading argument: 1. We need a better legal system in order to increase freedom and efficiency. 2. The best way to find a better system is through diverse experimentation and competition. 3. 4. 6. Daniel Keller: Seasteading is a portmanteau of Sea and homesteading. Libertarians argue that the Federal government should consider itself a ‘public option’ provider of “citizen experience” in the governance industry, and open the market to competing options. Design a Floating City and Get Paid. Design a Floating City and Get Paid The Seasteading Institute initiates an architectural design contest for a floating city project. 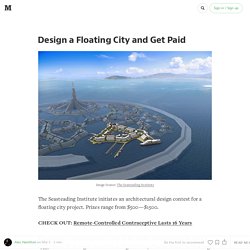 Prizes range from $500 — $1500. Floating on the dock of the bay: Izmir's clever solution to a wasted waterfront. For months, three architects would meet at the waterfront of Izmir, Turkey’s third-largest city. 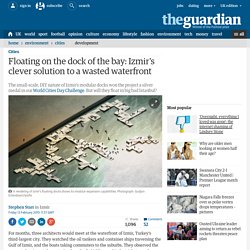 They watched the oil tankers and container ships traversing the Gulf of Izmir, and the boats taking commuters to the suburbs. They observed the concrete barriers at the water’s edge, the forbidding and industrial atmosphere, and the highway that separates water from city. But they also saw the way pedestrians would stroll on what little space was available to them, feeding pigeons, eating sunflower seeds and taking photos of the bay’s dramatic sunsets. Eventually it came to them – if you really wanted to bring people in Izmir together, transform the waterfront.

Floating Cities Could Be A Reality Within Decades. It's hard to imagine, but it's not just a pipe dream. 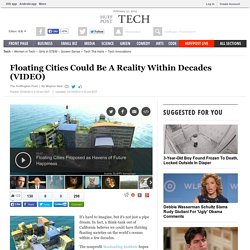 Seasteading Institute Convenes In San Francisco: Group Fights For Floating Cities (PHOTOS) Northern California has always been on the lookout for Utopian societies. 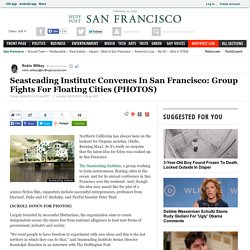 (Hello, Burning Man). So it's really no surprise that the latest idea for Eden was cooked up in San Francisco. The Seasteading Institute, a group working to form autonomous, floating cities in the ocean, met for its annual conference in San Francisco over the weekend. And, though the idea may sound like the plot of a science fiction film, supporters include successful entrepreneurs, professors from Harvard, Duke and UC Berkeley, and PayPal founder Peter Thiel. 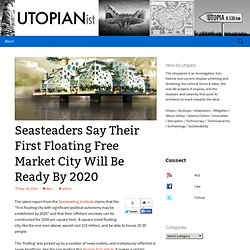 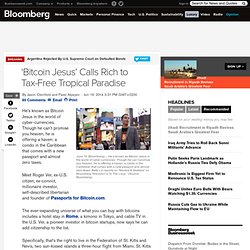 Though he can’t promise you heaven, he is offering a haven: a condo in the Caribbean that comes with a new passport and almost zero taxes. Meet Roger Ver, ex-U.S. citizen, ex-convict, millionaire investor, self-described libertarian and founder of Passports for Bitcoin.com. The ever-expanding universe of what you can buy with bitcoins includes a hotel stay in Rome, a kimono in Tokyo, and cable TV in the U.S. China looking seriously at creating artificial islands that near the scale of Manhattan as they also literally level Mountains for City Space.

A new floating city designed by AT Design Office and the Chinese construction firm CCCC, is slated to begin development on a pilot scale next year. 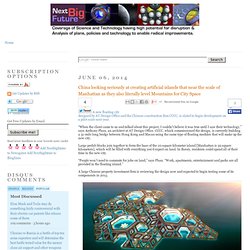 “When the client came to us and talked about this project, I couldn’t believe it was true until I saw their technology,” says Anthony Phan, an architect at AT Design Office. CCCC, which commissioned the design, is currently building a 31-mile long bridge between Hong Kong and Macau using the same type of floating modules that will make up the new city. Large prefab blocks join together to form the base of the 10-square kilometer island [Manhattan is 59 square kilometers], which will be filled with everything you'd expect on land. Floating Utopias for the Age of Rising Seas. A two mile-thick ice sheet in Antarctica is collapsing, which all but guarantees at least 10 feet of global sea level rise. 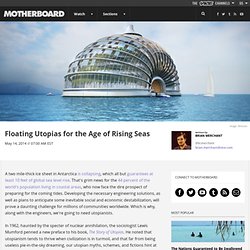 That's grim news for the 44 percent of the world's population living in coastal areas, who now face the dire prospect of preparing for the coming tides. Developing the necessary engineering solutions, as well as plans to anticipate some inevitable social and economic destabilization, will prove a daunting challenge for millions of communities worldwide. Which is why, along with the engineers, we're going to need utopianists. Floating Cities: 15 Last-Hope Homes for a Watery World - WebEcoist.

With so many visions of humanity’s future involving the devastating effects of climate change, architects are looking toward a life without land: entire self-contained cities purposefully built on water complete with housing, schools, hospitals, restaurants and shops. 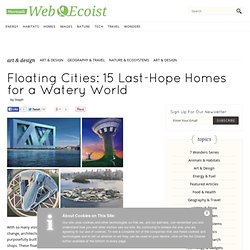 These floating city concepts range from recycled oil rigs to what could be the largest structure ever built (if we ever discover a material strong enough to bear the weight, that is.) Embassy of Drowned Nations (images via: oculus) As sea levels rise, it seems that some nations will inevitably sink beneath the depths, leaving behind thousands or perhaps millions of displaced residents. We may hope that the Embassy of Drowned Nations is never actually needed, but time will tell. Seasteaders Say Their First Floating Free Market City Will Be Ready By 2020. Video - Top 5 things to know about the Floating CIty Project, Feb 2014. Giant ‘Ark’ Designed to Preserve Humans, Protect Nature. In the not-so distant future, us humanfolk may have to cohabitate with a much less friendly mother nature. But such is the genius of man that he can design a home that will keep him comfortable, even as his behavior causes the climate to grow ever warmer and more prone to extreme storms, desertification to eat away the greenery, and sea levels to rise.

Floating City concept by AT Design Office features underwater roads. Silicon Valley's Next Disruption: Floating, Autonomous City-States. A render of a future Blueseed ship, via Blueseed It’s a sunny Tuesday afternoon in Palo Alto, and seasteading entrepreneur Max Marty is trying to persuade me that putting 1,500 immigrant entrepreneurs together on a floating startup city in international waters 12 miles off the coast of San Francisco is a good idea. “The exchange of ideas and collaboration is really, really helpful in the creation of new technologies and innovations,” Marty tells me.