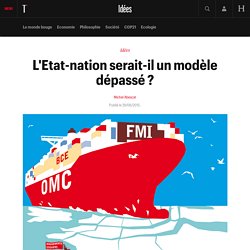 De nouveaux types de citoyenneté émergent. Enlargement and the Finality of European Integration. <P>Your browser does not support script</P> Title|Previous|Next Fischer assumes that exclusion of Eastern European nations from more advanced forms of integration is only a temporary phenomenon. 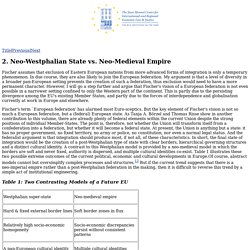 Iraq may not have the will to survive – and that’s not even the biggest problem. Airy talk of sending in troops distracts us from the hard work and tough thinking necessary to secure the international order War is a contest of wills. 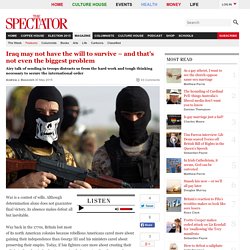 Although determination alone does not guarantee final victory, its absence makes defeat all but inevitable. Way back in the 1770s, Britain lost most of its north American colonies because rebellious Americans cared more about gaining their independence than George III and his ministers cared about preserving their empire. Paramilitary volunteer groups surge in popularity in Eastern Europe. Thousands of ordinary civilians, including doctors, carpenters and teachers, are flocking to join volunteer paramilitary groups in several European countries, with some doubling in size since the start of the Ukraine crisis, Newsweek has discovered. 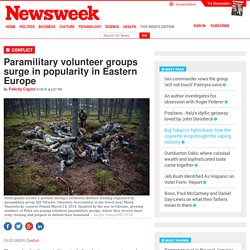 In Estonia, Lithuania, Sweden and Poland, volunteer defence leagues, many of whom train with real weapons and would be called upon to support the army in the event of a conflict, are seeing record numbers of ordinary civilians joining up. Finland's military sent out letters to all 900,000 of its former conscripts at the beginning of this month, informing them of what their roles would be in a "crisis situation". Earlier this year, the Polish parliamentary speaker announced that parliamentarians will be offered the opportunity to train at an army firing range and that though the cut off age for the Polish military is 50, there would be exceptions for "healthy and youthful-looking" MPs.

A Post-Westphalian Caliphate? Deconstructing ISIS Ambitions. CAIRO — Since the group known as the Islamic State of Iraq and Syria (ISIS) declared a caliphate, much has been written about the movement — but still more remains unclear. 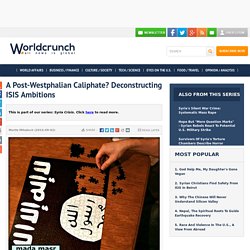 How seriously should we take their rise? How does ISIS define Islamic law, and how would it be implemented? Expanding e-residency: Estonia moves closer to being borderless - Factor. Designing and creating robots is not a simple job, and creating one that can be used on another planet comes with even more challenges. 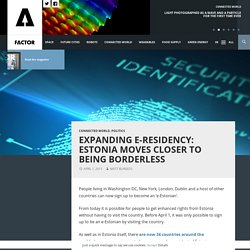 However, NASA has revealed detailed designs behind one of the crucial components to creating its human-like space robots. In a patent, which was recently published on NASA’s website, the space organisation details the complex construction of a robot’s finger. Why the internet of things could destroy the welfare state. On 24 August 1965 Gloria Placente, a 34-year-old resident of Queens, New York, was driving to Orchard Beach in the Bronx. 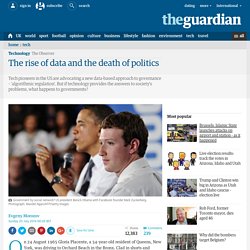 Clad in shorts and sunglasses, the housewife was looking forward to quiet time at the beach. But the moment she crossed the Willis Avenue bridge in her Chevrolet Corvair, Placente was surrounded by a dozen patrolmen. There were also 125 reporters, eager to witness the launch of New York police department's Operation Corral – an acronym for Computer Oriented Retrieval of Auto Larcenists. The three constituent elements of the Decentralized Computing Revolution. Excerpted from Gary Sharma: “There are three technologies that will form the foundation of the decentralized computing stack — mesh networks (decentralized networking), block chain (decentralized transactions) and autonomous agents (decentralized decision making). * Mesh networks The traditional network architecture of the Internet is vulnerable. 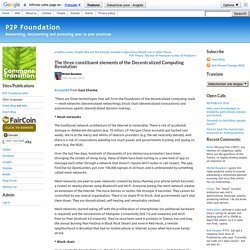 The Great Transformation of our Time: Hans Abrahamsson. The Future of War: Adios, Clausewitz. By Justin Lynch Best Defense guest columnist “War therefore is an act of violence to compel our opponent to fulfil our will.” – Carl Von Clausewitz In a white, perfectly circular rotunda at the Reagan International Trade Center, military officials and foreign policy experts gathered at the New America/ASU Future of War Conference. 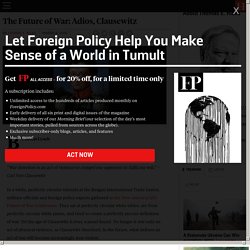 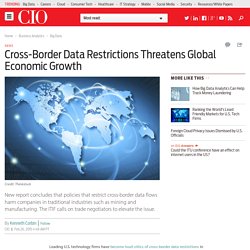 Trade Policy ] Featured Resource. Silicon Valley likes to promise ‘digital socialism’ – but it is selling a fairy tale. "Beyond the Sovereign State: Isopolitan Citizenship, Race, and Anglo-American Union," Political Studies, 62 (2014) BITNATION @ The Keiser Report. Welcome to Bitnation. A different cluetrain. A new Google-powered website lets you compare every constitution in the world and write your own. SuddenlySnowden comments on We are Edward Snowden, Laura Poitras and Glenn Greenwald from the Oscar-winning documentary CITIZENFOUR. AUAA.

iKnow WI-WE Bank : WI-WE Bank. Peace-building in a post-Westphalian age - Defence Viewpoints from UK Defence Forum. Peace-building in a post-Westphalian age: geopolitics on the species scale - by David Hoghton-Carter, UKDF Research Associate. Dismantling Empires Through Devolution. Democracy is not the most potent political force of the 21st century. Last week, the world’s most globe-spanning empire until the mid-20th century let its fate be decided by 3.6 million voters in Scotland. While Great Britain narrowly salvaged its nominal unity, the episode offered an important reminder: The 21st century’s strongest political force is not democracy but devolution. Before the vote was cast, British Prime Minister David Cameron and his team were so worried by voter sentiment swinging toward Scottish independence that they promised a raft of additional powers to Edinburgh (and Wales and Northern Ireland) such as the right to set its own tax rates—granting even more concessions than Scotland’s own parliament had demanded.

Scotland won before it lost. Estonia's digital residency clicks with Indian entrepreneurs. Offshore babies: The murky world of transnational surrogacy. The case of an Australian couple accused of abandoning their child with his Thai surrogate mother after discovering he had Down syndrome — and taking home his healthy twin — has turned global attention to the murky underworld of international surrogacy. Such cases have raised ethical and legal dilemmas, which experts say are the inevitable consequences of an unregulated multibillion-dollar industry dependent on impoverished women in developing countries providing a “product” — a child — so desperately wanted by would-be parents in wealthier nations.

In Baby Gammy’s case, which made international headlines this month, the boy’s Australian parents are claiming that the Thai surrogate mother, Pattaramon Chanbua, refused to release the child into their custody and that they lacked the legal right to force her to do so. Foreign-owned mines operate royalty-free under outdated US law. Cybertopia - Dreams of Silicon Valley (VPRO, Marije Meerman) Disposable Life - Slavoj Zizek. Don't blame Westphalia. Robert Cooper: the new liberal imperialism. The New Materialsm. General: Border crisis threatens U.S. existence. Text smaller Text bigger Marine Corps Gen. John Kelly America’s porous southern border and the recent surge in illegal immigration is more than just a “humanitarian crisis,” claims the top U.S. general in charge of Central and South America, it’s a threat to the United States’ very existence.

Introduction. The 25 most failed states on Earth. Which post-Westphalia? International organizations between constitutionalism and authoritarianism. The World Health Organization’s response to Ebola: The devil in dealing with post-Westphalian pathogens is not (only) in the detail. Lobby group unveils plans for 'Catalan army'