How Mongolian Herders Are Transforming Nomadic Pastoralism. Mongolia is the country of endless plains and eternal blue skies. 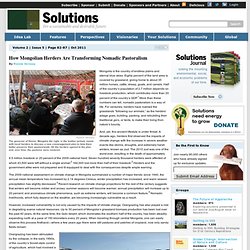 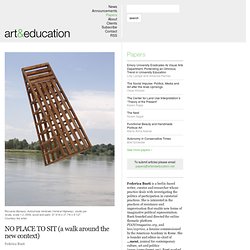 Remarks on modernity, mobility, nomadism and the arts by Dr Michael Haerdter. There’s nothing new about the fact that the world is in motion. 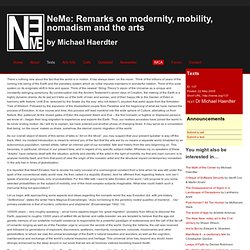 It has always been ‘on the move’. Think of the billions of years of the coming into being of the Earth and the planetary system which an initial impulse maintains in wonderful rotation. Think of this solar system on its enigmatic shift in time and space. Think of the newest “String Theory“s vision of the Universe as a unique and constantly swinging symphony. By condensation into the Ancient Testament’s seven days of Creation, the making of the Earth is a highly dynamic drama. As our overall object of desire of this series of talks is “Art on the Move”, you may suspect that your present speaker is way off the track.

It is reported that Albert Einstein had to revoke his early concept of a cosmological constant from a time when he was still under the spell of the conventional static world view. Let us begin with approaching some aspects and ideas regarding the nomadic world the way Evolution did, with pre-history. Contemporary Nomadism: Autonomy & Technology in the North < Experience & Learning. Subsection navigation Contempory Nomadism: Autonomy & Technology in the North, Photograghy Paul Glen Marko Peljhan, Matthew Biederman Canada HouseTrafalgar Square (entrance in Pall Mall East)London, SW1Y 5BJ 20/05/2010 Thursday 20 May 2010, 4.30 – 6.30pm Arctic Perspective Initiative international partners talk about the project that has lead to the exhibition Media. 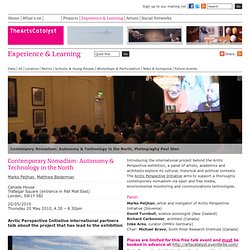 Hybrid futures Knowmads and the Notion state. Or The rise of the Cyber Unified Civilization (part 4) “Today, after over fifteen years of planning, construction, delays and drama, the Large Hadron Collider began doing what it was built to do: colliding particles. 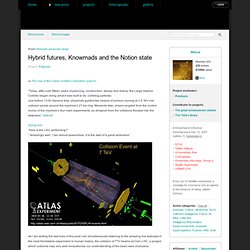 Just before 13:00 Geneva time, physicists guided two beams of protons moving at 3.5 TeV into collision points around the machine's 27 km ring. Hybrid futures, Knowmads and the Notion state « Forums. Or The rise of the Cyber Unified Civilization (part 4) “Today, after over fifteen years of planning, construction, delays and drama, the Large Hadron Collider began doing what it was built to do: colliding particles. 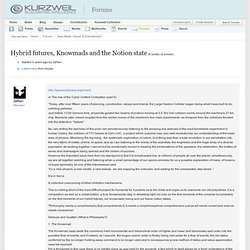 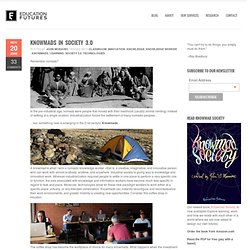 In the pre-industrial age, nomads were people that moved with their livelihood (usually animal herding) instead of settling at a single location. Industrialization forced the settlement of many nomadic peoples… …but, something new is emerging in the 21st century: Knowmads. A knowmad is what I term a nomadic knowledge worker –that is, a creative, imaginative, and innovative person who can work with almost anybody, anytime, and anywhere. Industrial society is giving way to knowledge and innovation work. The coffee shop has become the workplace of choice for many knowmads. The remixing of places and social relationships is also impacting education. Who are these knowmads in Society 3.0? Urban Nomad 2.0: One Year in a Microhouse - Culture. We've done a bit of microhousing (and micro-driving) coverage of late, and here's some more. 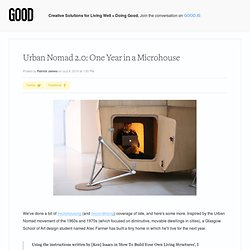 Inspired by the Urban Nomad movement of the 1960s and 1970s (which focused on diminutive, movable dwellings in cities), a Glasgow School of Art design student named Alec Farmer has built a tiny home in which he'll live for the next year. Using the instructions written by [Ken] Isaacs in 'How To Build Your Own Living Structures', I have created a replica of this 50 year old design, and plan to live in it, in the centre of Glasgow, Scotland, for one year. In doing so I hope to gain more insight into Isaacs design, and also into the movement as a whole. I move in at the start of September 2010. Farmer describes the work of Isaacs as "smaller than architecture but bigger than furniture," and that sounds about right. The Cricket Trailer. As the dog days of summer wrap around us, it’s hard to even think that sooner than later it’s going to start getting cooler out. 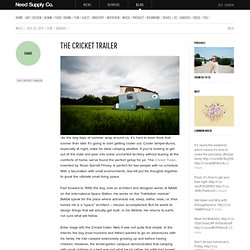 Cooler temperatures, especially at night, make for ideal camping weather. If you’re looking to get out of the state and peer into some uncharted territory without leaving all the comforts of home, we’ve found the perfect getup for ya’. The Cricket Trailer, invented by Texan Garrett Finney, is perfect for two people with no schedule. With a fascination with small environments, Garrett put his thoughts together to great the ultimate small living space. Fast forward to 1999, the boy, now an architect and designer works at NASA on the International Space Station.