Over population, over consumption - in pictures. Guarding rhino. Golden Triangle A Haven For Peddlers Of Endangered Species' Meat, Body Parts: Report. The Golden Triangle Special Economic Zone in Laos, located along its border with Myanmar and Thailand, has become an “illegal playground” where endangered wild animals are brazenly sold in the open, according to a report by the London-based Environmental Investigation Agency (EIA). 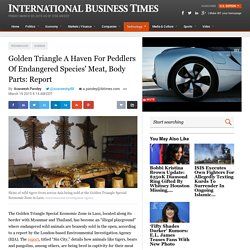 The report, titled “Sin City,” details how animals like tigers, bears and pangolins, among others, are being bred in captivity for their meat and body parts. Nick Hanauer: Beware, fellow plutocrats, the pitchforks are coming. In world’s poorest slums, landfills and polluted rivers become a child’s playground. A girl plays with her brother as they search for usable items at junkyard near the Danyingone station in the suburbs of Yangon, Myanmar, in 2012. 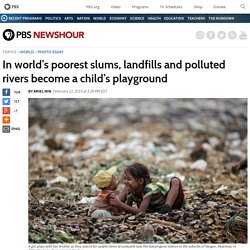 Photo by Damir Sagolj/Reuters Worldwide, more than 340,000 children under age 5 died from diarrheal diseases in 2013 due to a lack of safe water, sanitation and basic hygiene. How Nepal is trying to solve its blood brick problem. Business is booming in Nepal’s brick industry. 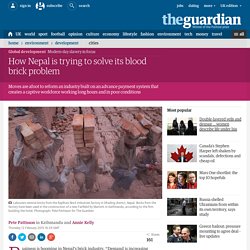 “Demand is increasing because building is increasing,” says Mahendra Chitrakar, president of the Federation of Nepal Brick Industries. “Each and every man wants to come to Kathmandu and build a house here.” Construction was ranked as the third largest economic sector in Nepal in 2006. High demand for building materials is in turn creating a huge demand for cheap bricks, often with little consideration for the human or environmental consequences.

Due to the seasonal nature of the job and the tough and demanding working conditions, brick kiln workers often come from marginalised and poor communities and have few employment alternatives. Many brick kiln owners ensure a steady supply of cheap labour through a system of loans and debt, which ties workers to the kiln for months or years. Tanzania accused of backtracking over sale of Masai’s ancestral land. Tanzania has been accused of reneging on its promise to 40,000 Maasai pastoralists by going ahead with plans to evict them and turn their ancestral land into a reserve for the royal family of Dubai to hunt big game. 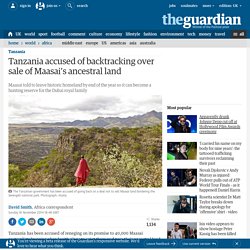 Activists celebrated last year when the government said it had backed down over a proposed 1,500 sq km “wildlife corridor” bordering the Serengeti national park that would serve a commercial hunting and safari company based in the United Arab Emirates. But now the deal appears to be back on and the Maasai have been ordered to quit their traditional lands by the end of the year. Maasai representatives will meet the prime minister, Mizengo Pinda, in Dodoma on Tuesday o express their anger. Predictive Policing Software. Dystopia Now: “Anticipatory Grief” or “Real Grounds for Hope”? Hundreds Of Bluetooth Beacons Secretly Track New York City Passersby. Update: New York City officials have told Titan to remove its tracking beacons from city phonebooths, Buzzfeed reports. 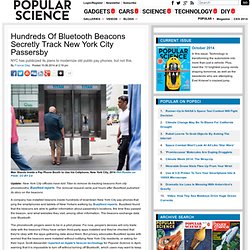 The removal request came just hours after Buzzfeed pubished its story on the beacons. A company has installed beacons inside hundreds of downtown New York City pay phones that ping the smartphones and tablets of New Yorkers walking by, Buzzfeed reports. Mining for smartphone minerals is eating up farmland. Doima, a small farming town, lies in the heart of central Colombia’s agricultural land. 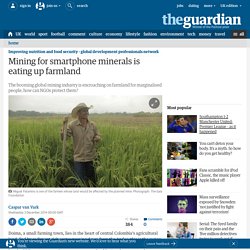 Fed by sediment-rich water running down from the Andes, this is the region where farmers grow rice, maize, plantain and beans for the whole country. A hundred kilometres away, however, a proposed gold mine threatens to change this fertile landscape forever. The mine, operated by AngloGold Ashanti (AGA), would sit in a steep mountainous area, but the proposed area for processing the mined rocks and building the tailings dam needed for storing the toxic wastewater would be the flat land around Doima, which is currently farmland. Jacob Appelbaum at European Parliament on Cyber War vs Net Peace.

The FBI Is Very Excited About This Machine That Can Scan Your DNA in 90 Minutes. Illustration: Dan Bejar Robert Schueren shook my hand firmly, handed me his business card, and flipped it over, revealing a short list of letters and numbers. 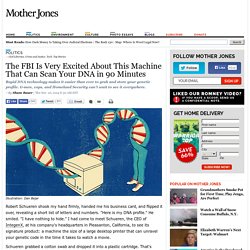 Leaked World Bank lending policies 'environmentally disastrous' Radical plans by the World Bank to relax the conditions on which it lends up to $50bn (£29bn) a year to developing countries have been condemned as potentially disastrous for the environment and likely to weaken protection of indigenous peoples and the poor. 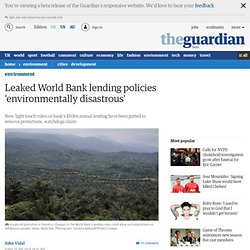 A leaked draft of the bank's proposed new "safeguard policies", seen by the Guardian, suggests that existing environmental and social protection will be gutted to allow logging and mining in even the most ecologically sensitive areas, and that indigenous peoples will not have to be consulted before major projects like palm oil plantations or large dams palm go ahead on land which they traditionally occupy. Stephanie Fried, director of the Ulu Foundation, said the leaked draft undermines World Bank president Jim Yong Kim, who has stated several times that existing safeguards would not be diluted as a result of the review. Eco terrorism.