Cindy Crawford and hubby spend $30K on nude portrait. Robin Williams: 9 memorable moments. Loisaltermark's suggestion. Watch as schoolboy aged NINE marries 62-year-old bride in controversial South African ceremony. What Powers Does President Obama Legally Have? Indonesia says it's 'not cricket' for Australia to spy for the US in Asia.

Indonesian foreign minister Marty Natalegawa says it is "not cricket" for Australia to spy on the region at the behest of the United States, adding he has sought clarification from his Australian counterpart Julie Bishop on an important issue of "trust". Natalegawa spoke to reporters in Perth after discussions with Bishop that he characterised as frank and candid. "If Australia was itself subjected to such an activity do you consider it as being a friendly act or not?

We are deeply concerned and it's something we cannot accept," he said. Natalegawa is in Perth for the annual Indian Ocean Rim Association for Regional Co-operation meeting. Friday's "please explain" with Bishop was sparked by media reports that Australia was using its regional diplomatic posts to carry out covert surveillance in Asia. "Trust is a process," Natalegawa said on Friday. "This is not an Indonesia-focus situation. 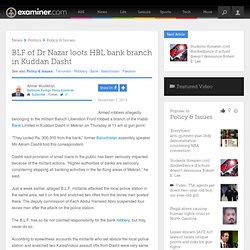 “They looted Rs. 300,000 from the bank,” former Balochistan assembly speaker Mir Akram Dashti told this correspondent. Yo Yo Honey Singh LIVE @ DUBAI on HOLI. Rt. Audit faults Boeing for overcharging US military The Boeing Corporation has overcharged or erroneously charged the US military at least four times in the past five years, according to a new report from the Pentagon’s inspector general. 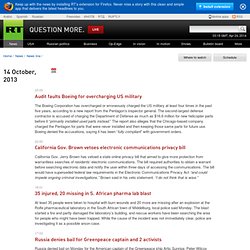 The second-largest defense contractor is accused of charging the Department of Defense as much as $16.6 million for new helicopter parts before it “primarily installed used parts instead.” The report also alleges that the Chicago-based company charged the Pentagon for parts that were never installed and then keeping those same parts for future use. Boeing denied the accusations, saying it has been “fully compliant” with government orders. ​ California Gov. California Gov. 35 injured, 20 missing in S. At least 35 people were taken to hospital with burn wounds and 20 more are missing after an explosion at the Rolfe pharmaceutical laboratory in the South African town of Middelburg, local police said Monday. 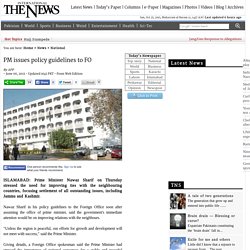 Nawaz Sharif in his policy guidelines to the Foreign Office soon after assuming the office of prime minister, said the government's immediate attention would be on improving relations with the neighbours. "Unless the region is peaceful, our efforts for growth and development will not meet with success," said the Prime Minister. Giving details, a Foreign Office spokesman said the Prime Minister had stressed the importance of regional consensus for a stable and peaceful Afghanistan. The policy of an Afghan-led and Afghan-owned process of peace and reconciliation will be persuaded, he added. Arabs press Iran on atomic reactor safety. Afghans angry at 'lenient' Robert Bales massacre sentence.

Residents of Afghan villages where a US soldier went on a rampage last year have reacted with anger that he has escaped the death penalty. 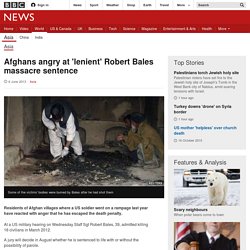 At a US military hearing on Wednesday Staff Sgt Robert Bales, 39, admitted killing 16 civilians in March 2012. A jury will decide in August whether he is sentenced to life with or without the possibility of parole. "WATCH ONLINE HERE HD Watch Iron Man 3 Online Full Movie 2013 Free Director By Shane Black Hit Top Box Office May" by Diet Ditcher. Obama: NATO to hold summit on Afghanistan next year. WASHINGTON -- President Barack Obama said Friday that NATO will hold a summit next year on the "final chapter" in its Afghan war and on a new training mission for after combat troops withdraw at the end of 2014. 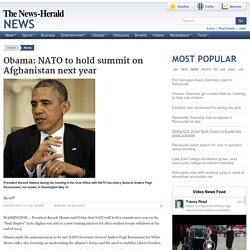 Obama made the announcement as he met NATO Secretary General Anders Fogh Rasmussen for White House talks, also focusing on modernizing the alliance's forces and the need to stabilize Libya's borders. But the US president would not say whether the talks also focused on the building regional security challenge posed by Syria's civil war, or any contingency plans that NATO might be making to intervene. Obama said he and Rasmussen talked about steps that could be taken after 2014 to ensure that "Afghan security forces are effective and can control their own borders and that NATO members can be assured that Afghanistan will not be used as a base for terrorism in the future. " Advertisement. The News-Herald Mobile. Tehran says U.S., not Iran, sponsors terrorism. 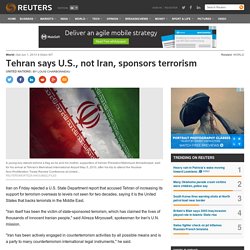 State Department report that accused Tehran of increasing its support for terrorism overseas to levels not seen for two decades, saying it is the United States that backs terrorists in the Middle East. "Iran itself has been the victim of state-sponsored terrorism, which has claimed the lives of thousands of innocent Iranian people," said Alireza Miryousefi, spokesman for Iran's U.N. mission. "Iran has been actively engaged in counterterrorism activities by all possible means and is a party to many counterterrorism international legal instruments," he said. The State Department report on Thursday cited a series of actual and planned attacks in Europe and Asia linked to Hezbollah, Iran's Lebanon-based ally, including a July 2012 bombing in Bulgaria that killed five Israeli citizens and a Bulgarian, and wounded 32 others.

Daily Times - Leading News Resource of Pakistan. Senate body recommends relieving PM’s son from NHA By Ijaz Kakakhel ISLAMABAD: Expressing their resentment over the transfer of National Highway Authority (NHA) Chairman Hamid Ali Khan by the interim setup, the Senate Standing Committee on Communications and Postal Services recommended that the interim prime minister’s son should be relieved from NHA, who was appointed on a senior post in the authority. 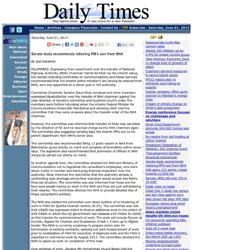 Committee Chairman Senator Daud Khan Achakzai and other members expressed dissatisfaction over the transfer of NHA chairman against the clear direction of Senate’s committee and Supreme Court’s order. The members were further infuriated when the interim Federal Minister for Communications Amanullah Mandokhel and secretary both told the committee that they were unaware about the transfer order of the NHA chairman. Track your twitter unfollowers.

Kurram offensive kills 17 insurgents. Palestinians warn that Israeli settlement plans could scupper peace talks efforts - Middle East News. Palestinian officials have warned that Israeli plans to build new homes in Jewish neighbourhoods of east Jerusalem could scupper efforts by US secretary of state John Kerry to revive Middle East peace talks. Yo Yo Honey Singh LIVE @ MUMBAI (4-12-12) Part 1. Dr Asim Hussain grilled by NAB for two hours. ISLAMABAD, May 30: Dr Asim Hussain, former adviser to the Ministry of Petroleum, was grilled for two hours by NAB investigators on Thursday for his alleged role in the controversial appointment of Tauqeer Sadiq as chairman of the Oil and Gas Regulatory Authority (Ogra) in 2009. 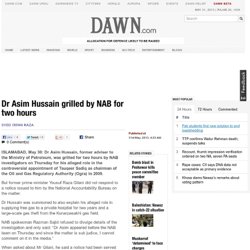 But former prime minister Yousuf Raza Gilani did not respond to a notice issued to him by the National Accountability Bureau on the matter. Dr Hussain was summoned to also explain his alleged role in supplying free gas to a private hospital for two years and a large-scale gas theft from the Kunarpasakhi gas field.

Latest News, Breaking News, Pakistan News, Pakistani News, World News, Business, Business News, Science and Technology, Entertainment News, Sport News, Cricket, South Asia, South Asia News, Memo Gate. Your app for TV, Movies, and Sports. The Kashmiri plight: Where is the justice? The presence of the Indian Army and paramilitary forces in the Kashmir Valley has been so long-lived, that it is difficult for the Kashmiri psyche to imagine a life without clusters of green camouflaged men shouldering rifles on every street corner. 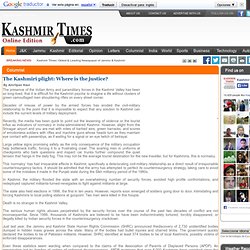 Decades of misuse of power by the armed forces has eroded the civil-military relationship to the point that it is impossible to expect that any solution to Kashmir can include the current levels of military deployment. Recently, the media has been quick to point out the lessening of violence or the tourist influx as indicators of normalcy in India-administered Kashmir. However, alight from the Srinagar airport and you are met with miles of barbed wire, green barracks, and scores of emotionless soldiers with rifles and machine guns whose heads turn as they maintain eye contact with passersbys, as if waiting for a signal or an eye twitch of betrayal.